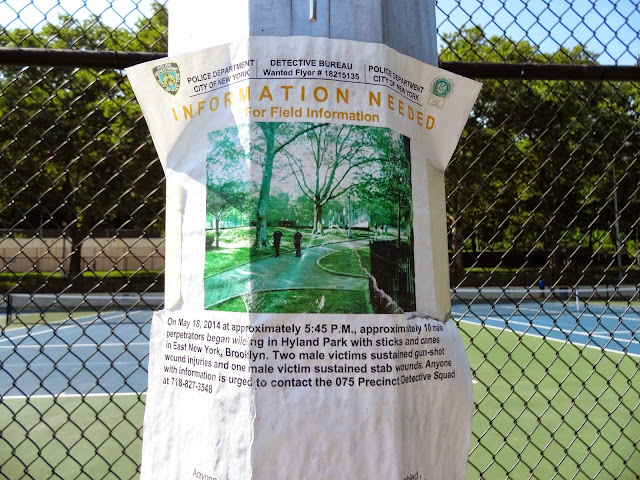 In what police describe as a "wilding" spree, authorities are asking for the public's help in tracking down a gang responsible for a series of vicious attacks which left two park patrons with gun-shot injuries and a third with a stab wound that required 40 stitches.

The bloody rampage happened in broad daylight on May 18, 5:45 p.m. when a group of men, believed to be in their late teens to early 20's roamed through Highland Park in East New York armed with sticks, canes, knives and at least one gun, police said.

Media reports initially said it was an altercation stemming from a basketball game. Investigators however believe the attacks were random and three separate incidents as the victims did not know each other.

A 18-year-old man reported being attacked by the gang and slashed four times in the left arm which required 40 stitches to close the wound. He told the police he didn't know why he was targeted.

A 17-year-old male was playing basketball when he was approached by a Hispanic man who asked, "are you Trinitarios?" (a violent New York-based street gang composed of Hispanics) The assailant then shot the teen one time in the left hip. The victim was treated at Jamaica hospital.

A 20-year-old man says he was walking in the park when he heard shots. He ran and he was struck one time in the right side of the chest by a bullet.

He was taken to Brookdale Hospital where he is expected to survive.

He told cops he never saw the shooter and doesn't know why he was targeted.

There are no cameras in the park.

And the NYPD is unaware of the correct spelling of Highland Park?
Posted by Queens Crapper at 12:17 AM

These white kids these days and their gangs and 'wildings' must be stopped!

"And the NYPD is unaware of the correct spelling of Highland Park?"

Those rascals of the NYPD! How could anybody have the temerity to mistakenly ascribe the name of Highland Park to John "Red Mike" Hyland?! Why that fellow couldn't drive a train and read a college textbook at the same time. Thoroughly unacceptable!

Oh, and perhaps something should be done about violent crime incidents in Highland Park after the silly wretch responsible for writing "Hyland Park" has been properly castigated. :D