Only bill supporters allowed to speak at ID card hearing 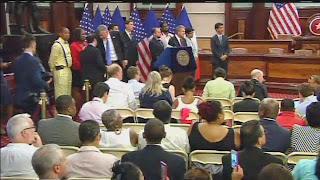 It is the latest sign of the blurred line between the two sides of City Hall. Mayor Bill de Blasio opted to hold a well-attended hearing on the city's municipal ID card legislation in the chamber where the City Council conducts its business. Mayoral hearings are traditionally held in the Blue Room in the mayor's wing of City Hall.

"I just think this is a really important moment to note the incredible teamwork between the administration and City Council in getting this done," de Blasio said.

An aide to the mayor said the location was chosen to accommodate the large crowd that turned out for the hearing.

Only supporters of the legislation lined up to speak. The New York Civil Liberties Union has problems with the bill, but did not testify. Sources say the administration was unhappy with their planned remarks.

(And you thought Bloomberg squelched free speech...)
Posted by Queens Crapper at 12:42 AM

Increasingly all our elected officials have problems with American citizens fulfilling our right and obligations to express our opinion and participate in the governing process in a meaningful fashion.

The lion's share of this years budget allocation was not determined on need and certainly on talent: it was determined on usefulness to the elected and pliability of the recipient.

This will all backfire soon, that's for sure.

they don't want to notice that they are practicing oppression which also is a violation of our civil rights.

This madness concerning immigration and nationalization is just like the citizen's united decision.Just a way to exploit people,get some leverage on the other party to get votes and power.Regardless of the fact that it can go against them.Citizen's united did not stop Obama from being reelected.He and the dems were able to fill their coffers too.The ID can't control how those with it will vote in the future,minds change once these new citizens are struggling and can't find work.

the city is slowly imploding,and the blaz thinks his one city should succumb to his plan.He's more concerned with the marketing of progress and diversity without considering the diverse voices who are against it or want accountability for the distribution of the IDS

Anonymous Said:
"This will all backfire soon, that's for sure."
What a naive comment, It won't backfire, it won't fail (Even if it does ACTUALLY fail) City Hall won't let it fail. If it does fail do you actually believe they'll let the public know about it? What color is the sky on your planet?

Isn't this local government circumventing Federal Laws? Why can't the voters/taxpayers have a say as to whether or not this should become law? Definition of illegal: Not lawful. Illegals will ignore the laws anyway. Why are we spending all this money on people who have no right to be here? If taxpayers must pay, they need to say so with their votes. What about all the people trying to get into this country the legal way? Why should they wait in line and spend all that money, when they can cut the line and get everything for free?

Just wait until the corruption starts. I am sure they will abuse the system somehow, some way.

Crappy, though the municipal ID is stupid, you're not being entirely honest here.

The reason the NY chapter of the ACLU does not approve of the card is that the city will hold on record pieces of information as proof of identity which the ACLU believes is a violation of privacy. The organization does not necessarily disagree with the ID card idea per se. And the article makes clear that the organization simply did not testify. Not that they were barred from doing so.

I didn't say the NYCLU was barred from testifying. I pointed out that they kept their mouths shut so as not to piss off the mayor.

How is it possible that not one person testified against this? It's not. This was orchestrated.

I thought the idea was that any documentation presented was merely reviewed and not copied.

When I heard this on WINS-1010, one person said "This is great. I have never had any documentation so I have never been able to get ID. Now I will be able to."

Really? No documentation, ever?

So now illegals can get on planes with their "official IDs". Hope none of them are terrorists. Citizens have to show their legal IDs to board. Interesting that No one has to show ID when they vote in elections.

Glad I left that freaking cesspool of a City 42 years ago, and never looked back.

I too am convinced that this whole plan will fail. It won't take long for the fake ID industry to move in and law enforcement agencies and private entities (financial institutions) start questioning the authenticity of these city issued IDs. I agree with the comment about voters not having a say in this from the outset.

can non illegal immigrants get these cards too?

"incredible teamwork" Ha! In other words, a conspiracy!

STALINIST TACTICS REPEATED....this is similar to the rules of a local civic that required all in the candidates night audience to write their question and submit prior to the candidates speak.
when the lib/dem incumbent cong. gary ackerman spoke ,the panel announced that no written questions would be asked of him.

he had just voted for the Obama--Afordable Care Act ,that Pelosi said had to be voted in ,to see what was in it.

the civic meeting became a shouting match, with ackerman stating "that if you could do better , why don't you run for congress " ?

He then did not run for office again.