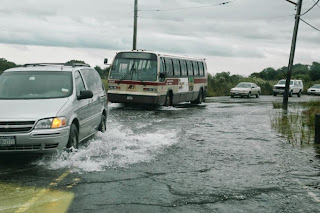 Relief may be coming to some Rosedale and Far Rockaway straphangers who have spent years suffering through long and crowded commutes.

The MTA wants to create a new, limited-stop bus line — the Q114 — to connect subway riders in Jamaica to those far-flung Queens neighborhoods.

"We have the worst commute," said City Councilman Donovan Richards (D-Far Rockaway). "You can almost get to Florida by plane faster than you can get to Manhattan."

Changes could come as early as Aug. 31 if all goes smoothly at a hearing planned for next Monday at the MTA’s headquarters in Manhattan.

Bus riders currently use the Q111 and the Q113, which has a local and a limited-stop line from Guy R. Brewer Blvd. into Far Rockaway.

The new Q114 route would replace the Q113 local with fewer stops between Jamaica and Rosedale to help hasten the trip.
Posted by Queens Crapper at 12:39 AM

A reformed MTA should institute mode neutral fares and price based on distance. A bus from Far Rockaway to Jamaica would cost the same as a faster LIRR ride for the same reason that express subways cost the same as local buses. Penn and GC might not have room but LIC, Hunterspoint, and Atlantic can take a lot more trains than they do now. Of course helping Far Rockaway commuters in this way would require modernizing operations on the LIRR, and getting rid of the union criminals fleecing the state. Don't let Cuomo bow down to the union if you want Far Rockaway to have better transit.

Anon No. 1At one point, Jamaica Buses charged an extra fare to ride the Q113 from Jamaica to Far Rockaway; riding the subway to or from the Rockaways cost an extra fare. It wasn't always a free transfer between the buses and subways, either. The extra fare went away because the elected officials listened to their constituents and demanded it. Can you name one elected official or candidate for office - from either party - who would support reinstituting the extra fare, or the zone fare system that you suggest? Who would support them aside from (possibly) the New York Post editorial writer? Non-starter.

Riding to Hunters Point Avenue or Long Island City - you're suggesting cramming more people onto the 7 Line? Have you ridden it lately? The same point holds for the subway lines that you transfer to at Atlantic Center.

Let's live in the real world.

The overcrowding on the 7 is east of Manhattan. 8am-9am less than 20k people take the 7 into Manhattan. 53rd and 60th street tunnels carry 27k and 25k. IRT cars are smaller, but there are more rail cars through Steinway (7) than the other tunnels. Maybe it's not a wash, but the 7 has room right before it goes to Manhattan, at least compared to the other lines.

From Atlantic? 8am-9am 4,5 carry less than 20k into Manhattan from Brooklyn, almost 26k from uptown crossing the 60th street cordon. You can fit more people there from Brooklyn. 23 have room though a bit less. BDNQR I don't know as well.

It doesn't really matter though. Because these aren't new riders for the most part. Where do you think people go after they get off the Q113? Maybe the E? The point is to better use existing infrastructure. The alternative is to let politicians through a hissy fit like they did when someone suggested having MetroNorth and LIRR share space and end up spending ten billion dollars that didn't have to be spent all so they never have to touch each other. That's the world we live in now. It's ridiculous and should be changed, it's not something to acquiesce too.

Plenty of people take buses from Westchester and Nassau into the city to hop on a subway because it's cheaper. And plenty of city residents take slower buses and subways when there are commuter rail lines that are faster, and when heading outside the city they take buses instead of trains too. Those rail lines sometimes, but not always, have room for people to stand. And given the upcoming capacity improvements on the LIRR it's criminal that there is no plan to stop pricing it to keep city residents from using the train.

Travelling within the 5 boroughs could stay a single price. It would reduce the benefits of a reformed payment system, but not eliminate them.

Just because there isn't support for it doesn't mean it's a bad idea, or that it won't happen. Time of day fares could help too to encourage people to travel off peak when they can. A nice cash incentive goes a long way.

Anon No. 3 Stand on a platform in the morning rush and try to get on a 4 and 5 west of Atlantic Avenue. You often have to let a train or two go by. The LIRR capacity improvements, if they actually happen are still many years away.

Off-peak fare reductions are a good idea, because they encourage people to use the system during those hours (particularly on weekends). Zone fares in the existing subway and bus system won't, because you'll be hitting a lot of people - in Queens in particular - with a major fare increase. Try selling that.

There are going to be less local buses under the plan as the Q113 local and limited will be made into Q113 and Q114 lines with the Q111 being the only local route. MTA fucks over Southeast Queens again.