"Mayor's Fund to Advance NYC" is full of notorious developers 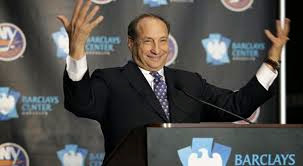 Mayor Bill de Blasio wants the city's parks and playgrounds to offer year-round equipment and recreational activites for adults and senior citizens, not only children.

The mayor presented that idea Monday morning, when he laid out several of his fund-raising goals during a closed-door meeting of the newly formed, 58-member board of advisers to the Mayor's Fund to Advance New York City, according to a document obtained by Capital.

His wife, Chirlane McCray, chairs the Mayor's Fund, a 20-year-old organization that solicits donations to bolster initiatives run out of City Hall.

The three-page document outlines three priorities for de Blasio and McCray, who met with the board at Gracie Mansion.

The first idea is upgrading parks, pools and playgrounds.

"In addition to the conventional park equipment for children and passive recreation space, the model envisions: multi-purpose equipment for adults and seniors; year-round programming for kids and adults; wifi connectivity; site specific apps complementing on-site programs; unique public safety elements grounded in community policing models - all of which will build on local community partnership and park 'ownership,'" according to the memo, which was distributed to those attending the meeting.

That program will be run jointly by the city's health, education and parks departments, the mayor's Community Affairs Unit and the NYPD.

And here are the members of the Fund. Miss Heather has the poop, er, scoop:

The Mayor’s Fund to Advance New York City Board of Advisors:

The names highlighted should get your attention. So much for the DeBlasios being real progressives. They're nothing but tweeders. Filling an advisory board with folks that have resisted and/or gotten around providing promised affordable housing, taken advantage of eminent domain for private gain, as well as a chick with an on-the-record a shady past, patners-in-grime with a slumlord who plans to use Newtown Creek environmental settlement money to build a hotel? What a joke.

You simply can't make this sh*t up.
Posted by Queens Crapper at 12:32 AM

Let's see Wilpon play his part. If he gets his mall, it better come with a grand pedestrian mall to connect the marina to the rest of the park. And let him pay for citibike expansion. The park is big enough that bikes to get around would be a nice amenity. The park has a lot of capital intensive needs. Like daylighting the river, replacing the decrepit fountain with a large field, reducing some of the excessive pavement etc...

such a vibrant and diverse group of citizens.a collective concerned with the needs of generation gentrification,the mediocre cerberus that is the movie,tv and music industry(buscemi,c.nixon,muse records,shame on you,especially buscemi),and the fountainhead behemoth tower developers and predator property owners.

look at the trends happening,not only in the past 13 years of chronic rubber stamping rezoning by the fun size mayor,but the alarming speed in just 7 months under the buffoonish mayor zero vision.Has he even hired a DOB comissioner yet?Is this why there isn't one and if there will be?Playgrounds for adults,why do they need it,the whole city is a playground for these immature idiots with their frivolous spending and disposable incomes.it explains that filthy boat club and the recent interest of filming in fort tilden and parts of rockaway(that stupid summer camp for grownups,comes to mind).

and so it goes here.under the guise of affordable housing and green spaces.that group that Prog Tweed and his faux lesbian wife assembled is proof that the parks are being privatized.The tale of two cities still exists,not only rich and poor,but now the rich and famous and poor and powerless.I envision the parks police getting militarized with kevlar,helmets and atvs to keep the norms away from the celebrities and hipsters that will take over.

The towns and parks are going to be unrecognizable in a few years.And we let this happen thanks to voter indifference and collective cynicism.either everybody moves or everybody gets mad.

no second term,and I think there should be a campaign to get his wierdo wife out of there.There's an unsettling vibe about her that she may have a bigger influence in policy making in city hall.

I think that using developers to improve parks makes sense - the Queens Museum and Queens Theater, Citifield, Tennis Stadium and Queens Botanical Gardens, all supported by developers, should contribute to Flushing Meadows.

Why go after the mayor? He has wide support in city council - take a look at the liberal caucus and its head - our own Jimmy Van Bramer who is treated like the second coming of Christ in the local media.

Is he not the mayor's boy as head of the Democratic Delegation on council?

How far do you think the mayor will get without the council's support.

If you want to stop the mayor, go after city council and their toadies that report nothing but wooonndderfuull things these very common and very flawed people do.

But wait: there's a regulation prohibiting adults from entering playgrounds unless accompanied by a child. Where is this year-round equipment for all ages going? -never mind; it'll all be in Manhattan and select areas of Brooklyn.

I think developers should be required to add to the neighborhood - schools, libraries, parks - specific tbd by community.

I think the lesson to be learned here is if you dole out $10,000 to a lobbyist to court DeBlasio's wife (as Mr. Argento did), you WILL get a seat on the Mayor's fund. Character does not count. I wonder how much $$$ was outlaid by the rest of these folks?

What's wrong with 'generation gentrification' JQ? Isn't that just young people moving into new areas just like every generation has done before them?

Use their funds to build a prison. Then lock them all in it and throw away the key.

That Van Bramer is a piece of work.

these young people are stupid and spineless,willing to wait hours for food and to pay exorbitant rents to live in a hot locality.

this generation is different and its the worst ever.that is what is wrong with them.They need to be stigmatized,as with that mayors board of advisors.


and why do they need 57 advisors anyway.how big is the table when they get together.it must look like skull and bones.Its more of a cocktail party than an organization to improve parks.