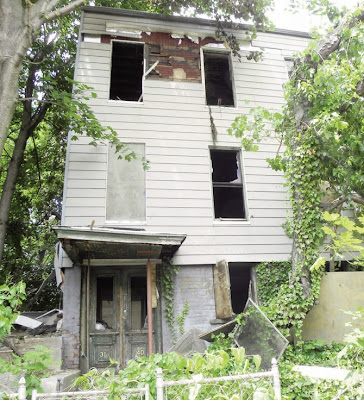 Fire marshals are looking into the cause of a stubborn, smoky fire on the afternoon of June 10 that destroyed a vacant home on 47th Street in Astoria, fire officials said.

Twenty-five fire units and 106 firefighters responded at about 4:30 p.m. to the two-alarm blaze at 31-40 47th Street that sent one firefighter to Mount Sinai Queens with burn injuries, a fire spokesperson said. Several other firefighters were treated for smoke inhalation and other injuries at the scene.

Fire marshals arrived at the scene a short while before the blaze was brought under control, to begin combing through the remains of the building to determine exactly what sparked the fire. Fire officials would not say if the blaze is considered suspicious.

I think I have the answer:

LOL!
Does Tommy "the torch" Huang own it?
It looks like shades of Flushing in the early 1980s, when urban renewal through arson was method de jour.

Something to look forward to when all of Queens is Vallone's district.

Why is it ok for a absentee landlord to do this to a perfectly fine building over a period of years while 10 seconds on a parking meter results in a fine?

Looks like a great old building that could have been restored and made very profitable.... but for the greaseballs who live in Astoria and who have the vision of a mole.

Folks...I live near that house. The house was owned by a former firefighter who died a few years ago. He was single, never married, no children. The owners are his parents and siblings (although the deed is still in deceased's name) who live out on long island under one household. For the life of me, i don't understand why they don't sell the damn property. They still pay property taxes - what a waste! I warned the neighbors about the dangerous and weak condition of the large trees on the property last year and gave them the address and phone number of the owners, but it looks like they never did anything about it.

Very neat!
They saved money on a demolition job this way and the insurance covers the loss when something new gets built.

LOL!
Maybe you can get it landmarked.