Weiner was a lame congressman well before scandal 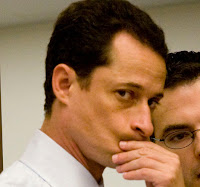 In 12 ½ years in Congress, he sponsored and wrote only one bill that he steered to enactment: a measure pushed by a family friend who gave his campaigns tens of thousands of dollars in donations.

To his admirers, Anthony Weiner was a tireless spokesman for an endlessly changing array of issues in the House. But offstage, those who worked alongside him say, Mr. Weiner was a lawmaker with little patience for making laws and a single-minded focus on generating attention so he could run for mayor of New York.

He earned admiration for his devotion to his constituents. He inspired aides with his quick grasp of difficult subjects, his relentless pace and his office catchphrase: “We don’t wait.” And he impressed local officials with his shrewd use of the machinery of the federal government.

Yet the more lasting impression left by Mr. Weiner, according to more than three dozen people interviewed, was of a go-it-alone politician whose legislative record was thin and whose restlessness could spill into recklessness. He smartly selected issues on which to weigh in but left the difficult legislating to others, they said.

Things haven't changed much. Now he's talking about bowling alleys and defending his tweeder wife from an investigation.
Posted by Queens Crapper at 12:53 AM

"Weiner was a lame congressman"

"Weiner was a limp congressman"

I'm pretty sure that I cribbed his lunch money in Elementary school...

A typical windbag politician,plain and simple.

This man needs a tranquilizer!
Every time he speaks he goes into warp drive...blabbering about 100 words per minute.

What's his message after it's all over?

Damned if anyone knows.

Go on...vote for the idiot who sends an e-mail postcard of his Johnson online, for anyone to hack into.

This is what passes for a lawmaker...an egotist who doesn't even understand the internet isn't private?

You...out there...are what passes for idiot voters if you choose to vote for this hot dog.

This article belittling Weiner confirms the view that NY Times will do anything to help its preferred candidate Christine Quinn.

I originally said he had to use his money in the fund or return it to the people. Why return money, when he can get his much needed press . His ego needs the press. As a Mayor he would make nyc the laughing stock of the nation.

"YOU" voted for him.

There will be plenty more to come.

I still say he has the looks and the appeal of a Grasshopper.

What did Huma see in him?

Weiner, the dickwad: “Never again in this country should you say because you don’t have a full-time job or because you maybe got hurt at work or you’re an undocumented person [translation: Illegal], that you don’t get healthcare...If I get the opportunity to be in charge of this city and this economy, I’m going to make sure that we–for the first time anywhere–have a single-payer healthcare system that covers all of New York.”

“I like the sound of that, it would be nice if it happens,” responded the moderator, as a wave of cheers passed through the church."

Folks, it takes me 2-3 months to book an appointment with a specialist through my HMO right now. My primary care physician said that when Obamacare goes through, it will take 6-9 months to see that same specialist.

Single-payer? 1.5-2 years, he told me. But then you won't need the specialist for by then you'll have died of your ailment.

If you keep going on about the Eloi, should we start to refer to you as "George the Morlock"?

Love the H.G. Wells "Time Machine" reference...
but history will repeat itself with Queens' dumb voters.
You don't need a time machine to return us to the past.

Each time we put an idiot in office we step back at least 25 years into the stone age.

LOL!
No wonder our borough has become the laughing stock of NYC.

I'll save my jokes about "The War of the Worlds" for another location.

did not the teleprompter president tell seniors that their permiums would not increase under obamacare?

where do fixed income seniors get the $$$$? we can not print the $$$ like Obama.