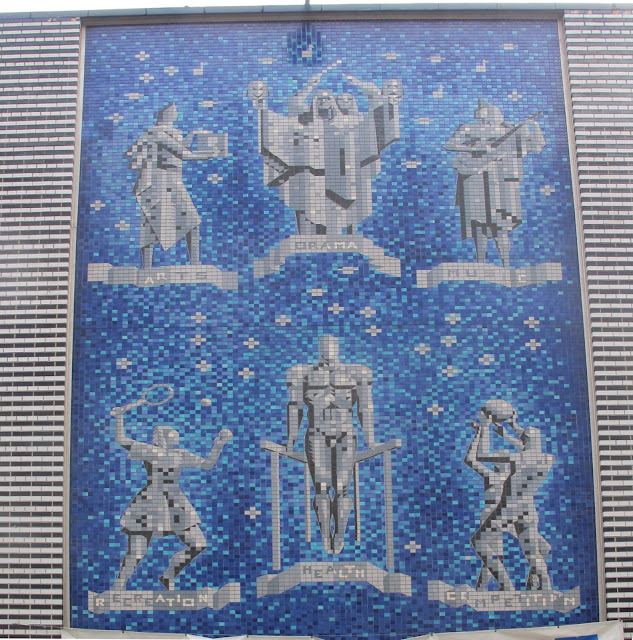 A sprawling mosaic that has long been a symbol of City Tech in downtown Brooklyn will be destroyed when the Klitgord Auditorium gets torn down sometime this summer.

The massive mural, built on the Jay St. theater in 1962 by famed African-American sculptor Nathaniel Choate, will make way for a $400 million educational complex expected to open in 2016.

School officials said only part of the mural — the school crests flanking the main artwork, but not the six figurines celebrating sports, recreation, health, competition, drama and music — could be salvaged.

“This is a loss of history and contact with the founders of this institution,” said English teacher Mary Nilles, one of several teachers who spoke against destroying the artwork.
Construction on the 400,000-square-foot college building will start as soon as the aging auditorium - including Choate’s 33 foot by 17 foot mosaic - is razed.

Choate’s work is on display at several other locations including Harvard University and the National Academy of Design in New York. 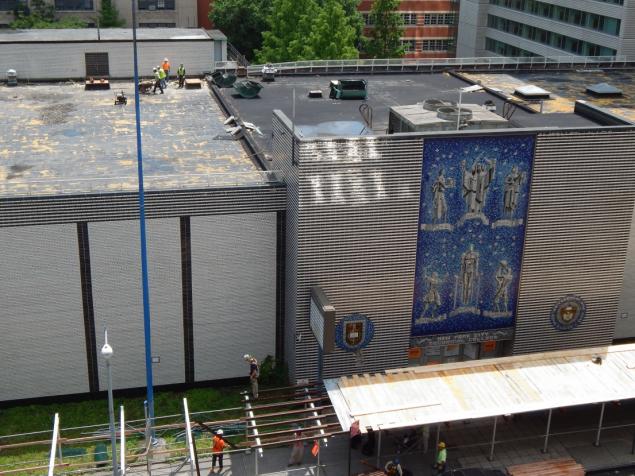 If CUNY doesn't appreciate Mr. Choate's artwork, can't they at least donate it to an institution that will? Brooklyn Museum, Brooklyn Historical Society, etc.?

It's embarrassing to be a CUNY alumnus these days. Sheesh.
Posted by Queens Crapper at 12:49 AM

The Brooklyn Museum has a municipal sculpture garden in the back of their building. Everything there is mostly of smaller scale, but that's the right place.

Looks like 6 inch tile. all they need to do is number and remove them with an ultrasonic pic and crate them.
Is the city to cheap to put a couple guys on the job ?
Where is Rev. Al ?

Rev Al is too busy with his mistress and basking under the halo of his own self absorbed creation.

In the pursuit of so called "progress", we are raising a nation of avaricious barbarians.

Only "the dollar" counts these days!

Maybe that's so. Rents are skyrocketing and our expendable income is shrinking. It's a fierce competitive world out there, and only the king rat gets his kingly share of the cheese.

What really sickens me is--we keep on clamoring about the "younger generation's" lack of appreciation for the arts, history and culture--while we teach them, by our own examples, to destroy it.

By all means--move the mosaic panel somewhere!

The heck with Rev. Al. Where are Brooklyn's elected officials?

Dear Readers. I've got to be honest with you all. Nathaniel Choate? I never heard of the guy until now. Be honest, have you?

get some graffiti artists who were arrested to remove it as their community service.

Im sure if someone is willing to take it, pay for its removal, and pay for its re-installation, and have it done ASAP so the rest of construction is not delayed, they would gladly let someone have it.

I'm sure their decision is financial, and not out of spite.

not everything is a conspiracy.

They knew for years that this was on their agenda. I'd love to see who they contacted about preserving the mural. I'm sure the answer is no one.

A 400 million dollar educational complex is in the budget, but not a few thousand dollars for preservation of artwork? This society is doomed,

Walked by the big mosiac piece when the guys started to put up scaffolding. There is another name on the bottom of the blue piece. A person named von Tury, Perth Amboy, NJ. OMG He also was a really famous designer and craftsman. Can the Brooklyn Borough Prez help save this artwork?
John

CUNY - Hunter has a conservation course - this would be a great "studio project" with deliverables, for a change: explore how to make it happen, and MAKE IT HAPPEN.

"Hunter has a conservation course"
From what I understand CUNY is a "union house" nobody touches anything unless they are in the local union.--And these unions and "father and son" operation's hate conservationists.

Same shit in Corona park, the useless parks dept "family" and unions wont let expert conservationists touch anything without a hoopla of red tape and "special interest".
(Example: If something or section of wall is needed for a photo op they will let volunteers do it)
There ALSO must be no pay involved not even for materials, not even gloves or paint !!

you must be kidding! what are they, a bunch of Nazis!

"Nazis"
Yes basically, this must be one of the most corrupt city's in the world. Worst then the Maximalists or boss Tweed administration of 1867 take your pick.
Its criminal how so many structures are being destroyed to make way for babysitting services called schools.
I wonder how long it will before some "official" comes for your spare room or unused basement if you own a private house.
The Bloomberg mob is demanding 1 million more living spaces in Queens for the offspring of illegals by what 2020 ? And what will these "diverse" people do for a living aside make more baby's to get gov $$$.
Why do you think the scumbags want to grab all the guns and throw your rights and civil liberty's down the toilet ?

That's when Open Admissions was instituted. Any moron as well as scholar thereafter was guaranteed a place in a CUNY college. The radical Eloi class, today's "free health care" and "kill my landlord" collectivists demanded and got what they wanted.

Some of you may remember the late Jerry Nachman, Koch's press front, newsman, and radio talk show host. Jerry constantly was on the radio telling the listeners that whenever his CUNY friends are asked where they graduated from they replied: "CCNY...before", "Queens College...before "Hunter . . .before". The "before" meant prior to June 1969.

I showed up at my CUNY campus in those days and found the radical Black Student Union had chained the gates while they sang "Power to the People" over and over. I had to get back on the subway and go home. My English professor was assaulted in his classroom while radicals ran riot through the building. My history professor held classes in his apartment.

(What still amazes me is that the "elite" public high schools, Brooklyn Tech, Stuyvesant, and Bronx Science, escaped and still escape the wrath of the Eloi.)

June 1969: the watershed. Then Mayor Lib Lindsay folded like a cheap camera to the marauders. September 1969 saw the beginning of the CUNY decline.

Asshole...
what do "graffiti artists" have to do with this story?

Stick to the point, or stick it up your butt hole.

In H.G. Wells' "The Time Machine," The Eloi are the childlike, frail group, living a banal life of ease on the surface of the earth, while the Morlocks live underground, tending machinery and providing food, clothing and infrastructure for the Eloi. In Dan Simmons's Ilium novel, 'Eloi' is a nickname for the lazy, uneducated, and uncultured descendants of the human race after the post-humans have left Earth.

Of course that reflects real life.