Worker trapped where he shouldn't have been working 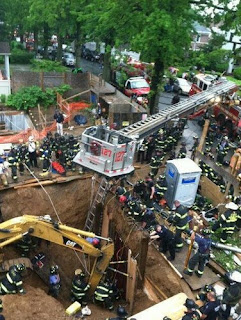 The worker was pinned under the pressure of hundreds of pounds of mud. Every time rescuers thought they'd be able to pull him out, he kept sliding deeper in.

"He was facing forward, but his legs were going back under him," said Chief Richard Portello of the FDNY Rescue Battalion.

Firefighters got the call that the man was trapped in the 25-foot hole at about 5 p.m. Tuesday.

The victim's brother said he was working and tried to release a chain but was buried in dirt up to his chest.

The Department of Buildings said the crew was doing excavation work for a home that does not have a permit.

A stop-work order was issued when inspectors found workers had failed to install proper shoring that likely contributed to the collapse.

Having lived a block away for 10 years, I know this property well and am not a bit surprised. There used to be two single family homes on the lot. For years, the property was a weed and trash infested mess surrounded by a poorly constructed plywood fence that kept falling down and blocking the sidewalk.

I've called 311 several times over the years to complain about the high weeds, cracked muddy sidewalk, and dangerously leaning plywood barrier. The developer is a scumbag and I wish the city would seize the property and auction it to pay for the unpaid fines as well as the fire department and ConEd response to this latest fiasco.

No approval or permit for a new building either!

Does anyone else find it strange that DoB issues a "Stop Work Order" when the work should not have been started to begin with? Business as usual: fines will (probably) be paid, then work will start again. Perhaps we need to kick it up a notch - maybe confiscate the property,something that will grab these idiots' attention. Also get OSHA enforcement. Essentially, they are putting workers' lives at risk, as well as the lives of people who may someday use the building (plans? inspections?)

Don't worry the caring and competent Borough President of Queens, Helen Marshall, is rushing to the site to help pull the guy out.

This is why more than ever we need to elect Senator Avella -- as Borough President and Paul Graziano as Councilman. No more lame ducks representing us. No more corrupt politicians with personal agendas. Commissioner LiMandri should resign -- as the Senator has previously demanded.

WHAT HAPPENED HERE AT THIS SITE IS UNBELIEVABLE. THE DOB should be held accountable. Clearly, they were not suppose to be excavating without permits.

THE DOB SHOULD HAVE PADLOCKED THE SITE.

There are no approved plans for any new building. There were no Permits issued to excavate. There is a permit for equipment/
construction fence.

Immediately Hazadous Violations were issued in the months of February and March.

Re: WORK BEYOND APPROVED PERMITS, FOUNDATION EXTENDS ALL THE WAY TO THE REAR PROPERTY LINE, IT SHOULD SHOULD STOP 30 FT FROM NEIGHBORING PROPERTIES

FAILURE TO PROVIDE PROTECTION AT SIDES OF EXCAVATION. NOTED: EXCAVATION APPROX 15FT TO 20FT DEEP DOES NOT HAVE SHORING ALONG EXPOSURE 2,AT FRONT,SOIL BEGINNING TO SEPARATE,APP #440031190. REMEDY: STOP ALL WORK.

UNLAWFULLY CONTINUED WORK WHILE NOTICE OF A STOP WORK ORDER

FAILURE TO INSTITUTE/INSTALL GUARD RAILS/FALL PROTECTION. NOTED: NO GUARD RAILS ALONG SHORING W/A DROP TO BOTTOM OF AT LEAST APPROX 15'-20'TOP OF SHORING IS LEVEL W/EARTH WHICH IS COVED W/FROZEN GROUND & ICE-

FAILURE TO PROVIDE APPROVED PLANS. NOTED: PLANS INCOMPLETE,SET BACK ON PLANS NOT SHOWN. NO SURVAYOR STAKE OR "OFF SET" FOR STAKE,NO SHORINGPLANS ON SITE. NO SHORING AT EXPOSURE 1-2 CORNER,W/SHEAR CUT PLACE

Great posting! Tony and Paul G. are honest and will affect change, as opposed to the Vallone Crime Family!

There is no rule of law folks so that why you can do what you want and find those folks in serious trouble to save ....... We have gone to SHI&!