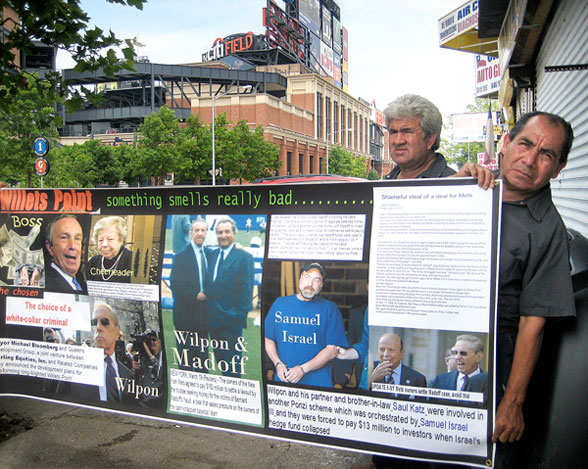 The city again shut down a group of Willets Point businesses that lie in the footprint of a $3 billion redevelopment project set to begin early next year, while talks about a detailed plan to relocate the auto repair shops to Maspeth have been stalled since October.

Inspectors from the city Department of Buildings, acting on reports from the NYPD, shuttered about 10 businesses citing unsafe construction conditions June 13, according to business owners.

“They want to kick everybody out this way,” said Marco Neira, a tenant in Willets Point.

The closings came on the heels of another round of inspections in May. Several shops were closed then near the corner of 37th Avenue and 126th Street, although the city offered to make repairs in that case.

The department characterized the latest round of inspections as routine, but business owners wondered about the timing.

The buildings housing the businesses have existed for decades, they said, but the violations are being issued about six months before developers hope to begin transforming 23 acres of the Iron Triangle into a new mixed-use neighborhood.

It's amazing that the DOB can spend so much time at the Iron Triangle - where no one called in complaints and issue vacate orders to businesses renting from the City - but doesn't have the manpower to resolve illegal conversions in residential zones.
Posted by Queens Crapper at 12:56 AM

Is there another (not so hidden) agenda?

Of course relocate the junk yards to Maspeth - thank you that makes my day folks! Maspeth and Elmhurst - the dumping grounds for housing illegals and pushed out of Manhattan Chinese - Maspeth houses all of those that Brooklyn no longer wants and now will house cast-off businesses from Scummy Willets Point!

Don't feel lonely - we have tons of illegals shitting up the place in Flooshing as well!

Now they go through our garbage at night - it's a lovely ghetto touch! Meanwhile they all drive Mercedes and use food stamps. Such a totally corrupt and morally-bankrupt culture!