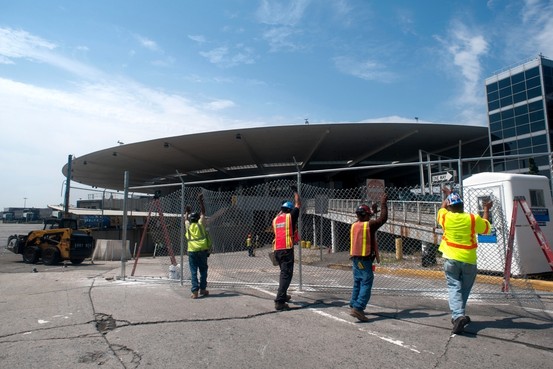 Advocates for the now-vacant Worldport terminal at Kennedy Airport hope their preservation efforts will gain momentum with the bittersweet designation of the former Pan Am building as one of America's 11 most-endangered historic places.

The annual list, compiled by the National Trust for Historic Preservation and slated for release Wednesday, selects architectural and cultural heritage sites in danger of destruction or damage. The flying-saucer shaped Worldport, long-slated for demolition to make room for more operating space at the airport, was cited for its symbolic jet-age architecture.

Constructed in 1960 by Pan American World Airways, the building was known for its large elliptical roof canopy, measuring 450 by 350 feet, which allowed aircraft to taxi under it, providing protective covering for passengers between the plane and the terminal. It was famously featured as a backdrop for the Beatles as they departed on a Pan Am Boeing BA -1.76% 707 after their 1964 U.S. tour, and epitomized the glamour of jet travel in movies such as "Come Fly With Me" and the 1962 "That Touch of Mink," starring Cary Grant and Doris Day.

Delta Air Lines DAL -1.48% assumed the building and other Pan Am assets when the carrier collapsed in 1991. Renamed Terminal 3, it was in use until May 23, when Delta opened the adjacent $1.4 billion Terminal 4 the next day.
Posted by Queens Crapper at 12:35 AM

I always thought it was a flying saucer that touched down at Kennedy because of warp drive engine trouble.

Now it looks like it's time for these space aliens to climb back aboard and fly away back to their home world.

Once again, the disrespect to Queens aviation history continues...

What's next? Hardly anything left.

It is located only a mile east of present-day La Guardia Airport.
Flushing Airport was opened in 1927 as Speed's Airport (named for owner Anthony "Speed" Hanzlick).
It became the busiest airport in New York City for a time."

Goodyear used Flushing Airport as a mooring site for its 2 blimps during the 1964-65 World's Fair and at least one blimp used the site every summer until 1976.

The owners of the former site of Holmes Airport in Jackson Heights (Bulova) were unaware that they're sitting on the former aviation site. According to Wikipedia, "The new airport opened on Saturday, March 16, 1929, attracting 100,000 visitors on its second day of operation.Later that year, the first scheduled flights from New York City began when Eastern Air Express started a two-day service to Miami from Holmes.

In April 1930, thousands of people paid $1.00 for a ride in an airplane. It was promoted as an experiment to ascertain whether it was fear or the expense that kept the public from flying." Goodyear built a hangar at the airport and operated a sightseeing blimp from Holmes all year long.

Rockaway had an army base (Fort Tilden) and it was the site of the departure point of the first transatlantic flight. According to Wikipedia, "Fort Tilden today is largely a natural area of beach, dunes and maritime forest. Most of the old military installations are abandoned, though some buildings have been renovated and are used by local arts groups. Atop one of the old batteries, Battery Harris East, is a viewing platform offering 360-degree views that encompass the city, New York Harbor and the Atlantic Ocean. The area is popular with bird-watchers and other nature-lovers and is widely used for fishing." Nice but recognition as a former aviation facility is lacking.

So little by little, an important parts of Queens' aviation history disappears with little or no recognition of its historical importance. Sad. Kinda like the homage given to a historic sports venue, Shea Stadium. Once the parking lot is developed (I personally hope it doesn't happen), future generations will hardly know it was there!

I wish the preservationists the best of luck but history shows the disrespect given to Queens' historical sites. Can this be different?

Sad to see it go.

Remember going to the airport with my parents in the late 50s / early 60s. Very exciting times. So much energy with all the construction. The NYDN had many Sunday magazines sections showing the new architecture; the TWA building, American Airlines and the Pan Am Building.

Add in construction of the Throgs Neck bridge and Clearview Expressway the extension of the LIE past the fair grounds (also under construction) and the Verrazano bridge.

Whatever happened to us ?

Here's a way to join others in the effort to support the terminal's preservation:

"Despite the excitement, we also want to call attention to the word "endangered." This means the building is far from safe. And so we also hope that this announcement will motivate architects, engineers, politicians, preservation organizations and potential investors to share our vision and become actively involved with the campaign to save this irreplaceable historic landmark."

Let's say NO to destruction of historical sites. Please do your part to lend your voice to this cause. Thank you.

Culturally, added to the Beatles' invasion, the many celebrities and dignitaries spotted there, James Bond’s Live and Let Die, and the 35+ movies and tv shows, Gene Roddenberry, author of Star Trek, and former Pan Am pilot, got the idea for "Starship Enterprise" from Worldport's design.

Artistically, it’s one of the most beautiful examples of Mid-century Modern Architecture in the US. The Modernist Movement is a re-popularized, celebrated art form of worldwide significance.

Historically, Pan Am created a fundamental shift in how people travel. Worldport’s innovation was being the first terminal "to bring the plane to the passenger.” It marked the beginning of the Jet Age and was the commercial birthplace of the Boeing 747 Jumbo Jet. Worldport exemplifies the epitome of inventiveness that characterized the post-World War II era. Our nation was at its height of innovation and booming economy. The 50s-60s was a time of great change in American culture, art, architecture, and engineering. Back then—Americans did some pretty amazing things—and Worldport was one. We ‘wowed’ the world with our accomplishments and inventive American way. Worldport is an example of that “wow factor.” As Americans, we need to preserve it as a reminder—of who we are—and what made us great. That’s the essential reason we need to save Worldport.

Progress is unavoidable, especially at busy airports where space is at a premium. We understand old buildings must sometimes make way for new buildings that can handle today's volume of traffic and security concerns. But sometimes historic buildings are just too important to lose, especially ones as unique and irreplaceable as the TWA Flight Center and the Worldport. These buildings represent an important era in aviation, architecture, American history, and human progress. Every effort should be made to integrate them.

Likewise with Grand Central is we are faced with a similar dilemma: what to do with a worn out building that has served its purpose? I quote Anthony Stramaglia, one of the campaign founders, “I think a lot of people miss the point of preservation and what the proposed uses are…and just blurt out that ‘it's falling apart and obsolete.’ Sure it's obsolete for certain things, but isn't that the point of adaptive re-use—to find a new use for buildings that have outlived their original purpose?”

We believe the original Flying Saucer terminal, like the TWA Flight Center, which only cost $20M to renovate, is an important part of aviation and architectural history. Though horribly neglected and left in disrepair, it is absolutely worth saving! We think it would cost less to restore and repurpose than the $215M in taxpayer funds (yes!) Delta stands to receive as reimbursement for demolition.

As to other arguments with our efforts, Anthony adds, “It's obvious that part [the saucer] is a mess…but, Delta has largely let it fall into disrepair for years, so you can’t put all the blame on the building. It's amazing the thing is in as good a shape as it is for the neglect it's suffered. That's testament to the workmanship and materials that went into building it. The other issue is that it looks even more of a mess cluttered with that hideous AirTrain walkway/elevator and the T2 connector that Pan Am added [and the various shop signage, interior walls, and security barriers added internally in later years]. And for the love of all that is good, they could have at least washed the windows once in a while.” (I love that part.)

It seems that some people's perception of preservationists is that they're just nostalgic "building huggers" who scream and cry when buildings are threatened and have no real solid plan of action. Maybe some are, but not us. Our campaign group has put in solid, sensible thought and effort. For more information, go to our website: http://www.Savetheworldport.org. There’s an easy way to link to the petition on our home page. And please follow us on Twitter: @saveworldport (no ‘the’)

Look when they mucked with the TWA building - that was truly an awesome building: they killed what ever=else significant at JFK - little.

JFK is a horrible airport in a world-class city - The US Govt portion reminds me of entering a 60s Soviet building ..

It looks like "The Jetsons" are losing their home.