Just thought you might want to see the literature that is being handed out about each candidate. Some are clearly done quite professionally, and others, not so much. I'll let you vote on which is the best. 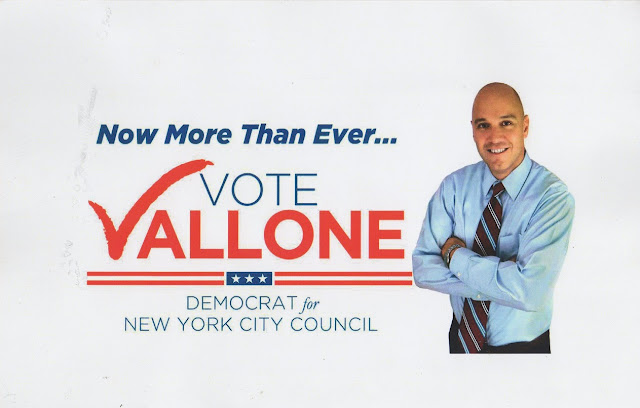 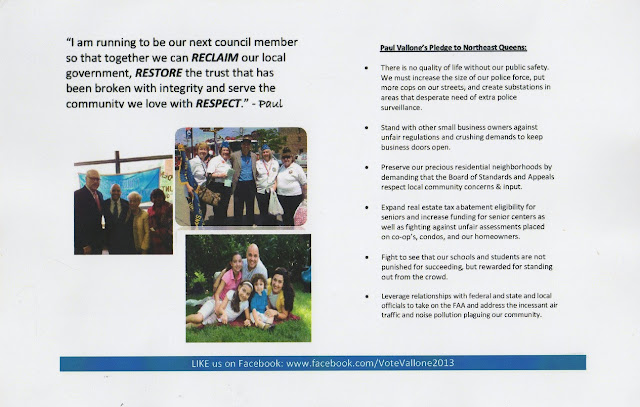 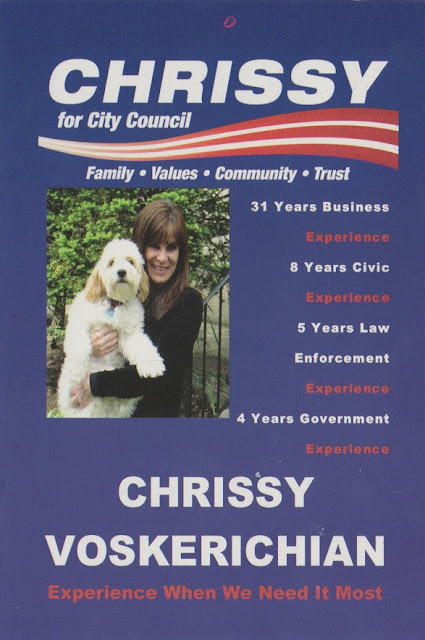 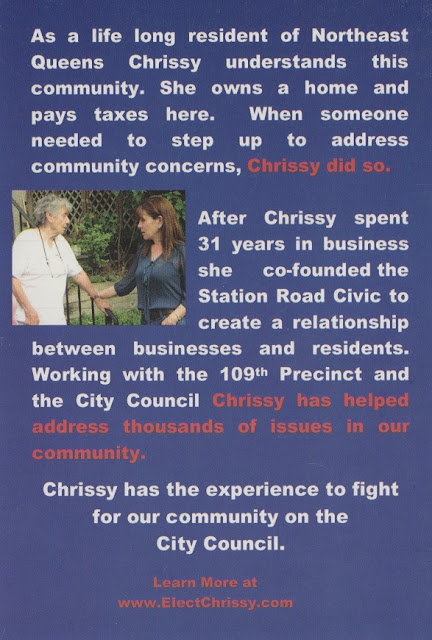 Free Web poll for your Web site - freepolls.com
Posted by Queens Crapper at 12:41 AM

Hoo boy...where do I begin.

I think the most interesting thing about these palm cards is what each candidate has left out:

Duane: He was only elected to one term in the Assembly (1982-84). Where have you been for 30 years while my neighborhood got fucked up by developers?

Shafran: He was press secretary for indicted Senator Malcolm Smith. Not a resume builder in my book.

Vallone: He lost the 2009 election badly and, according to last week's piece on QC, feels the need to cut the line on a regular basis in the game of life. Seems like a Vallone trait.

Voskerichian: She was Chief-of-staff to indicted Councilmember Dan Halloran for over 3 years.'Nuff said.

Graziano: The only thing I can say about him is that he's done a whole bunch of things (besides what's mentioned on his palm card) for the community for free over the years, including in my neighborhood. Maybe he's a sucker for doing all of that - I probably wouldn't, but hey, I'm not a community activist - but he seems to be an honest guy who actually cares.

Based on that, and his endorsement by Tony Avella, who is definitely a stand up guy, I think I'm voting for Graziano.

Where's his rocket pack, tights and cape?
Doesn't Vallone look like a comic book "Bulleteer"?
Look at the way he scrunched his photo to look thinner.

I guess it's a hell of a lot easier than losing 20 lbs.

Nice dog, Chrissy.
Do you think posing with it will make you more electable?

I don't know much about the candidates since I am not in this district, but if this is a way for them to try to make a positive first impression on the public, I think some of them totally missed the mark.

Duane: It actually looks like he hired someone with some knowledge of graphic design. I don't care for the pale colors. He lists his accomplishments concisely and provides his website address, twitter and facebook info. Overall, not bad.

Graziano: This, by far, is the best designed palm card of the bunch. Nice color balance, professional-looking photos, and probably the most important endorsement in the race. The text hits the main points.

Shafran: We know he didn't work "with Governor Cuomo" but rather for the state senate democrats, who have recently found themselves in quite a pickle. And I'm sure when this was designed, Cuomo was riding high and Shafran thought it was a good idea to drop his name, but now he's on a slide in the polls, and this could come back to haunt the candidate. Overall, not a bad design, however.

Vallone: Yikes. Don't know where to begin here. The front has way too much white space. The candidate's photo looks stretched vertically - maybe that's intentional, maybe not. He looks silly being cut off at the waist, however. On the back, the photos are too dark to see. There are major grammar mistakes in the quote, first, second and fourth bullet points. There is no mention of the candidate's website, but a link to his campaign's facebook page. Hard to believe this is a County production, especially without a union seal on it.

The palm cards all suck. Graziano has a "Forced Smile" plus a cliche handshake picture. Vallone didn't "Scrunch" His photo. Chrissy has a shitty printer. Shafran has someone that knows how to composite photos. John Duane needs help with his photos. If you're going to vote for someone based on palm card quality, there's nothing here to vote on.

These palm cards are misleading, and I don't mean what they're trying to sell.

I was at the 19th District candidates night last week and took each one of these. Graziano and Shafran had normal, relatively well-designed cards.

Duane's was a regular-sized printed piece of paper. It only vaguely looked like a palm card if you folded it in half, and it got ruined when I went outside (it was raining).

Vallone's looked like he had someone's 13-year-old niece or nephew design it, stretched out photos and tiny, tiny grammatically incorrect text. Terrible. And the size of the card was weird.

Chrissy's was a tiny square - you make it seem much bigger than it was, Crappy. Also looked like it was designed by a 10-year-old. And, as someone mentioned before, who puts a stretched-out picture of yourself with a little dog on the cover? If you're going to stand with someone, how about your spouse or children?

Doesn't Vallone look like a comic book "Bulleteer"?
Look at the way he scrunched his photo to look thinner.

It's the same photo from 4 years ago - and, who knows, maybe it wasn't "new" at that time either.

hey crappy, this was a fun piece, very interesting opinions... you should do this for other races too...

Put a pipe in Duane's mouth and he'd look like a Halloween Popeye.

Graziano looks like a high school kid trying to make believe he doesn't have a silly ponytail.

Shafran looks like he is hiding something. Nickname: Shifty-eyed Shafran

Vallone looks like he should be wearing a sweat stained "Vote for ME" baseball hat from the '09 losing primary. Nickname Chrome Dome Vallone.

Chrissy with the unpronounceable last name. By the pic I don't know which one should be on a leash. Woof!

And that photo DOES look scrunched or stretched a touch, if you prefer!

Chrissy's got her little dog.
Where is Vallone's dwarf Adam Lombardi?

Dogonnit!
Chrissy far from looks like a dog.
Hubba, hubba! I'd like to jump her in the back seat of my Dussenberg! Not bad for a lady in her 50s.


Not only shouldn't the handshake be at chest level, it's the person that is shaking the hand of the candidate and endorsing him/her that is most important.

In this case, the photos speak volumes: Vallone's endorsement by Joe Crowley/Helen Marshall and the County Dems (which is almost impossible to actually make out because the image is tiny and dark) made me want to barf. Austin's fake endorsement by Cuomo is exactly that - fake.

Graziano has the only true endorsement from Avella, and if the handshake is a little imbalanced visually, although it seems fine to me, that would be because he's a very tall man, at least 6-12 inches taller than all of his opponents as well as Avella.

Say what you will about Paul's high school like pony tail he's still the smartest. Oh speaking of high school where did Paul Graziano go to high school? The Bronx High School of Science, where they only select the SMARTEST! Vote for GRAZIANO!

I wouldn't take a palm card from Vallone. Ya never know where that palm's been!

"I wouldn't take a palm card from Vallone. Ya never know where that palm's been!"

Then again, whose hand hasn't Lombardi's thing been in?

RU blind?
Graziano hasn't had a pony tail in decades!

But the rest of the candidates strike me as horses' asses or crooked!

Looks like Graziano won the palm card poll with almost 50% of the vote...now I'm looking forward to him winning in the primary in September!

It took a few days, but I finally realized who Paul Graziano reminds me of: Penn Jillette from Penn & Teller. Maybe Paul will work some of that magic on CD19.

Chrissy did NOT "work" in law enforcement. She headed the 109th Pct Community Council. Huge difference. Stop the sleight of hand, Chrissy.