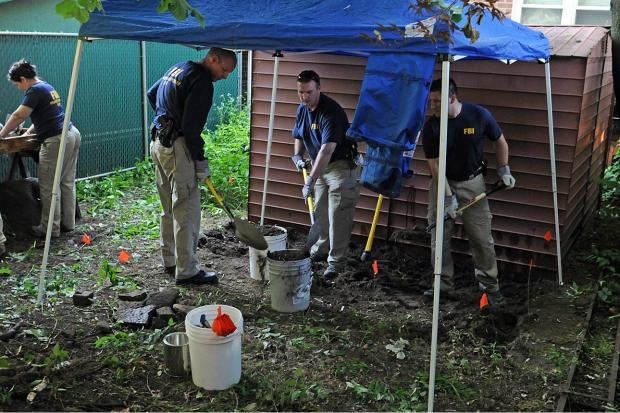 The FBI began digging for a body Monday in the former Queens home of notorious mob power James “Jimmy The Gent” Burke, who was famously portrayed by Robert De Niro in the movie "Goodfellas," sources told DNAinfo New York.

FBI Evidence Collection specialists and agents from the Organized Crime Division descended into the basement of Burke’s family home at 81-48 102 Rd. in South Ozone Park about 8 a.m. armed with jackhammers and sledge hammers.

Sources said the feds recently obtained information from a new cooperating informant linked to the Gambino and Bonanno crime families who told them he believed a hood who disappeared decades ago was buried in Burke’s basement or backyard.

The sources say the dig is not related to the fabled 1978 Lufthansa Heist, where Burke, portrayed as Jimmy Conway by De Niro in "Goodfellas," and his fellow wiseguys pulled off an $8 million robbery at JFK, which at the time was the largest robbery in history and was featured in the film.

Many of the suspects eventually were murdered.

Only the body of Burke's closest friend, Thomas DeSimone, who was played by actor Joe Pesci, has never been found, but sources say they are not looking for his remains at Burke’s home.

Looks like Jimmy the Gent had an illegal conversion in his cellar.
Posted by Queens Crapper at 12:54 AM

Soon they dig up Whitestone, too, bocce boys

Stop being judgmental - doesn't everyone have dead mobsters in their backyard?

they should check out Juniper Valley

That's odd. Two violations issued. Still in violation, yet nothing is owed?

I see at least 4 people involved in this operation. Add in the rest of th crew, drivers etc and it's likely about 10 people are on site.

Since they are Feds they are making (with bennies) about $100/hr each, that comes out to about $1K/hour plus transportation and housing costs.

Do we really care about who is buried there ?

NSA - John has a long mustache.

Did they find me?

I remember that section of Ozone Park in the 70s and 80s.
And with all the so-called social clubs along 101 Ave, the neighborhood was safe and thriving. If anyone caused trouble, the clubs were there to keep order. Look at this neighborhood now....it's unrecognizable!