"As street parking is becoming increasingly difficult in this part of the neighborhood some tenants don't have any regard for their neighbor’s needs, they bring boats, trucks, schools buses and also big RV's to be stored permanently on the streets in front (or not) of their houses taking valuable parking space from their respective neighbors.

Others park cars for years and although is not against the law there should be an ordinance that help remove from the streets vehicles that have been there for more than an specified amount of time, also, not to allow vehicles bigger than a certain size to be stored not only preventing neighbors from parking but preventing the view, sunlight and breeze to reach certain dwelling units besides being eyesores. 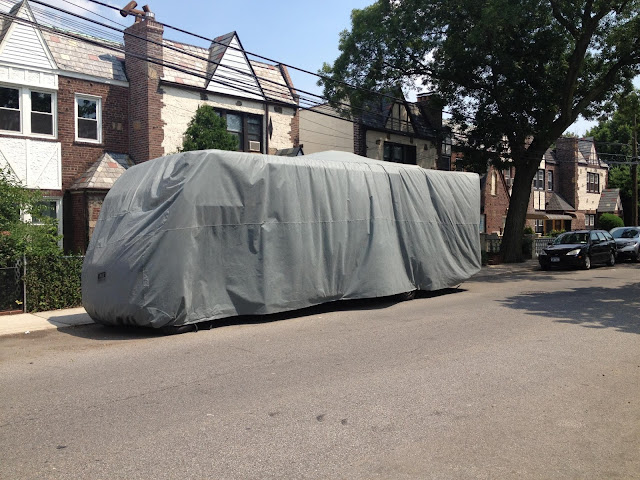 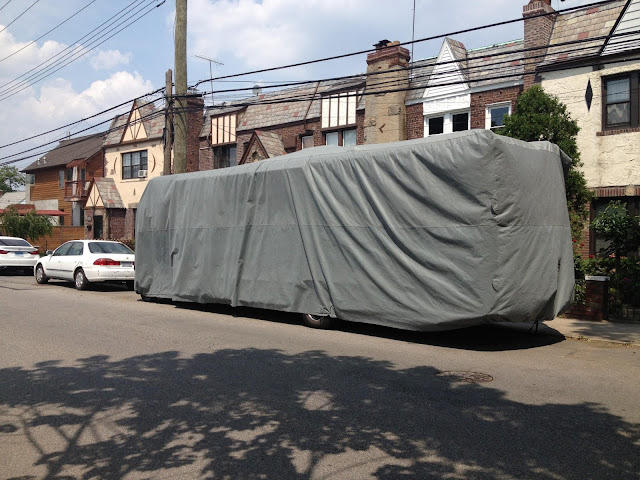 In front of 21-17 147th Street in Whitestone there's what appears to be a huge covered RV permanently parked taking some two or three parking spaces. 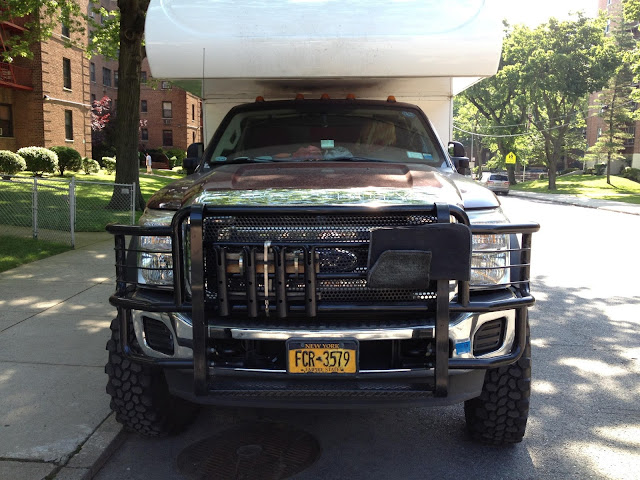 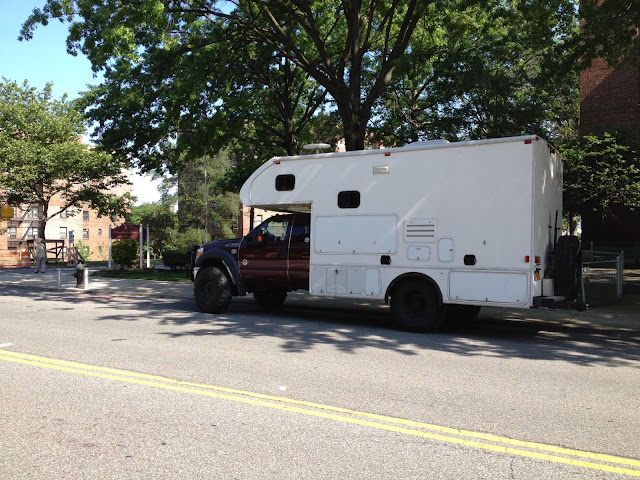 Near the corner of Union Street and 26th Avenue in Flushing in front of the Mitchell Gardens #1 coop building 142-15 26th Avenue there's another RV type of truck color brown with license plates FCR-3579 that has been parked there for months now. It’s near the water hydrant in front of the playground 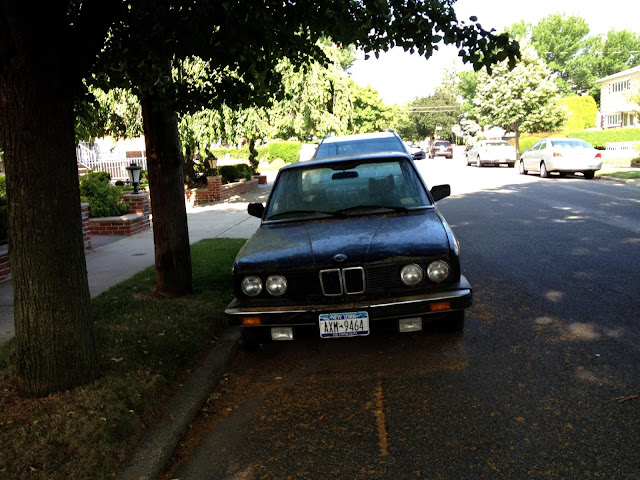 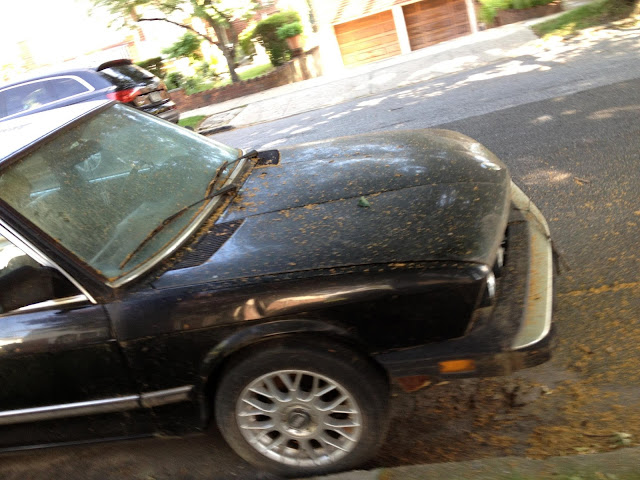 In front of 146-16 25th Rd in Flushing there's a black BMW parked on the street for years, I’ve been walking this block at least once a week for a long time now and this car has always been there in the same position, you can see the marks of time on the car’s body and tires. License plates AXM-9464. 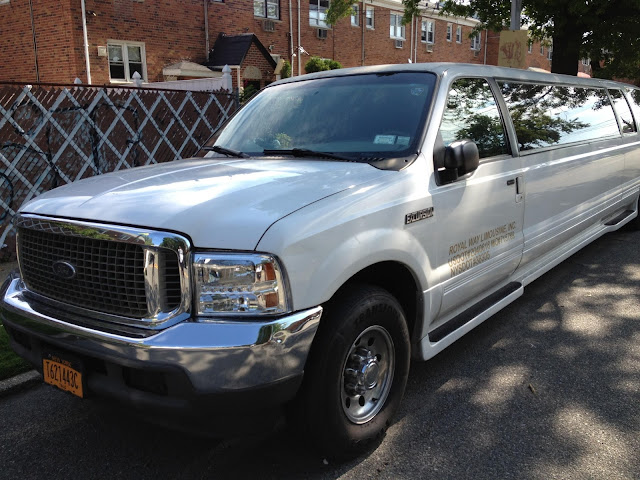 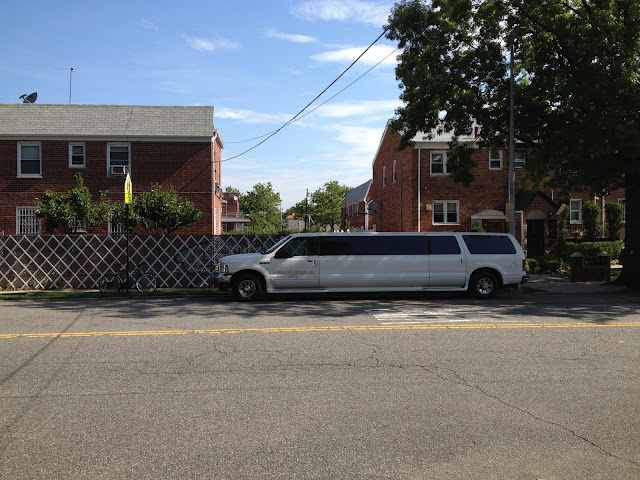 In front of 144-13 26th Avenue in Flushing there’s a very long limousine belonging to Royal Way Limousine Inc with license plates T621443C that barely moves from this place, the owner could park blocking his/her own driveway in order to save someone else some space.

All these vehicles are taking someone else's parking space, most people in these parts need the street parking space because most tenants in the neighborhood rent and don't have the right to use the driveway since landlords store their property in the garage of the house they rent to other people." - anonymous
Posted by Queens Crapper at 12:37 AM

My understanding is that there is a law for this, seven consecutive days in the same spot constitutes "illegal storage of a vehicle on the city streets".

Pretty much useless information because you have to get someone to tow the vehicle and you know that would constitute someone doing their job.

For any of these long-term vehicles, I hope the neighbors are keeping close tabs on the registration and inspection stickers.

However, once ticketed, these vehicles have a way of disappearing pretty quickly on their own.

As far as that covered RV (or any covered vehicle parked on the street), I shocked those things aren't immediately ticketed and towed since obscuring the registration and inspection stickers is illegal.

I had always thought that vehicles could not be in one spot for more than 30 days.

I live on a stretch of Parsons Boulevard where there is no street cleaning. As a result, I often see vehicles with flat tires, peeling paint and expired reggie stickers on them.

I call 311 to report derelict vehicles. I follow up with the 311 website to check the status of my complaints. Living a block from the local precinct also helps in getting the job done.

Overnight parking of commercial vehicles is NOT allowed. Call 311, ask WHEN they will respond, keep the complaint number and put it on your calendar for follow up - if no action, all in a complaint about the complaint, and call in a new complaint at the same time. Repeat as necessary... and copy the precinct's community affairs office.

Everything in the city is driven by the damn 311 system - which often allows complaints from areas that aren't on the "gold coasts" of, say, Billyburg & Manhattan to disappear. Don't let that happen. Keep at it!

so what do we do to fix it?

The New York City Traffic Rules and Regulations comprise Chapter 4 of Title 34 of the Rules of the City of New York.
Section 4-08(m)9 prohibits parking a vehicle in excess of seven days.
(9) Street storage of vehicles prohibited. When parking is not otherwise restricted by posted signs, no person shall park any vehicle in any area, including a residential area, in excess of seven consecutive days.

The car won't get towed if you call it in to 311, but it will eventually receive a summons for violating the 7 day rule.

Previous to this 7 day rule, you could park a vehicle indefinitely without violating any laws. Before that, it was 30 days.

Regarding the driveway gates that block the sidewalk, just pick up a cheap chain and padlock and chain the gate closed some morning.

Yes, agreed!
Amnd, WHAT CAN WE DO ABOUT the SCHOOL BUSES PARKED 24/7, and WASHED (I have photos), in Front of P.S.21 and J.H.S.185 on 149 Street across from Memorial Field? ~ JAFAN TRANSPORTATION & KENLEY'S TRANSPORTATION!! Btw, is DOT really going to summons Parks Dept for Memorial Field's "Fun House" style sidewalk, and if so will they enforce it, or ignore it like most other summonses and SR/Complaints like Sidewalks, Illegal Driveways, etc.??

Regarding Comment #4, Surgey Kadinsky: you have no parking on stretch of Parsons Blvd; ~ Can/How Can we change that? We also jhave a stgretch of 149 Street, Both Sides, in front of MEMORIAL FIELD. I just got the "No Standing" signs @ 26 Ave replaced. I'm going to submit "Missing ~ No Parking Signs" for this, maybe/hopefully today. I was recently informed, by Paul Graziano, that $5.8 million was just spent on the baseball field, and 2 yrs ago; the Tennis Courts. For that much money to be spent and not keep rest of area, sidewalks and streets cleamn and properly $maintained and signed is deploreable. I recently got a call from Sanitation ~ they 'sent a street broom' to sweep 149 street in front of Mem. Fld., in response to an email letter I sent thru 311, and "did best he could" (cars always parked there) and "will continue to monitor it".