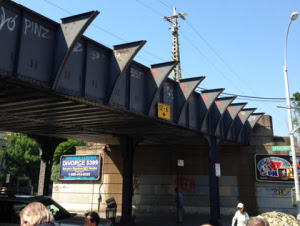 The Long Island Rail Road’s Elmhurst station closed in 1985, when ridership was measured in the dozens, but the railroad thinks there might be a reason to reopen it.

LIRR President Helena Williams said there’s been early enthusiasm for the project, which would cost an estimated $30 million, but they want that yearning down in black and white.

So surveys will arrive in the neighborhood mailboxes in early July. It will be in English, Spanish, and Mandarin.

Williams said adding a new station to the Port Washington Line would not slow service, especially with improvements being made already.

Rep. Joe Crowley joined Meng, saying it could be a boost to quality of life.

Not only that, think of the scads more development we can encourage!
Posted by Queens Crapper at 12:41 AM

If over a thousand people will use it every day,then ok. Otherwise , scratch this dumb idea.

Great time-saver for people making $150,000+ who live/work in Elmhurst and live/work in the Penn Station area but who else would benefit?

Oh, for God's sake. Crowley and the politicos are spending your money and when nobody comes to the party, they will be long out of office. This is pandering at its worst.

The demographics of Elmhurst haven't changed since the 80's. These are not white-collar New York commuters but local business people who either walk to work or are being served by the Queens Blvd line. And Helena Williams is clueless: another stop will deteriorate the quality of her bread-and-butter of her Eastern Queens and Western Nassau commuters. Where do these people get their brains and common sense? Probably at the Dollar Store...where their potential Elmhurst customers shop.

Crowley & Co. is just pandering to get Latino votes.

If you re-build it, they will come.