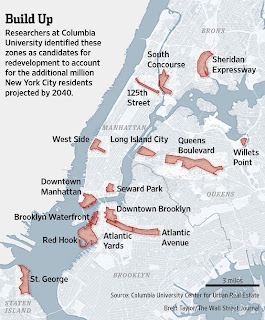 In the coming decades, New York could confront a problem many cities would love to have: too many people and nowhere to put them.

The city is expected to add one million more residents by 2040, but there likely won't be room for hundreds of thousands of them unless a small city of new housing is built, according to a report by a Columbia University think tank.

The most logical location for all this new housing: the city's waterfront neighborhoods, including Long Island City and Willets Point in Queens, Red Hook in Brooklyn and the Financial District, according to the report by the Center for Urban Real Estate at Columbia University.

Whether residents want more apartments in their neighborhoods remains to be seen. In places such as Williamsburg where Bloomberg administration rezonings brought new residents, the result has been subway cars so packed that commuters wait for several trains to pass, lengthy kindergarten wait lists and promised parks that have yet to be delivered. The city has also yet to master the art of making tightly packed blocks of new glass towers feel like neighborhoods, rather than sterile enclaves.

Finding places for new people in the city isn't as simple as putting development in less-dense neighborhoods. More than a quarter of the city's housing is in single-family structures, meaning there's still plenty of room to go up to accommodate more people.

But in many of those areas prices aren't high enough to justify the cost of building new 40-story towers. It's unclear, for example, whether there's enough demand for the 10,000 to 15,000 units the report said could be accommodated along Queens Boulevard, a 12-lane thoroughfare through the heart of the borough.

That much of the development would be along the waterfront raises serious questions after superstorm Sandy, when residents in Lower Manhattan, Long Island City and Red Hook were out of their homes for weeks or months.
Posted by Queens Crapper at 12:10 AM

I think Columbia University should mind its own business! We need a million more people like we need 4 more years of Mayor Mike Doomberg!

why does everyone want to come here? unless your wealthy it is a crappy lifestyle and most that come are poor and uneducated. don't they understand that the more people that live in a small area the quality of life goes down the bowl. go out west, go to upper Midwest, go to Wyoming, north Dakota. plenty of land, clean air, and jobs.

"[Columbia] dominates a six-block stretch in Morningside Heights as well as a number of research and athletic facilities scattered throughout Manhattan, securing Columbia’s rank as the second largest landowner in the city,"

What's that saying again about having a splinter or beam in the eye?

Put them in Corona Queens, a hip and diverse up and coming area.

But of course, mon ami...they're in direct competition with New York University as prominent land grabbers.

University education is a worldwide business.
Learning is optional. Tuition enriches these educational institutions. Then they take your $$$$ and invest it in real estate.

I just got an alumni association appeal letter from my alma mater NYU.

I think I'll reply by saying, "I'll send you $1,000 if you tell me what percentage will be paid me for my investment in your real estate acquisitions"?

Columbia and NYU trawls for students in every corner of the globe. don't tell me that education is their prime goal. It's real estate gobbling!

You may say this sarcastically, but there was once a time not too long ago that you would NEVER admit you lived in Williamsburg, and Prospect Park was a dangerous drug zone.

why does everyone want to come here?

NY's TWEEDER PROGRAMS ARE LEGENDARY - THE WHOLE WORLD KNOWS THAT.

unless your wealthy it is a crappy lifestyle and most that come are poor and uneducated.

BETTER THAN THE SHITHOLE THEY ARE FROM - THINK NIGERIA, SYRIA, RUSSIA

don't they understand that the more people that live in a small area the quality of life goes down the bowl.

SEE LAST POINT. AMERICANS HAVE EXPORTED THEIR WEALTH AND LIVING STANDARDS ABROAD SO THE GAP IS CLOSING.

Columbia wants to build a path linking its two campuses, or else they threaten to move to Jersey

The age of easy oil is over. All that shale oil and deep water drilling is expensive. They require $70-$90 a barrel to break even. Consequently, all those suburban communities that are difficult to get around in without a car (thus enforcing driving, and therefor oil consumption) are less attractive to Echo Boomers.

NYC attracts people and money from around US and the planet the way London and LA does, and if the tech push succeeds, the way Boston and Silicon Valley does. You get both low end and high end. The metro area is chocked full of good to great colleges that attract bright kids. There is a valid complaint of cost of living and business. Those who come and want to stay, or are already here and plan to stay need someplace to live. If there aren't policy solutions for this, you get what you have today. Overdevelopment- in other words half baked development without coherence regarding schools, parks, transit, sewers, water, electricity, etc.

Guess what that means for NYC. Thats right, those couples who used to decamp for the suburbs are rethinking that. We need to deal with that with coherent manner.

Their solution sounded like a lot more overdevelopment, just as we have today. How about coming up with an infrastructure plan like FDR did during the Depression that provided jobs for the unemployed as well as providing the upgrades the country needed?