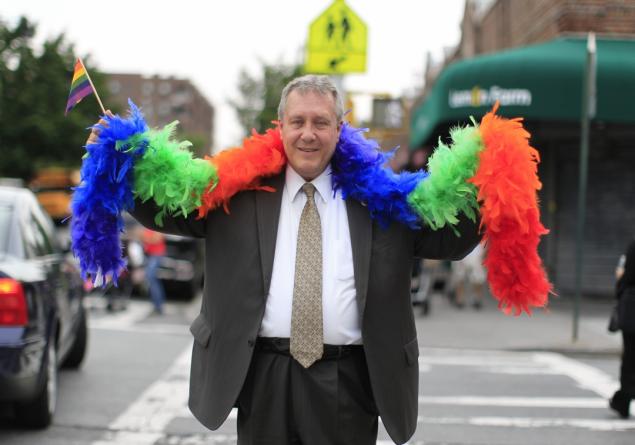 “Thank God for Shelly Silver,” Mr. Dromm said to his group, the News Visions Democratic Club in Jackson Heights, when the discussion shifted to Albany politics. “A lot of conservative stuff that might have happened didn’t happen. I don’t know what his prospects are for the Assembly, but we’ll see.”

Mr. Silver has faced a barrage of criticism for his handling of sexual harassment allegations against ex-Assemblyman Vito Lopez. While Mr. Silver has since apologized for quietly settling several cases against Mr. Lopez with $100,000 in public money instead of flagging them for investigation, many editorial boards and two Democratic Assembly members have called for him to step down as reports continue to swirl that Mr. Silver, who has held his post since 1994, may be facing growing backlash from his typically loyal members.

Mr. Dromm, however, reiterated to Politicker that he believes Mr. Silver’s presence is crucial in Albany.

“Shelly has held the line on a lot of progressive issues and I’m appreciative of that,” he explained. “I don’t want to see a lot of things that have been passed or proposed by the Republican Senate be put into law.”

Well, that's certainly interesting. More than half of NYers want Silver gone.
Posted by Queens Crapper at 12:21 AM

This guy is an asswipe.

Who cares what NY want.

When they mechanically reelect you it really doesn't matter.

That aging Queens queen, Danny Dromm will support any measure or anyone who flies in the face of convention.

That's part of the lavender "progressive" mantra or agenda.

Sporting a theatrical rainbow colored boa around his neck...Dromm is looking more like a clown than a lawmaker these days.

Danny boy...it's time to grow up already!
You haven't been a teenager for years.

Notice how Queens pols have that smarmy look?

What normal teenager does that?

No matter how queer the plumage somewhere there is a flock.

A lot of conservative stuff that might have happened didn’t happen.

Between Dromm and Van Bramer,
the Queens political scene is beginning to be run by a bunch of queens.

Don't these two butt buddies care about anything besides gay issues?

The last time I looked around, there are plenty of straight voters that are being under represented in their districts.

Just look at this idiot. A boxy suit if I ever saw one with a rainbow boa. What planet is this?