Someone is suing to get Fat Boy back 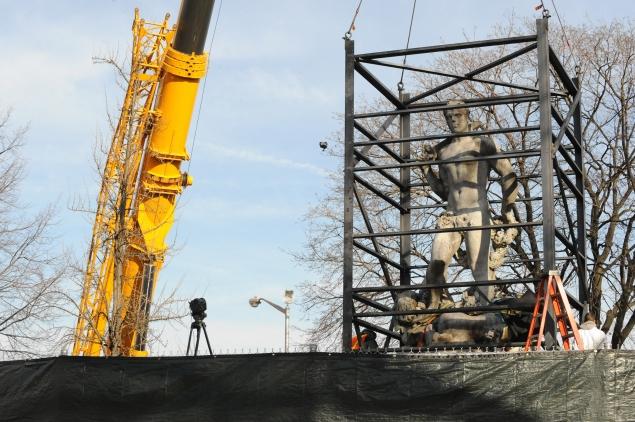 A Queens-based filmmaker has sued the city over its hastily-enacted plan to pluck a deteriorating statue off Queens Blvd. and move it to Green-Wood Cemetery in Brooklyn.

Robert LoScalzo claims the city has refused to turn over emails and other communications involving the removal of the Triumph of Civic Virtue from its longtime perch outside Queens Borough Hall.

“There are still too many unanswered questions,” said Jon Torodash, a Kew Gardens resident who led a campaign to keep the statue in Queens and is working with LoScalzo on the legal action. “How was a heavy construction project like this done in quick secrecy?”

Plans to move the statue were unveiled during a little-known Design Commission meeting in November, when most civic leaders and lawmakers were focused on recovery efforts after Superstorm Sandy.

One month later, the statue was moved to Green-Wood.

Cemetery officials said all of the conservation work on the statue has been completed and it is awaiting a new granite base.

Great, now you can bring it back to where it belongs.
Posted by Queens Crapper at 12:02 AM

The NYS Committee on Open Government has provided a written advisory opinion in this case that has been submitted to the court, supporting LoScalzo's claim that the records sought by his FOIL Request are NOT exempt from disclosure, and must be produced by the city.

"Great, now you can bring it back to where it belongs."

I'd love to plunk it down at City Hall with the ass facing the front of the building. Since it was banished to Queens by LaGuardia, it belongs back on Queens Blvd.

What is to take its place on Queens Blvd?
We are now forced to look at an ugly graffiti- riddled plywood fence.
Helen Marshall: Show your face!

Just to head off the naysayers who'll inevitably come around and say things to the effect of "why keep pursuing this? It's been moved."

LoScalzo is within his rights, and the public deserves to know the truth. The city has gone to considerable lengths to keep the whole episode under wraps, and it's important to follow through on these matters regardless of the outcome, so that the powers that be think twice before trying something like this again.

There are still unanswered questions:

• Who in city government came up with the idea of removing the statue, and with whom did they discuss it?
• Did someone at Green-Wood reach out to a member of city government, and to whom specifically?
• When and why was this idea of removing the statue hatched after it had been neglected for so long while at Borough Hall?
• How did the contractors who performed the armature construction and conservation know the agency was seeking relocation, and what were they told?
• Why waste $50,000 on the armature when the conservator could have worked on it in Queens?
• How did Green-Wood know to watch the Design Commission for the three days notice of the public hearing in order to have a presentation prepared?