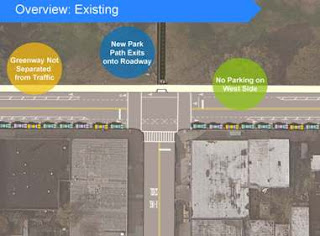 Vernon Boulevard’s bike lanes are set to get a makeover this summer to provide extra safety for riders and more space for drivers.

According to a plan the Department of Transportation (DOT) presented to Community Board 2 on June 6, the two one-way bike paths on each side of Vernon Boulevard would become a two-way protected lane. The lane would have a five-foot buffer running alongside the west side of the street. The lanes would also be painted green to provide easier visibility. 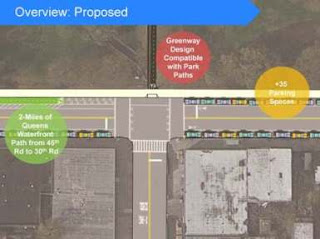 The existing bike lanes were set up as part of the Queens East River Greenway in 2008, which connects the waterfront from Hallet’s Cove in Astoria to 45th Road in Hunters Point.

After hearing community concerns over the lack of parking, DOT also plans to create a protected bike path through Rainey Park in Astoria. That would free up 35 parking spaces between 34th Avenue and 33rd Road.

PARK Smart aims to increase the number of available parking spaces by encouraging motorists to park only as long as necessary. Parking rates in certain parts of the neighborhood will increase as motorists are parked longer. In other areas, a value rate will allow longer parking at the current rate.

The Progressive Rate encourages short stays, while providing more time for those who need it, on 37th Avenue, 74th Street, 82nd Street, and Broadway.

The Value Rate provides a low-cost, two-hour option for parking in lower demand areas. The Value Rate will be in effect on Roosevelt Avenue (from Broadway to 82nd Street) and 37th Road (74th to 75th Streets).

Meters on 74th Street will be extended to turn off at 10 p.m.

The meters on 74th Street and on Roosevelt Avenue will be converted from a one-hour limit to a two-hour limit.

While Community Board 10 members said at their meeting last week they are pleased the city Department of Transportation is looking into additional parking for the congested 156th Avenue between 77th and 78th streets in Lindenwood, they voted to have DOT officials to take a closer look at their proposal.

Residents who spoke at last Thursday’s meeting said they supported the city’s plan to make parking less of a headache in the area, but asked that the DOT implement parallel parking spots along the north side and angled spots on the south of 156th Avenue. Al Silvestri, a DOT representative who attended the meeting, said the city has proposed doing the opposite – placing parallel parking along the south side and angled spots along the north.

The city first began looking into creating additional spots – meant to alleviate severe parking problems that residents said they have dealt with for far too long – following a request from the office of Councilman Eric Ulrich (R-Ozone Park).

CB 10 members pointed out that the angled parking proposed by the city would be on the same side as residences’ driveways, which they argued could create a logistical nightmare for drivers trying to exit their homes.

“That side of the street has cars that are pulling out,” said CB 10 member Joann Ariola. “You really need to take a look at flipping it and putting angled parking on the other side. That would be much safer.”

Silvestri said his department would review board members’ suggestions.

A bill also passed this Wednesday that should help with parking meters:

Did you catch it?

Anchor says at about 9-10 seconds at the beginning: "What does it mean for you and I?

The more I see stuff like this where money is lavished on one segment of society - while it is refused to others - the more I see Queens as akin to some third world country where one ethnic group or religious group is lavished gifts - while another that is out of favor - is treated like invisible second class citizens.

How much longer are we going to tolerate watching our hard earned taxes being given to hipsters and developers for frivolous things like this - while the needs of communities full of long suffering citizens are neglected?

Be nice if the Occupy people could help but they are a big disappointment. Even they have Peter Vallone smiling from their website. Its seems as the rise of the Right in Greece is more important than the grinding down of the local proles in their own community. I guess in their eyes you have to be the right ethnic group to get attention or be worthy of respect.

All is meaningless once the community is cut off with a row of 40 story "job creating public access projects" the length of Vernon.

The traffic will be permanently congested.

Live and work on Vernon. I see, MAYBE, 4 cyclists PER DAY.

I guess they know the 'right people" that we don't.