Illegal stickers have ties to mafia and fake charity 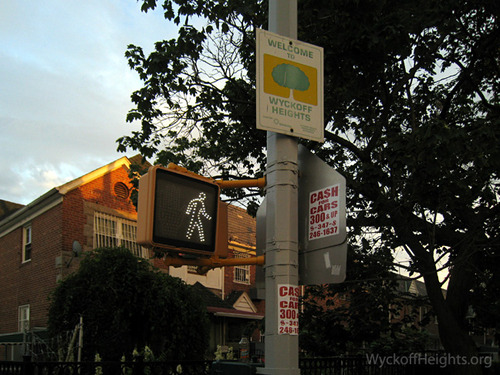 Residents of Ridgewood and Bushwick likely have noticed the multitude of new “Cash for Cars" stickers that have appeared on signs and telephone poles throughout the neighborhood in recent weeks. These ads promise “300 & up" but provide no information about the entity behind them, just a phone number - 347-246-1637.

Seeking more information I recently called that number. A woman answered - "Cash for cars!" - and offered $200 and a tax receipt for $500 in exchange for my (fictitious) 20-year-old sedan. Asked if the tax receipt meant they were a non-profit, she replied that they worked with several non-profit organizations and that the money raised went “to the troops and the kids." Pressed for more information she said the tax receipt would be from the “Foundation of Dreams."

A search for the Cash for Cars telephone number turns up dozens of similar ads online, many in local newspapers’ classifieds. Most are as vague as the recent stickers but a few refer to a “Troops Relief Fund".

IRS filings from 2009 to 2012 show revenue of almost $150,000, with most of that spent on salaries, rent, utilities, advertising, and other expenses. Just $2,900 (or 2%) was spent on “donations" by the organization (the nature of these donations is not explained).

Further research finds that the organization’s secretary - an Ozone Park resident - is also secretary for Bless the Kids Fund Inc, a Hewlett NY not-for-profit which in 2009 reported revenue of $549,491 from “car sales" with 7% of that going to charity.

Mark Lomonaco turns out to be a former associate of Carmine Agnello (one-time Gambino Family soldier and John Gotti son-in-law). In 2000 Agnello, Lomonaco and five others were arrested and charged as the result of an investigation into organized crime in the scrap metal industry, during which an undercover police-run scrap yard in Queens was firebombed.

A 2001 press release by the Department of Justice stated that Lomonaco and the other defendants plead guilty to racketeering, extortion, arson, income tax fraud, and obliteration of vehicle identification numbers.

This is the best blog post I have read in a long time. GO GET 'EM!
Posted by Queens Crapper at 12:55 AM

Reminds me of the many calls I used to get around 10-15 years ago to "support the police" foundations. I visited one of these boiler rooms on Broadway in Astoria to see the phone banks. This scam eventually went by the wayside.

I'd always suspected there were connections like this for these signs.

They appeared so suddenly and in such great numbers in my neighborhood a few years ago that whatever entity was responsible had to be extremely efficient.

Plus, a true nonprofit organization would never risk losing its 501c3 status by participating in an illegal activity like these sign postings and if one did this would be easy to track. Nope, these groups sound pretty shady - definitely not on the up and up.

Thanks for the information!! I hope major media will pick up this story.

WELL DONE! Investigative reporting is NOT a lost art! One hopes and prays something positive (not a firebombing, in other words) comes out of this.

I used to get the same calls that George got. They stopped when I asked them to send me written information on their "Foundation" that explained where the money that they were asking me to donate went.

Was in a doctor's office the other day with the waiting room TV on GMA. You're not kidding..What annoying morning crap!!

Wow,terrific, tenacious research. If you can do it, why can't the state atty general's office, which supposedly monitors all these so-called charities? How many of these are out there?