Some bikers backing Comrie over Vallone 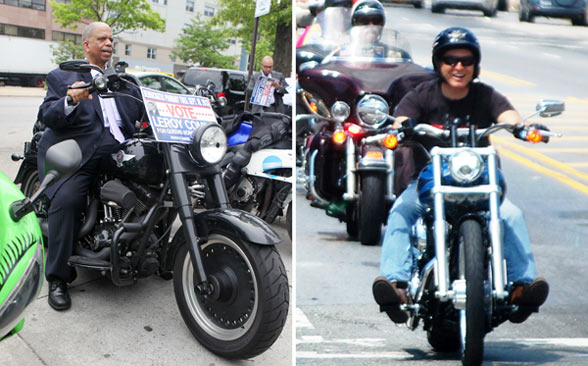 ...Comrie was also perched atop a motorcycle — albeit a parked one — outside Borough Hall for a campaign rally.

The lawmaker, while not a motorcyclist himself, earned the respect of other bikers after opposing a 2008 bill proposed by Vallone that would have regulated exhaust noise and allowed police to confiscate bikes after a certain number of infractions.

“Comrie, he was trying to help us fight it,” said Mark Brown, president of the Power Movez Motorcycle Club, where he is known by his nickname “Lunatic.”

“He would be a good borough president because he supports people,” Brown said, going beyond his support for Comrie by questioning Vallone’s riding credentials.

“I heard he just started,” Brown said. “There’s not much of a biker there if he tried to make a law against us and then learned how to ride.”

Vallone’s campaign said the lawmaker rode when he was younger, took a break and returned to the road about five years ago.

In the end, the councilman scrapped the proposed legislation anyway because he could not find a fair way to regulate the exhaust noise, which he said is excessive in some cases.

This post could also double as a caption contest, so be my guest.
Posted by Queens Crapper at 12:44 AM

“He would be a good borough president because he supports people,”

I don't see how encouraging overgrown children to make even more noise with their mid-life crisis toys is supporting anyone except for the makers of ear plugs.

Really, what is it with these alleged adults?

Do they need all that vibration when riding their metal horsies because that's the only action they're ever gonna see down there?

Hey boys, in this day and age there have to be plenty of other cheaper alternatives - most of which won't disturb the neighbors!

They must have reinforced that bike before Leroy mounted it...or it would have been flattened like a pancake under his weight.

Born Wyld says.....
When it comes to WHY people ride motorcycles I will only say this: If I have to explain it to you, you won't understand. Apparently if you were an avid rider that keeps in tune with motorcycle legislation in NY you would understand that there is a complexity with making various motorcycles compliant. It's not about grown kids with big toys. It's about the rights of citizens who wish to operate a specific type of motor vehicle and the legislation proposed was unfair and would make it difficult to make various older vehicles compliant, and that's just for starters. The proposed laws would give police "carte blanche" in many instances to ticket or confiscate your ride. If you are a responsible rider and don't rev your engine to deliberately make noise, no one should be complaining. Motorcycle groups are some of the most avid supporters of various charities and they go to great lengths to assist many in need. Using our love of riding to fundraise AND THEN SOME! Why don't you jump into your little tuna can sized "smart car" or Prius hybrid and educate us some more about how we should all conform to your standard of vehicle choice and give up some more of our rights. Could it possibly be that there is more to riding a motorcycle than just mere transportation? Hmmm... As for the pols on bikes, it's utterly laughable to hear that some of these guys think that $30K spent to own a bike and riding less than 30 miles in a year qualifies them as a "biker".

Motorcycles are an annoyance. I do not care how much their owners give or whatever. If they want to give they can give without plaguing a community with noise as an exchange.

The create big noise with for guys with small ^%$$&.

Be perfectly happy if they are banned. They serve no purpose except to satisfy a cultural segment of losers.

Get a life guys.

"If you are a responsible rider and don't rev your engine to deliberately make noise, no one should be complaining"

That's the problem. So many of your comrades are not responsible - not with the noise the generate, nor the maneuvers they make on the roads. Maybe we commonfolk would be a little more understanding if you and the rest of your friends cleaned house and made the reckless behavior more unacceptable in your own sub-culture. With a name like "born wyld," I'm guessing you won't.

Thanks to all for filling my RDA on sanctimony. Not you, Born Wyld.

i can see why people ride motorcycles. open road, wind in face, fine. but why do some riders have to (and i mean have to) make their bikes so friggin looooud! thats the only thing i dont get. nobdy wants to hear it and these guys gotta know that so whats the point?

Motorcycles should be banned in the city. All they do is make an insane amount of noise and they drive like assholes cutting in and out of traffic almost causing constant accidents.

You don't have to grow up if you are the son of political mafioso Don Pietro "senior" Vallone.

You can act like an adolescent...riding on daddy's coat tails for years.

Only YOU VOTERS can topple this self serving dynasty.

Put up or shut up!