No one can seem to shut illegal site down 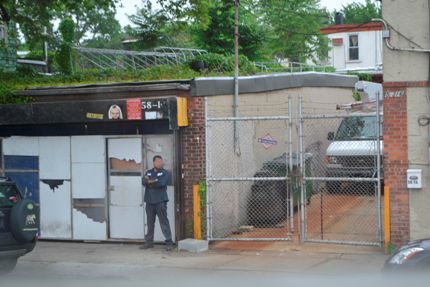 Neighbors on one Glendale block say the nearby garage is a chronic nuisance.

“These people are lawless all day, every day,” said one woman who wished to remain anonymous.

The garage, nestled on a quiet block in Glendale, sees dozens of cars every day. Neighbors complain the owners’ cars stay parked on the sidewalks and down the street for days, inconveniencing residents.

However, owners Elsie Serrano and Oscar Ortega claimed they are running a completely legal operation.

“I have receipts for everything I have done here,” Serrano said.

The shop’s license to sell cars is up to date, and both Serrano and Ortega are licensed to run their business.

However, neighbors allege they do not sell vehicles, but illegally repair them.

Ortega said his store brings cars to a nearby Getty station for service and if the station is too busy, he will do an oil change or fix brakes himself. He added that the store also legally washes cars. However, neighbors said they have seen workers do larger-scale repairs.

“They’re fixing collision and mechanical problems,” said Danny, a resident who withheld his last name. “You can smell chemicals along our block. These are people that have no morals, no respect.”

The owners frequently have their large family visit the site, and several neighbors said they blast music and intimidate residents at all hours of the day.

The 104th Precinct has paid many visits to the site, handing out numerous tickets and summonses. Neighbors said police officers have told workers to shut down the operation, though the 104th did not return calls for comment.

The Fire Department has allegedly shut the site down four times, but the shop continues to reopen. The woman said she has not seen any police or fire presence at the site since April.
Posted by Queens Crapper at 12:13 AM

This may in fact be a real problem but people need to be aware of what is really going on here.

The story here is not the illegal garage itself but that Craig Caruana is using this as a means to obtain local press.

Mr. Caruana and two of the complaining neighbors showed up at a recent local community meeting. The two complainers, apparently a married couple, were EXTREMELY vocal - to the point of almost alienating everyone in attendance.

It even got under the skin of some people there who were honestly trying to help them by offering some avenues of assistance to the couple.

I, like everyone else there, sympathized with the couple. But, they kept going on and on and on with their complaints - repeating them over and over and over - trading back and forth - first the wife, then the husband, then the wife again, then the husband again and so on. They even said many of the same sentences more than three times (yes, I counted - I couldn't help but notice the repetitiveness).

After they had completed their performance, wouldn't you know it, Mr. Caruana had dealt with a situation EXACTLY LIKE THAT in Middle Village and he proceeded to tell his story of how he helped resolve that situation.

Oh, and by the way, this couple and the offending garage AREN'T EVEN LOCATED IN THE COMMUNITY THAT THIS MEETING SERVES!

Now, to be honest, Mr. Caruana, at first impression, doesn't seem like a bad guy and he appeared sincere. And c'mon, let's face it, he needs to get his name in the press to get elected.

But it's important for everyone to question the validity of little shows like this one. That's the nature of NYC politics. Be skeptical if you see stuff like this. Don't take it at face value.

Now with that said, I hope that the couple near that illegal repair shop are able to get it shut down and that they get some peace in their neighborhood.

The first comment reveals exactly why Queens is in the condition it has been in for so long. The commenter actually admits there is a problem that needs resolution but made a totally unnecessary and useless analysis of a political challenger trying to address the situation and the people who complained in the first place while avoiding any criticism of the incumbent who allowed the situation to fester under her watch. Enjoy 4 more years of misery. You seem to be asking for it.

What has Elizabeth Crowley done to resolve the situation? Nothing. And you are criticizing her opponent who is trying to help without the power of office? This is why Glendale and surrounding areas get the shit end of the stick all the time. Someone actually tries to help and they are accused of politicizing the issue. Even civic leaders with no intention of running for anything have been attacked for allegedly harboring thoughts of political grandeur. So instead, we get the same tired, ineffective shit re-elected and get nowhere.

Is the garage legal or not? It seems not. And your council member has done nothing about it. THAT is what should outrage you. Not that someone is running against her and using the issue to make a point that the situation can be resolved with the right leadership.

The whole point is this garage is illegal and the city is doing very little in regards to this, much how they handle many issues in Queens. THAT IS THE WHOLE POINT, none of the other bullshit that people are making comments about. Stick to the damn issue at hand. Christ either you want the problem resolved or not. That first comment is totally irrelevant.


An interesting point is the issue of trying to help someone that has a real problem, but ends up being their own worst enemy.

An yes, the system instinctively reacts to any threat including initiative and unscripted civic participation.

What a well-written, bloviated, out of context comment. If you really feel that way, then just stop complaining and vote for Crowley.

Unbelievable the amount of anxiety some of the "better the devil you know" folk work up... Just remember to keep your yap shut when your community hasn't inched in the direction of improvement over the next 4 years.

this is a combination social club/garage. I know. used to live across the street from a horrible crew who blasted music from their garage. make more complaints to the CITY. and find out who owns the garage. you can make noise complaints anonymously and online
www.nyc.gov/311

What is their address?

This thread, like many others on this blog, are completely useless without offering up the name of the offensive business. I don;t know if this is close to me (I live in Maspeth) but I have NO PROBLEM straightening out assholes in a legal manner without whining about it online and at community meetings. Post the info so I can go have a word with them, and I PROMISE YOU you will see results. There is only one way to deal with asshole bully neighbors, and being timid is NOT the solution.

"There is only one way to deal with asshole bully neighbors"

Google street view is your friend.

part of the address is in the picture.

The garage is located in a residential zone doing commercial work. Banging, spray painting and heavy collision body work! Big problem is such a quiet community.
The owner of the building is Ernest , he has many properties. He is allowing some tenants to do what ever they can on his property to make a buck. Even if it compromising the community .