Woodside Avenue house is a mess 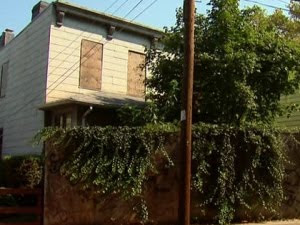 How would you like to have a neighbor who not only abandons his house, but leaves it for squatters and rats to plague the neighborhood?

Mary Kearney, 67, said she is fed up with the conditions of the house next door to her in Woodside, Queens.

Kearney lives on Woodside Avenue next door to a home that was abandoned several years ago. It has since developed into an overgrown yard filled with debris, mosquitoes and rats.

“We had seen rodents in the yard, but we’ve seen mice in our yard,” Kearney said.

Neighbors on the other side are equally concerned about squatters.

The current owner, who lives in Flushing, was not at home when CBS 2′s Slattery tried to reach him. Three years ago, he boarded up the Woodside house and since then, it’s been cited by the city as an unsafe building and structure.

It's like that because there has been a stop work order on the property since 2008.
Posted by Queens Crapper at 12:13 AM

what? no crack heads hos taking shelter working out of that place?

Doubt it, most the Craigslist and flushing HOs in Queens newspapers make house calls. They even have their own private drivers.
Is become a HUGE organized industry like in Bangkok.

Back to the building:
I'm sure the owner as made holes in the roof to rot everything so the city lets him tear it down and clear the property. (to bring the equipment in to do the job)
A cheap prefab 6 apt with "extra basement rooms" will then be slapped up and the foundation of that woman house will be destroyed in the process.

Holes in the roof? That's not necessary as the house can be a "knock-down" and rebuild with multiple units "as of right".

The mystery is that there's no economic advantage to having a house like this unoccupied and therefore deteriorating unless there's a virtual certainty that the zoning will be changed favoring an even greater occupancy on the lot. And that's not the case here.

The agencies should come in with a heavier hand, and if the guy doesn’t want the property, then he should sell the property,” said City Councilman Jimmy Van Bramer

HEY JIMMY, THE TRUST FUND BABIES LOOSE SLEEP CAUSE THEY ARE STUPID ENOUGH TO MOVE NEXT TO A RAILYARD IN BUILDINGS BUILT BY YOUR CAMPAIGN DONORS.

YOU GO NUTS AND ACT STUPID READY TO PISS MONEY AWAY TO HELP THEM.

WHAT DO YOU DO WHEN THE ARCHIE AND EDITHS YOU GREW UP WITH HAVE A PROBLEM? WHY YOU BLAME THE CITY........

AH JIMMY, JUST CAUSE YOU PLAY ON THEIR NAIVETE DON'T THINK EVERYONE ELSE IS AS STUPID -

YOU are 'THE CITY' CAUSING THEM PROBLEMS - SO WHY DON'T WE PASS LEGISLATION STOPPING THIS?

He's "gung ho" only when it comes to his pet causes...
and we all damn well know what they are.