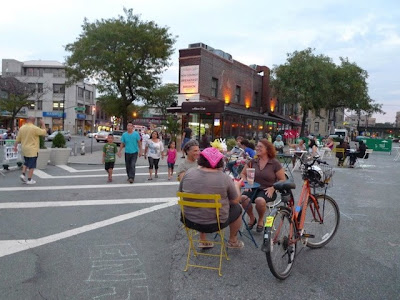 After months of heated discussions, a controversial plan to build a pedestrian plaza at a dangerous intersection was rejected by the local community board Tuesday night, forcing the Department of Transportation to go ahead with a plan to build a curb extension costing more than five times as much.

The plaza proposal had many supporters but it also drew fierce opposition from local business owners, who said the space would affect their businesses by generating even more traffic congestion in the area while eliminating badly needed parking spaces.

According to the DOT data, Astoria is one of 10 neighborhoods in the city that has the least amount of open space.

The need to improve the safety at the intersection was matched with the New York City Plaza Program started by the DOT in 2008. The initiative aims to ensure that all New Yorkers live within a 10-minute walk of open space.

Do you folks recognize the complete load of bullshit that the Bloomberg administration is attempting to foist upon you?

In 2007, when PLANYC 2030 was unveiled, the mayor's clearly stated goal was to have everyone live within a 10-minute walk of a PUBLIC PARK OR PLAYGROUND by 2030. Someone soon realized that would be impossible and extremely expensive, and now they have DOT throwing planters in the middle of streets and calling them "open space" and they think you'll fall for it.

You were promised PARKS AND PLAYGROUNDS, not chairs on the sidewalk!
Posted by Queens Crapper at 12:29 AM

A bit of flimflam,razzle dazzle bait and switch by the Bloomberg administration? Who knew? Who'd a thunk it?Again, like the books, it's all cooked, and thre profits are flowing offshore to Ugland House, Bermuda and other tax havens, while dribbles of "philanthropy" trikle back in for those who can burnish the midget's rep.Can't wait til this exerable piece of crap boards the chopper with Bonnie + Clyde for his final ride out of the city he's led the destruction of.

Slightly off-topic: living within 10 minutes of a playground is irrelevant to adults without children, who are not allowed in playgrounds! Another instance of flim-flammery.

I get that you'd prefer a "real" park/playground, whatever that means, but turning a street into useful open space seems just as good, much more affordable, sometimes more interesting. Streets are the most ubiquitous publicly-owned space, it makes sense to direct more of them toward creative recreational/leisure and altnerative transportation uses rather than leaving it all as a few more square feet of traffic/parking. You wouldn't want one of these plazas nearby? There's a real lack of places to sit down (at a table, even!) and have a snack or drink, and these flexible tables/chairs allow for families or groups of friends to configure as-needed. Manhattan already has many spots like this both in traditional parks (Bryant Park being the originator, I think, of this type of flexible outdoor seating) and urban plazas (I work near Times Square, and it's a real boon to have somewhere outdoors to eat lunch).

Walk 3 short blocks west and you have Athens Square.

Just look at all the schoolyard ones the Bloombergians did, and most of those proposed didn't even get started much less done. Slip-shod never gonna last construction that will be hazardous wrecks in a couple of years. The plaza film flam is another crock of BS by the Bloombergians.

Most of the playgrounds in the city have benches for sitting, and I've never seen a prohibition for adults without children. Admittedly, as a woman, I may attract less attention than a childless man.

@ Anon 5: this is a Parks regulation. I am female - and the parent of a 21 year old with a developmental disability who LOVES to ride the swings...

The pedestrain plazas I've seen are terrible. Putting up a few chairs and a couple of tables does not a park make. The one in Jackson Heights is especially an eyesore. Could use some greenery.

The big question is will the nascent Astoria hipster class use this as a springboard of change, or glumly fall into place so they can tend their little plots at Two Coves and paddle about their little bike lanes.