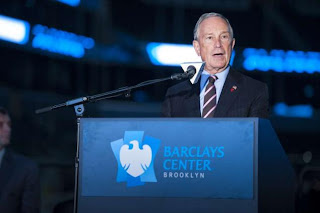 Times are tough — but hang in there.

That was Mayor Bloomberg’s message Friday as he railed at the “bums” in Washington who don’t know how to fix the economy, and faced off criticism that his administration hasn’t done enough to help the poor.

“You should not be that depressed, we grow out of these things, we have been through these cycles many, many times before,” Bloomberg said. On his weekly radio show, Hizzoner noted that not only the economy — but also the politics will renew.

“People will get frustrated and they will say this new wave of people who came in, they’re wrong, and you’ll throw the bums out and bring in a new group who are great and wonderful until they become the bums, and they get thrown out.”

Despite painting a gloomy picture of the nation’s elected officials who “don’t know how business works,” the mayor then sought to reassure New Yorkers it was not all bad. When it came to evaluating his own success at tackling the city’s economy and poverty levels, Bloomberg’s outlook was rather more optimistic despite new figures showing the number of city residents living below the federal poverty line rose to 4.5%, or nearly 1.7 million people, in 2011.

“The nice thing about New York is we don’t walk away from the poor,” he said.
Posted by Queens Crapper at 12:04 AM

That last paragraph contains the usual error anytime a newspaper tries to do math.

The only way 1.7 million people could be 4.5% of the city's population is if NYC had 38 million residents.

They probably meant it rose 4.5%, which is still a scathing indictment of Mayor McChee$e.

The poor...who are invisible to this aloof demagogue... are to left to their own devices.

Hang in there folks...his term will be over soon...
or else hang the son of a bitch!

“The nice thing about New York is we don’t walk away from the poor,” he said.

No, you just dump them in queens where they share divided up apartments with your 'domestic help'

We don't walk away from the poor, rather, we walk right upto them, stop them and frisk them.When it comes tothings they actually need and can use well, we make them jump through lots of hoops.hoping that, in the words of Willard, they will "self-deport".Witness Bushwick where the relatively recent poor arrivals have become "desaparacidos",thereby making room for the overflow from Willy B,the trust fund hipsters. I get the feeling though, that the "L Train effect" might be coming off the rails a bit. No specifics why, just a gut feeling.

Helped the poor? He's turned a good number of middle class people into the poor by raising our property taxes!

do not forget that the City Council's 49 socialists, voted into office by local idiots, voted for the 20.8 % increase in property taxes since 2002.

so who will be elected the next time ? the same socialists,(D.I.N.O.).

And the Repubcons are meeting with Malcolm Swith, Gramps.

I have my "happy days" calendar hanging on my fridge.

On it I gleefully mark off each day left
of Emperor Bloomberg's usurped 3rd term.

Anyone interested in throwing a "good bye" party
on the day that Mike finally leaves city hall?

Please, let's all watch out that the city council
doesn't decide to grant our "little king" a 4th term
at the very last moment.

The thing is that he believes this is true! We think it's a load of crap, but in Bloombergland, it's true!