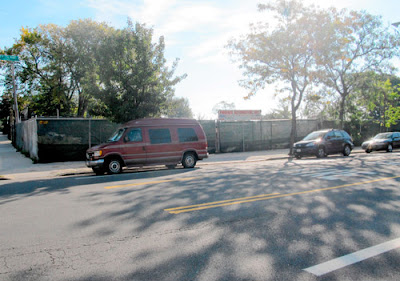 Community leaders on City Island are weighing legal action against a developer who plans a 190-unit assisted living and senior housing facility in the quiet, island community.

The project has been turned down by Community Board 10 and the Department of City Planning, but the developer plans to push an appeal with the city’s Board of Standards and Appeals.

The proposed facility would rise on a vacant lot at Schofield Street and City Island Avenue, and is being pushed by the Yonkers-based Italian Hospital Society.

A BSA hearing date has not been set, but a lawyer for the developer is scheduled to address CB 10’s November housing and zoning committee meeting, said Barbara Dolensek, vice-president of the City Island Civic Association.

“The structure being proposed is way too big and out of the tenor and the tone of City Island,” said City Island Civic Association president Bill Stanton.

He said he believes having such a large building standing could turn into a problem if the state health department ultimately rejects a license for the assisted living and housing facility for people over age 55.

190 units of anything on City Island just sounds bizarre. Add into the mix elderly people who need medical care, one main street that is a parking lot more often than not, lack of public transportation, etc., and you have to wonder what the developer is really trying to put there.
Posted by Queens Crapper at 12:18 AM

in 1970, one would have never guessed that a proposed four story nursing facility in Bayside would become a fourteen story building. and presently be outbidding prospective buyers for the one family homes surrounding it.

The BSA will rubber stamp the project.
Community boards, etc. have no real say in the matter.

All of those public hearings?
Merely a jerk off session!

Every inch of property in NYC will eventually be built
to BSA standards.

They're a paid arm of the real estate industry!

Is there a four-story building on City Island right now? I don't think so.

if there isn't one now, there will be soon.

Don't the elderly have a right
to be housed within the nabe they grew up in?

I've heard a lot about this project, and I can tell you that there are many rumors floating around about it, many of them promulgated by those who'd theoretically be the competitors of the facility.

I've actually heard recently from a friend on City Island who's active in the chamber of commerce that the head of an existing senior facility (who's also in charge of some cemetery in that area) is saying a lot of really negative things about this project. Hmm, I wonder why! Let's see: there will be a new competitor on her turf who'll be able to offer space for at least 200 seniors! Who'd've thought people would turn to underhanded methods of driving away competition.

City Island's kind of turning into a shit hole anyway, so they probably should count their blessings that ANYONE would be interesting in building anything on that soon-to-be ghetto little island. I don't see what the big deal is over that place. I mean, it was a great place a long time ago, but all the restaurants remaining are mediocre at best.