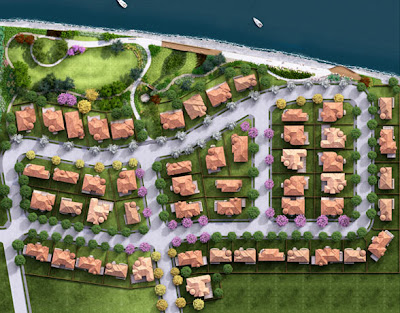 A group of investors is well on its way to taking ownership of one of the largest vacant waterfront properties in Queens, which could soon be home to 52 single-family Whitestone homes, but state inspectors were back at the site last Thursday to check for evidence of any contaminated soil dumped there.

A group of investors involved with Barone Management, a firm that has both construction and development arms and is based in Whitestone, have paid a deposit on the 13-acre property, at 151-45 6th Road, and will likely take full possession of the property within 60 days, according to Scott Barone, whose family owns the firm.

“In a perfect world, development will begin in the middle of next year,” he said.

The property also includes 8 acres of water rights and will feature a publicly accessible waterfront park, as is required by city regulations.

It was originally zoned for manufacturing until about 2005, when a development firm called Bayrock Group bought the site and sought to rezone it for residential use.

The city modified the zoning to specifically allow for the development of 52 single-family homes, according to area lawmakers, but Bayrock went bust and the property descended into foreclosure.

Barone said the development will be a boon for the area, setting a precedent on converting old manufacturing sites into residential tracts in character with the rest of the sleepy neighborhood.
Posted by Queens Crapper at 12:50 AM

How far above sea level are these properties?

If the city is really worried about the increasing sea level do to global warming, why build close to the water (like Al Gore did in his new home in CA) ?

We do NOT need more people.

Hey, ask the mayor to help - he is soooo green, eh?

There's no such thing as global waning, so why worry about Al Gore's house?

Because Al Gore told us to.

Manhattan and Brooklyn waterfronts are getting public parks in the form of shoreline trails, while our borough's waterfront goes to private developers. Shame on our elected officials for allowing this opportunity to slip by!

Shame on our elected officials for allowing this opportunity to slip by!

That's your problem - standing back while your electeds are seduced by the developer's donations?

If you do not assume the adult responsibility for your own fate, someone else will be the adult in the room - and do what benefits THEM!

Great, summers they will get a good wiff of the dozens of rotting garbage barges from Bridgeport CT slowing to work the turn down the east river every hour or so.

Who's building it, Joe Mattone?

Exact same thing going on in Staten Island - about 90 homes going in on a potentially contaminated site, in the shadow of the Bayonne Bridge (you know, the one with the BIG "raising" project?) in a neighborhood where students are educated in mobil class-rooms in the school yard...)
Oh, yeah: on a parcel that has a creek running through it, that should have been id's as freshwater wetlands when the CITY surveyed - and that is within the current FEMA flood zones, not to mention 100-year. Homeowners will NOT be able to insure their houses.

And, yeah, goombahs all the way: one of the prinicples owns a towing company, scrap metal, welding, and law firm (?!) and the architect is Vito Fosella Sr. Work had started without permits: they don't need no stinkin permits!

Contaminated dirt has been illegally dumped back in the site and Barone Management is collection the funds under the table.....Nobody is cleaning nothing, its all a scam. just like Barone Management