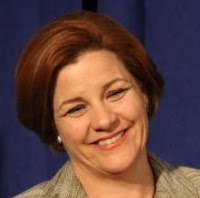 A bill passed by the City Council Monday will require restaurants and other businesses regulated by the Health Department to post a “quick response” code by next year that can be scanned with a smartphone to pull up instant information about the business.

But the bar codes won’t be on the letter grades posted in restaurant windows. They’ll be inside, on permits that are often posted behind the bar.

Putting them on letter grades would cost more since it would mean printing the grades individually for each restaurant, but Council Speaker Christine Quinn said she’d like to eventually put codes in the window.

What would have become of society if they hadn't passed this? What if you don't have a smartphone? And if they're posted behind the bar, how would you get to them to scan them?

Homelessness, lack of police, problems in parks? Who cares? We simply must know if there's soap in the employee bathroom!
Posted by Queens Crapper at 12:24 AM

It's too bad that the city council
isn't as smart as some of these smart phones!

Meanwhile back at the ranch,
(picking just one example) the DOB isn't doing
it's job properly.

Does Mayor Mike care
about important issues like that?

Apparently all he cares is about is some tourist
getting a tummy ache in a "B" graded restaurant.

It looks more like feeble,
extremely IMPOTENT legislation to me!

How about a law requiring the permit or copy be posted in the window. Can include URL next to barcode. By the way you can look up the resturaunt info on nyc.gov doh. Wait, how about just posting that info about the inspection in the window next to the letter grade - and don't hide it with todays' specials sign.

I wonder if some of those posted window displayed letter grades are, in fact, forgeries.

It's easy enough to do with today's technology.

Rosa's Pizza on 69th St. gets a "B". That's about all I have to say about the grading system.