Everyone except Bloomberg thinks streets are filthy 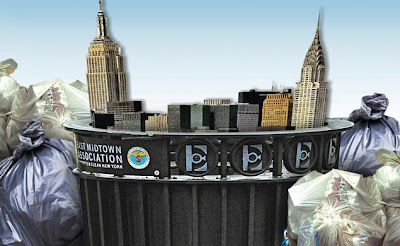 New York has been named the dirtiest out of 35 American metropolitan areas by the out-of-towners who read Travel + Leisure magazine.

Tourists cited New York’s garbage-piled sidewalks and funky odors to shove Gotham to the top of the trash heap in the poll, which is part of the magazine’s annual America’s Favorite Cities survey.

The magazine polled 50,000 people online, but the tourists were the harshest.

You’d think New Yorkers would be quick to defend the capital of the world — but the nose knows; city residents ranked our rankness as the second-worst in the nation, behind, obviously, Baltimore.

Of course, Mayor Bloomberg covered the stench of defeat in a floral spray of spin.

“Sounds like the people in this survey haven't been here in a long while,” said mayoral spokeswoman Julie Wood.

The city’s 50 million tourists last year, she added, “saw for themselves that the city is cleaner than ever.”
Posted by Queens Crapper at 12:45 AM

Agree - I am in a business that takes me all over Manhattan - it's the same everywhere - folks allow dogs to SH*T on the sidewalk but pick it up but now that residue smells. Thankfully there is a trash can on most corners but there is traces of gum on the sidewalks everywhere. If there is trash remnants in Queens on my residential block, the neighbors all save pennies by putting out garbage in little pink translucent market bags instead of using garbage bags or cans.

The fix: Residential areas should be using garbage cans - this eliminates much of the garbage flying about if opened. Make it illegal for scavengers to open garbage bags. For commercial storefronts: do what most European store fronts do : hose down the sidewalk in front of your store. The sanitation Dept sweepers are ineffective - they simply move around the filth and it smell worse. Make every residential and commercial owner responsible for their curb at the street. Enforce or create law that pets use the street & not the sidewalk. This would help eliminate the foul smells everywhere!

Street sweepers ineffective ? Maybe you would like to come to Redfern ave. on a Tuesday and Wednesday and see the before and after the sweeper goes by. The sweeper is mechanical not every piece of trash will get picked up and when cars don't move it becomes impossible. and I do agree with shop owners being responsible for their patch of sidewalk

Everyone but Bloom-Hitler thinks that NYC is worse off under hizzoner Der Fuhrer!

The stinky garbage can't compare with the stench of corruption and mendacity that has festered under the Bloomberg administration!

Street sweepers ineffective ?
I've seen many sweepers at work in Queens and it seems that most just move the debris around and do not collect the detritus.

Also, it's not only streets that need a clean-up. Ever take a look at the shoulders of the Queens highways? What a mess. Pebbles, water bottles, car parts, weeds, plastic bags, food containers, etc. decorate the edges in a foul way.

Here's an idea-- clean the sidewalk in front of your store/shop/building/home. Kinda like I used to see shopowners doing in the old time movies. Never occur to you? Too busy hating on Bloomberg? Maybe we should just put more union public employees on the civil service payroll gravy train to scrub the place with toothbrushes and listerine. Yeah, that will solve the problem.

Have to ask - Is it the mayor or the citizens that are making the mess ?

I'm a public employee and I agree completely with anon #6, shopkeepers don't sweep anymore their belief is its the landlords problem or they come from places so filthy and corrupt that civic duty is not something they understand. Also people in general are pigs and will drop their litter at their feet while walking

Lots of buildings and restaurants in Manhattan do wash/hose down the sidewalks. What remains is gutters of nasty stagnant filth water because the streets are not properly designed/maintained for proper drainage.
Most of the real nastiness and funk comes from restaurant/food garbage and the trucks that pick up this waste. This is well beyond sweeping up litter.
Went to San Gennaro the other day, you should see the streets around that area. Would it be that much to power wash the area before setup?

#1... i second your comment on the dog walkers in Manhattan . the streets and avenues sidewalks stink,especially in 90 degree heat.

the U.E.S. outdoor diners must wear nose clamps to endure a meal at the "PAREE Sidewalk Tables". what a bunch of jerks ?

BTW the survey must not have included Jamaica ,Queens ,because it is located in the "suburbs", where some of themulticultural human debris throw their debris on the sidewalks and street.

All supplanted need to make sure to sweep their fronts by 11:00 am otherwise a summons is issued. After 11:00
anything goes and shipowners don't need to clean
By the time rush hour hits the sidewalks are a disaster
DSNY needs to change this idiotic rule and enforce cleanin the entire Business Day!

If New York is the dirtiest city in the USA, then Jamaica Queens is at the top of the list for dirtiest place in New York City. The number one problem, the people (includes property owners, business owners, landlords and the like) who think nothing of throwing trash on the streets or sidewalks, never give a thought to cleaning the front of their properties, rarely use garbage can lids (hell rarely use garbage cans). BUT the city leaders and officials rarely bother to enforce litter laws as far as individuals, property owners and businesses go. Hell, sanitation enforcement officers could spend all day just in Jamaica walking around issuing violations/fines increasing city income to hire even more enforcement officers to tackle the problem. But when not much is done to curtail people from throwing litter or not cleaning in front of their property, they will continue to engage in this behavior. But when you have an administration that concerns itself with how much soda someone can drink as opposed to tackling the litter problem, well then you have NYC as the dirtiest city in the USA. But still a one bedroom apartment in Manhattan goes for a million.

What NYC really needs
is a good clean sweep in the city council chambers!

Throw all the real estate industry suck-ups out,
even if it winds up leaving the room empty!

Then, recycle Bloomberg to Siberia!