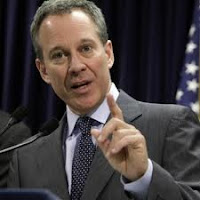 “If the Assembly wanted to, they can convene a committee,” Schneiderman told the Daily News, explaining the removal process. “The only requirement is that there is an investigation by a committee that issues a report to the full house.” A vote is then held.

The Assembly Ethics Committee has already reviewed and substantiated two claims of sexual harassment that former staffers made against Lopez, the once-powerful boss of the Brooklyn Democratic Party. But Schneiderman, who became the latest high-ranking Democrat to call on Lopez to resign, said a new committee must conduct a second investigation before the Assembly could hold a vote to expel.

There is recent precedent. When Schneiderman was a state senator in 2010, he headed a committee that recommended the expulsion of then-Sen. Hiram Monserrate, who had been convicted of misdemeanor assault on his girlfriend. The full Senate voted to get rid of him, making Monserrate the first sitting state lawmaker to be expelled since 1861.

A lawmaker is automatically expelled from the state Legislature if convicted of a felony. Lopez has not been charged with a crime. Monserrate’s expulsion, however, was officially linked to the fact his actions damaged the “integrity and reputation” of the Senate and showed a lack of fitness to serve.

“You do not need to have a criminal conviction for an expulsion,” Schneiderman said. “That was not the basis for our expulsion of Monserrate.”

Great, now how do we can Schneiderman for not only knowing about this, but going along with it and saying nothing until the shit hit the fan?

Why is the press giving the state's biggest watchdog a pass for his involvement in this mess? And since Cuomo is saying it was an open secret deal, why not investigate him, too?
Posted by Queens Crapper at 12:05 AM

they all belong in a rubber room, permanently without pay and benefits.

They should remove also Silver, as he participated in the cover-up of the LopezGate affair, just as Nixon did in the Watergate affair.

Am I hearing conflict of interest?

It may be that Dan Donovan will be the only one who can investigate this thoroughly. Unfortunately, this is not all necessarily criminal, though the grand jury he convenes will be able to issue a scathing report ... which will probably be ignored.