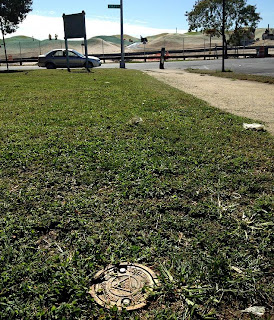 High levels of explosive methane gas have been discovered next to Bronx homes that abut a dump the city is turning into a golf course for Donald Trump, a Daily News investigation has found.

As construction of the $97 million links has accelerated this year, methane in quantities the state considers potentially volatile has been repeatedly detected in test wells just yards away from homes.

Residents of this working-class neighborhood had no idea — and weren’t too pleased.

“That concerns me. What are we breathing?” asked Stephanie Machuca, whose Balcolm Ave. condo sits about 25 feet from a green-capped well that registered excessive amounts of methane in May.

The Trump golf course is now under construction on top of a dump that was closed in 1963. The decomposing garbage that’s still underground creates methane, a highly volatile gas that’s been percolating under Ferry Point for years.

Occasionally the test results showed higher levels of methane. But in recent months, the tests have regularly detected concentrations at the project’s edge far in excess of the LEL, records show.

The state is aware of this rash of high methane levels. In response, it has decided not to shut down construction but to increase the frequency of monitoring. “We’re concerned about movement of landfill gas.

Okay, why the hell are we building a golf course for Donald Trump? And using shady contractors, to boot?

And wait until some more of Bloomberg's legacy parks start doing it only on a grander scale-the parks being developed on the former Fountain Ave. and Great Kills landfills, to mention but 2.

Before our family moved to Queens in 1955,
I grew up in the Clason Point section of the Bronx and visited Ferry Point park frequently.

As kids we use to enjoy watching
the garbage trucks systematically dump their loads on Trump's golf course site since the early 1940s.

As Betty Davis might have said, "WHAT A DUMP"!
It was a veritable Mount Everest of organic trash!

Each day a convoy of white painted sanitation department trucks, followed by seagulls...
regularly lined in military fashion getting ready to drop their loads.

"Phew", we'd exclaim when the wind
changed direction and the stench drifted west
over to the park.

Motorists opened their car windows
only at the last possible moment when paying their Whitestone Bridge tolls (25 cents).

This garbage dump was most "fragrant"
on a hot August day.

You say that it's now belching gas?

I'd say that it's more like Donald's Dump was farting!
Don't light any matches, please.

Shut it down - people lives are at risk!

How can you just shut it down?
It's not as easy as turning off a switch.

There's decades and decades
of rotting garbage down there.

It's got to all be vented first
like they've done in Staten Island's landfill.

I say harness all that Methane gas
and forget about golfing.

The whole area has got to be carefully monitored.

They've dug up more that a can of worms by exposing the substrata through excavating!

Wake up!
There's a bit of social engineering going on here folks.

By putting in a golf course, NYC (via Trump) hopes to displace the "troublesome" Latinos, etc. that occupy
the Sound View neighborhood.

They're hoping for gentrification
and an upsurge in real estate prices.

Do you all get the real picture now?

I can't wait to tee off. That hopped-up ball's gonna soar a mile.

George,
in the Bronx farting was known as "teeing off".

So the presence of Methane is most appropriate.

so for decades this dump location was considered safe for habitation by homeowners and all of a sudden in 2012 it is a hazard ?

beware some one may want to graize cow herds on the dump.then the anti-fart greenies will really start marching in the Bx, like they did upstate when the yogurt industry wanted to expand and raise more cows.

Anon No. 9: Write in English, please?

Crapper: Go up along the Taconic State Parkway in northern Westchester, and you'll find there's a Donald J. Trump State Park. He apparently built a golf course up there.

We ARE NOT talking about the "danger" of cow patties in a farm field upstate.
There are some HAZARDOUS materials buried there!

The belching of Methane
is just from the organic material...
but it carries up various toxins with the farting process.

Back in the day they dumped lead, mercury,
(who knows?) radium ....all kinds of "nice" stuff along with household garbage.

Environmental laws were so loosey-goosey then
(if they existed at all) that ANYTHING went into landfill!

Ahhhh, but no matter...
only the "undesirable" minorities that live there
will be poisoned...then gentrification can get underway.

Let's do what the Donald does to correct a big problem. Comb something over the methane!

Give credit where credit is due. search the Wollman/Trump ice -skating rink in Central Park /E. 63 street ?

he is a capitalist and gets results. do you really believe he is going to subject any golfer to hazardous conditions ? i will vote for his decision making over the socialist failures in nyc government.

Anon No. 15: If you ignore his bankruptcies and junk bond sales.

GM's bailout with taxpayer $$$$$$ of $80 BIllion is preferable to you? would you have enjoyed being a GM bond holder and losing your investment because of the Obama adm. takeover, with the U.A.W.

the stock is down from $53/share to near $30 and they owe the taxpayer$ 25to35Billion. and most "volt" sales are to the fed.gov.agencies.

Waz up Donald...
got nothing better to do than respond to the
criticism of you on Queens Crap?

"The Donald" made his money off of
daddy Fred's fortune.

Trump is a freakin' fake!

Didn't the mob partner up with Trump
to bail him out of his Atlantic City mess?

It looks like we've got some pee party
Archie Bunker types, posting here.