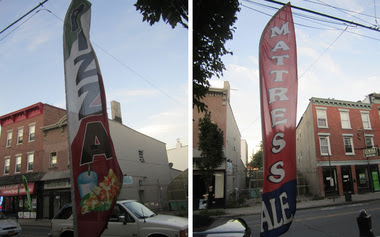 
These days, businesses on Staten Island are getting into the act. And nowhere is this more obvious than in Stapleton on a stretch of Bay Street that extends roughly from Wave Street to Canal Street. In fact, Wave Street itself is all a-flutter -- from the billiards parlor at the intersection of Front Street and Wave, to the car wash at the corner of Bay and Wave streets.

Merchants say the street-side banners, which are placed outside when businesses open and taken down when they close for the night, are a way to distinguish themselves and grab a passerby's attention.

Sam Bari, owner of Bari Pizza, at 596 Bay St., agrees. In fact, he claims he was the first in the area to post banners outside his shop.

"People see it when they're driving; they see the flag," he said, noting that without that extra cue, the awning that bears the pizzeria's name might not be enough in today's competitive environment.

Other stores that have bought into the trend in this neck of the Staten Island include Canal Alarm & Security on Canal Street, which specializes in wireless electronics and mobile equipment and Elite Wireless Electronics at 540 Bay St.


I suppose that SI Live doesn't realize that using public property for advertising is illegal. Businesses drill holes into public sidewalks in order to post these flags or have the portable variety which block sidewalks. Businesses throughout the City have gotten sanitation tickets for this. Of course, there's no mention of any of that in the article.
Posted by Queens Crapper at 12:44 AM

The SAdvance (publication behind SILive) cares little about regulations - all they want to do is fill page-space and suck up to the commercial (potential ad-buying) interests.

When you fill a city with people from places that have no rules, you cant expect them to come here and know how to behave or be a good citizen. its a foreign concept to them (no pun intended).

There are very few rules and regulations in the Third World. These people are here now and they are clueless as to what is legal and illegal. Many of them are here illegally. Unless the city informs them of these rules, anything goes.