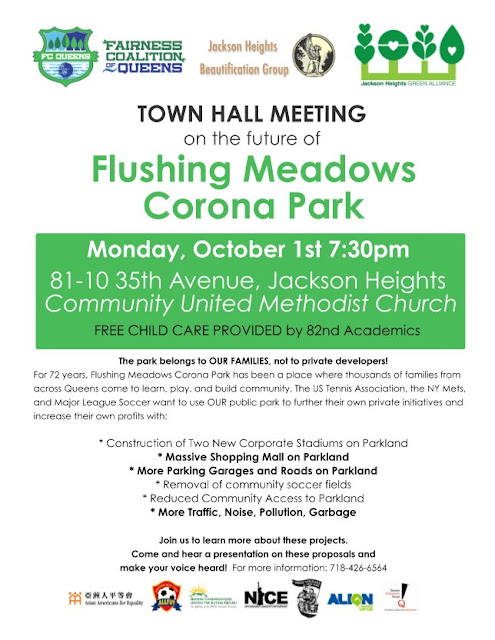 Might there be a crack in their utopia
that couldbe widening?

That sequestered little enclave
have their own internal parkland within each original 1920s building development...so why should the Jackson Heights Beautification people care about FMCP?

I see...
it's the rest of Jackson Heights' and Elmhurst's Latino population that will be excluded from enjoying a day in FMCP if the Wilpons and those USTA bastards are successful in stealing public parkland.

It's they who will become disenfranchised if this happens. They will be robbed of their public park!

Those JH historic district residents will not
really lose a thing.

These elitists will simply retire to their private gardens to enjoy exclusive peace and quiet.

This is all part of the Donald Manes legacy.
Manes even wanted Grand Prix racing in FMCP...remember?

Nobody shouted NO....early enough in the game.
Everybody shut their eyes. Queens does not breed vigilant fighters.

Now it's too late unless YOU VOTERS kick the crap out of office! VOTE ALL INCUMBENTS OUT!

That would be a good start and keep your fucking eyes open on the newly elected ones.

Turn your backs and you'll be screwed again.

The problem is that corrupt officials grabbed even more power...and like brazen cockroaches they now dare to come out in broad daylight and gang rape us tax payers.

There is a lot of false information being put out on these projects.
1) The Willets Point project is not taking away an inch of parkland. Its a development in Willets Point and on the parking lot being used next to Citifiled.
20 The USTA project involved less than an acre being taken. The park is almost 1500 acres.

The parking lot at Citifield is PARKLAND. All 42 acres of it.

All of the parkland -- including property that happens to be used at the moment as a Citi Field Parking lot -- is sacred, and will be defended as such against rapacious, racist developers such as Sterling Equities (owned by the owners of the Mets) and Related Companies. Bad enough that the original Willets Point project was a land grab; now it's that, plus a brazen grab of parkland. In addition, it is a racially discriminatory project that would have an overwhelmingly disproportionate effect on minority groups -- especially hundreds of Latino/Hispanic business owners and workers. Slowly but surely, the imperialist Wilpons' shameful role in trampling minority people and stealing public parkland is becoming obvious -- and they will be publicly held to account for every single step they try to take.

Its a parking lot. There are no trees or grass on it. Its a parking lot which will be replaced by stores. And it was cut out under state law to be used for commercial purposes. That is just the facts. I am not saying anything, but the facts.

I love when people say they are just telling you the facts and they have their facts wrong.

This is mapped parkland. Therefore, to unmap it, it would have to go through the city council, the mayor, the state legislature and the governor. The silly "law" written by Robert Moses in 1961 can no longer be upheld because there is no more Board of Estimate, which would have had to approve the new usage. Besides the laws for parkland alienation were passed in 1965, making the previous law null and void.

There is nothing to unmap. You have the facts wrong. Crapper. There is nothing changing with the use of that land. It is shifting from one commercial use to another. It is currently 100 percent used as a parking lot, it, to a parking lot with more structures on it. It is not being "unmapped."

Please keep posting. You are hilarious. You have absolutely no idea how zoning or ULURP works.

The City owns the property and it is mapped as parkland. Any change to the city map to add or remove parkland requires a vote by the City Council. If it's alienation of parkland, it's also required to be vote on by the state legislature.

Shea Stadium was owned by the Parks Dept, not the Mets or the Wilpons. Therefore the land it sat on is still owned by Parks.

There is no change to the map. its leased to the Mets as a parking lot. They will just change the use of the parking lot. This is a minor thing, but needs approval. you are throwing around terms incorrectly. there is no "unmapping" and btw its called "demaping." these are not mapped streets, so there is no demaping either. no one is adding or decreasing parkland from what i can see. the proposal is on the EDC website.

Yes, it's leased to the Mets as a parking lot. A parking lot and a lease are not permanent takings of parkland. Stores would be, and would require a change to the city map to demap its designation of parkland.

"The following have been determined by the courts to be alienations:
- The conveyance, sale, or lease of municipal parkland or recreational facilities to another public or private entity, such as an adjoining property owner, a developer, or a school district, which results in the facility no longer being used for public park
and recreation purposes."

"What Buildings Are Appropriate in Municipal Parks?

Municipal parks often have buildings that support the park itself. Buildings that are
consistent with park purposes, such as park maintenance buildings and restroom facilities, are acceptable in a park setting.
The Court of appeals has ruled that buildings are appropriate in a park only if they are consistent with park purposes and if they “facilitate free public means of pleasure, recreation, and amusement and thus provide for the welfare of
the community.
The construction of other buildings on municipal parkland, such as schools, town halls, or courthouses, require alienation legislation, even if the buildings serve a public purpose."

You are going to split hairs with me over the terms "unmapping" and "demapping?" They're the same thing. And yeah, the proposal is on the EDC website, which has a history of illegal activity and lying. What's your point?

You ignorant troll...
I think that the well informed "Crapper' has just exposed you as a phony!

Wanna come back for another round?

YOUR "facts" aren't holding up, bub!

You are either a liar or a class "A" dumb ass!