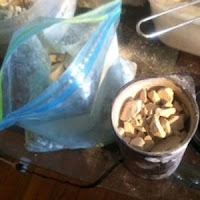 On Tuesday night they saw a person wearing latex drugs, like those used by heroin mill workers, at the site.

After midnight Jose Santiago Diaz, 44, left the apartment, with keys to it, and had a smell on heroin on him when agents questioned him, authorities said.

Diaz, of The Bronx, was identified as an illegal alien who was previously deported to the Dominican Republic. He was charged with criminal drug possession and other charges.

Those who didn't were executed with a pistol shot
to the back of the head.

Afterwards the dealer's family was sent a bill
to pay for the bullet fired.

There are some good sides to Communist China's
old regime's methods.

Swift and certain justice is the best deterrent
to crime.

Of course we could employ alternate methods
of dispatching our drug dealing death merchants.

YES, WOO HOO. The war on drugs is over now. We have won!

Drug dealers and US government alike do not want drugs to be legalized for the simple fact of PROFITS.

On one hand the criminalization of drugs makes the price of drugs insanely inflated, which is magnificent for drug dealers (look at this incident, he had 20 MILLION dollars worth of drugs, for no other reason is it worth so much other than its criminalization) and on the other hand if narcotics are legalized then the pharmaceutical companies (in which the government agencies/politicians have deep involvement in) will lose out to illicit drugs.

Judges, lawyers, secretaries, court officers, police officers, will also lose their jobs, seeing as just about 36% of the prison population is for NON-VIOLENT drug offenses.

You're right on the money
about the very lucrative "law enforcement" business.

That industry would collapse without illegal drugs.

Lawyers would find themselves selling apples on street corners.

Court stenographers would be unemployed.

Printers who specialize in legal forms
would wind up on welfare.

This could snowball into a major financial catastrophe...and who will bail us out?

Who would become the nation's hero if heroin
was legalized?

It's another cesspool in the making
and will soon be gone just like Flushing,
thanks to the 3rd world sludge on its streets.

I'm just glad this den was cleaned out. Richmond Hill is one of the last affordable places you can move and live with your extended family and pursue the American dream of home ownership raising a family. The streets of Richmond Hill are full of families walking together--from all different places--and we need to encourage NYPD continually to remember that and keep it safe for that! It may not look great, but it's home!

oh yeah, the Guyanese & Indian slumlords are turning Richmond Hill into a cesspool. stronger Immigration Laws and use them.