Their silence is deafening 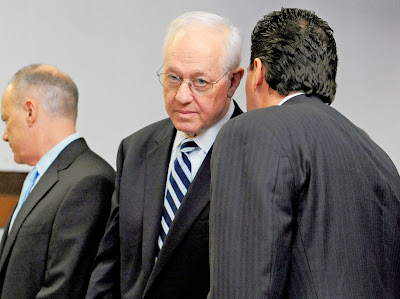 Hevesi, who faces up to four years in prison plus fines for securities fraud, was released on his own recognizance after turning in his passport earlier in the day.

Wow, not one tweeder had anything critical to say?

Oh, wait a minute: “This is not unexpected to those of us who were involved in the 2001 mayoral campaign,” said City Councilman Peter Vallone Jr. (D-Astoria). His father, Peter Vallone Sr., then the Council speaker, ran against Hevesi in a four-way race for the Democratic nomination for mayor. Hevesi finished last and the nod ultimately went to Mark Green.

Would love to hear the babysit...um, Melinda's take on this.
Posted by Queens Crapper at 12:47 AM

Take away his pension and throw this corrupt piece of shit in jail!

And now it's time to play the Family Feud!!!!

Was Melinda seriously the Hevesi's babysitter? Ew. That is gross. (Considering the "canoodling" rumors b/w her and Hevesi Sr.)

Her kid is cute though.

Her kid is cute because it's not biologically hers.

Ever hear the term "Thick as Thieves?" You won't hear a peep out of any politician's mouth when it comes to Hevesi. Criminals stick together. No one will say anything because they don't want their dirty laundry aired. Hope they hang Hevesi high. Lock him up and throw away the key and take away all pensions. I think if he is fitted for his orange jumpsuit, he will spill his guts like McLoughlin did.

I like when the second stringers at EDC or City Planning hatch their latest brainstorm to help developers (and burn up your taxes) and beat up a community in the process.

The politicans say nothing. Absolutely nothing....

"Was Melinda seriously the Hevesi's babysitter? Ew. That is gross. (Considering the "canoodling" rumors b/w her and Hevesi Sr.)"

Some people will do just about anything to get ahead. In her case...Literally!

I use to think she was munching on the Christina Quinn loaf to get where she was.

It's all about the money. The politicians only care about what's in it for them, not what is best for their constituents. That's why they become career politicians -- because it is lucrative. Put term limits on all politicians and you will see a difference. Are you listening Mayor Mike?

a governor can pardon a felon,especially if they are connected at the political hip and public payroll .

look up the pardon list when clinton was leaving the federal government. big time felons and terrorists were let out of prison.a/b/c

he dissed the war dead at the little neck /douglaston MEMORIAL DAY PARADE by campaigning with his name signs.

Remember in November. Vote out all incumbents. Let's try to shake things up and hope for better days. If you vote the same people in over and over again, you give them more time to make money off of you. I'll take my chances with Paladino. I think he'll shake things up. Remember that Cuomo had a lot to do with HUD and all these foreclosures. He'll never get my vote.

"I'll take my chances with Paladino. "

Paladino is an ass wipe. And I'm still voting for him. He'll lose. But at least I'll have sent a message to Cuomo.

Please watch my on going YouTube series on Mike Bloomberg Steve Rattner, hear no evil see no evil pension fund scandals by Mike's money manager, possible perjury and mayor Mike how do you explain standing by your friend and term limits, flushing democracy down the toilet to NYC school kids?

To Anon No. 11: So has every other Chief Executive. Republican leaders have made some beauts among their pardons as well (starting with Mr. Ford).

Andrew Cuomo won't make a move to let Hevesi off of the hook - if for no other reason than not wanting to give you guys something to work with.

To Anon No. 12 - you take chances with a new product in a supermarket, not a lunatic who specializes in shooting from the hip and hitting himself in the foot. Wait for the debate. He'll make Charles Barron look sane.

Koslowitz had nothing to say because she despises Hevesi (and Melinda for that matter). AND THAT'S A FACT!

if A.Cuomo is so honest,why did he have to try to sneak into the fund raiser at the plaza hotel ,for Charlie Rangel.

it was reported that he used a tunnel from a restaurant on the 59 street side of the hotel. why not enter through the front lobby,in order to get photographed by the media? after all, this is prior to the election.

oh!! was he photo shy to be connected to a democrat in trouble with the federal government ?

prediction: hevesi does less than one year behind bars...... he may collect about $200,000.00 per year in pension money , for scamming public funds while "SERVING THE PEOPLE" of n.y.s.

and if he ran for office ,the same schmucks would drink the koolaide and vote for him and his.

Prediction: No pardon and a stiffer sentence. And his political career is finished,

Hope they cut him a deal and he throws his political friends under the bus. I can just imagine all the theft and shenanigans going on. Too many shady deals going down and on our dime.

according to the book "CITY FOR SALE" by Wayne Barrett, this politician gave the eulogy at shamed queens borough president D.Donny Manes's funeral on queens blvd.

was not there a corruption scandal involving local liberal/democrat politicians then?
they have no shame scamming the tax payers,who continue to vote for scum.

was it not a queens blvd. lawyer(working for a democrat politician ),who confessed to reporter jimmy breslin that they were the "bagmen" for Queens B.P Donny Manes. the scandal went dead when manes committed suicide. this was thirty years ago. the local culture of corruption continues today in the democrat party.

when the n.y.s. democrats voted to disbar this whistle blower, he was then reinstated by Mario Cuomo.