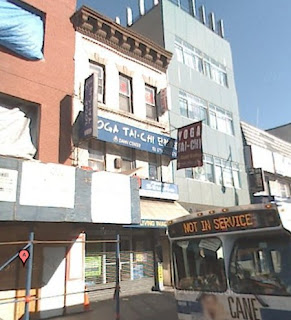 A man was found dead as firefighters extinguished a blaze on the top floor of a three-story brick commercial building in Flushing, Queens, on Saturday afternoon, the authorities said.

The victim, who was not immediately identified by name, was found shortly before 3 p.m. inside the third-floor office at 136-79 Roosevelt Avenue, just east of Main Street, said firefighter Richard T. Viglione, a spokesman for the New York Fire Department.

It was unclear how the fire began, Mr. Viglione said, but a police official said detectives were investigating the death as a possible homicide.

A second man, “with serious burns,” was injured in the fire, and taken to New York Hospital Queens, Mr. Viglione said.

He said the body of the man, who appeared to be in his 40s, was discovered by firefighters were battling the fire.

Update: It may have been a murder-suicide sparked by a dispute over immigration papers.
Posted by Queens Crapper at 9:27 PM

Flushing is a nightmare, get out of Queens now while you still can, run for your lives, what a dump!!!

I CONCUR!! PLACE IS A TOTAL MESS

Sell out politicians accompanied by docile and scared Irish/Italians are the reason Flushing turned into a 3rd world dump.

Maybe if the prior residents had a back bone and some common sense they could have preserved this great neighborhood/town but were talking about Irish/Italian people here.

No doubt that "Chinos" (Chinese) were involved.

What are you all talking about? The local papers all say that Flushing is a VIBRANT! DIVERSE! utopia.

lets not start putting blame on specific groups of people, but rather start a change. Putting labels on asians, italians, russians, etc.? really? Why would you want to be as ignorant as those who chose to do these heinous acts. Shouldn't you be the one that starts the change? DON'T BE IGNORANT! LEARN AND MAKE WAY FOR CHANGE!

Vibrant and Diverse:( MY Ass!!! This place is Insane:( I have never seen such RUDE,NASTY,CUT THROAT F"RS In MY LIFE:(

You cannot identify a body that has never been documented?