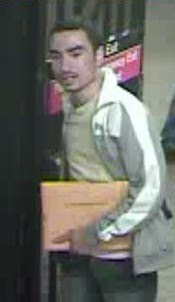 On Tuesday, September 14, at approximately 5:45 p.m. a suspect called 911 and informed the dispatcher that there was a bomb inside of a bathroom on the mezzanine level of the Union Turnpike Subway Station at Queens Boulevard and Union Turnpike. A search of the area was conducted by police officers of the 110th Precinct with no suspicious devices being found.

At 6 p.m. another call was received by 911 from that there was a bomb inside of an “E” train at the Roosevelt Avenue Subway Station at Broadway and Roosevelt Avenue. Again, a search of the area was conducted, this time by the 112th precinct, with no discovery of any explosive devices.

The suspect is described as being a white male between the ages of 18 and 20 years old with height of 5 feet, 3 inches to 5 feet, 5 inches tall. He was last seen wearing a gray and white jacket with dark jeans.
Posted by Queens Crapper at 12:32 AM

I think I need NEW GLASSES?? Because Dude doesn't look White "CAUCASION" to me??

i agree....middle east or hispanic ethnicity

The Gazette reported this poorly. The 110 precinct responded in Kew Gardens?

Why this guy as a suspect - seen coming out the bathroom or is this a Gazette writer?

The photo has nothing to do with the story. It's just crapper's way to continue the rant against anyone immigrant and not white.

first of all, the guy looks like italian. he'll be on the jersey shore yet, just wait.

secondly, "Caucasion" which, ironically, given I would think you'd be intelligent by your brilliant comment, is actually spelled Caucasian. go figure.

lastly, middle eastern people are technically white or caucasian. just check your latest census. even bin laden himself wouldn't be entitled to any type of minority funding, like the FAFSA for college, which many of you obviously haven't ever filled out.

no matter how much middle eastern people are discriminated against, as is evidenced time and time again on this blog, they are still considered to be white.

the quality of this blog has really fallen. there was a time when it focused its time on showing the corruption and over development that plagues our borough. what happened? i feel like all i see are racist tirades. not even worth reading anymore.

getting old crapper or just too racist to actually care about real issues anymore?

I posted a story about a crime and you accuse me of racism?

Get your head out of your ass.

Jesus, the guy post a story and some of you knuckleheads call him out as a racist. People that look for racism where there is none...are themselves racist. Think about that before you play the race card.

And I agree with he looks middle eastern or Hispanic. I'd be shocked if he was Italian cause he doesn't look it one bit. Which means he'd fit on the Jersey Shore cause most on it aren't Italians.

That was really nice of the 110 precinct officers to handle the job, especially considering the Union Tpk station is on the border of the 112 and 102 precincts.

This guy is either a prankster, or is part of an operation to test security and first response on the subways.

he looks like he has Mohammed Atta (W.T.C. bombing terrorist) DNA. he was an Egyptian.
Egypt, the home of the muslim brotherhood. the same one that assassinated Sadat.

He's probably Greek and owns a restaurant and is pissed about the current parking situation.

Anonymous said...
The photo has nothing to do with the story. It's just crapper's way to continue the rant against anyone immigrant and not white.

Oh stop it:( I'm not WHITE and CRAPPY doesn't have a problem with me:) So maybe it's you:)

Anonymous said.. secondly, "Caucasion" which, ironically, given I would think you'd be intelligent by your brilliant comment, is actually spelled Caucasian. go figure.

Really, well pal you should know that one should capitalize at the beginning of a sentence:) And "i" should be "I" Numb Nuts:) LMAO But you already know that because your soooooo smart:) HeHeHe

The website describes him as a white guy. WTF he obviously isn't white. Fucking blame whitey liberal website I shit on you Queens Gazette.

I'm bothered that they would so blantantly misrepresent this. He's definitely not white. It does no good to pander to
lawbreakers in the fear that their ethnic groups will get upset.

Why don't we wait for this guy to get caught? Then we'll know what his ethnicity is.

Awe;~) BooHoo Get your fat ass off your sofa and make me;~)