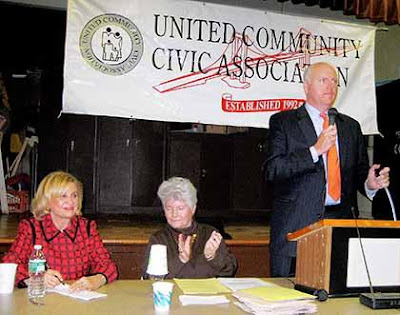 While the political climate in Washington, D.C., is one of the most polarized U.S. Rep. Anthony Weiner (D-Forest Hills) said he has experienced, he hopes to forge ahead with comprehensive immigration reform if elected to another term.

“It’s gotten harder and harder to find issues that don’t send people to their own corner, but I want to find them,” Weiner said during a sitdown interview with TimesLedger Newspapers last week. “We have to solve this immigration problem, and I’m hoping it’s something we can do in the next Congress, whether it’s a Republican or Democratic Congress. The president has said he’s committed to it and it’s an economic imperative for New York City and a law enforcement and anti-terrorism imperative for the country.”

Weiner, a Democrat being challenged for his seat representing the 9th Congressional District by Republican Bob Turner said national immigration reform should include tougher borders. He also advocated creating a process in which an undocumented immigrant who is here with a job and is learning or knows English could pay a fine in order to remain in the country and land on a path toward citizenship.

On the subject of health-care reform, Crowley said the Patient Protection and Affordable Care Act passed earlier this year was “an issue that hasn’t seen the full light of day.” He discussed some of the benefits of the bill, such as the removal of lifetime caps, nixing the practice of barring children based on pre-existing conditions and allowing children up to the age of 26 to be covered under their parents’ plan.

When asked about why the bill was so long, Crowley said the provisions contained much more detail than simpler-to-explain options for health care.

“Yes, I do think it’s over-complicated, and that’s what lent it to being misinterpreted,” Crowley said.

He also said there had not been any changes on reforming immigration in Congress.

“We still know we have a problem,” Crowley said.

He said he believed the United States needs to have meaningful control of its borders, but also must reform its legal immigration system, saying the backlog for those wanting to move into the country stretches back for years.

When asked why illegal immigrants could not just be arrested since they were here illegally, Crowley said he did not believe that could be done without infringing on the constitutional rights of American citizens as well and said a roundup of illegal immigrants could violate the Fourth Amendment to the U.S. Constitution, which guards against arrests without probable cause, and the 14th Amendment, which covers citizenship and due process.

“We can’t just build walls,” Crowley said. “It’s not going to stop them entirely.”
Posted by Queens Crapper at 12:07 AM

I find it absurd that our (New York's) Congressional candidates continually tout the reform in the Health Care Reform law which in reality is merely a Health Insurance Reform Bill and does not address any health care related issues. More absurd is the assertion that the law made it possible for children up to age 26 be able to stay on their parents' insurance. In New York, that had been law for a number of years before it was passed in Congress so there was no change for New Yorkers except that now we will have to further subsidize insurance coverage in the other 49 states.

So Crappy, you used to comment on politics. Now, as often as not, you increasingly just report the news.

Stories on abused cats and random shots in the night we can get on Channel 2.

What is your opinion on these politican's stances with these issues?

Anon No. 3: Are you reading the same website that the rest of us are?

And a cutting edge blog that used to focus on tweeding issues and overdevelopment is toning it down and slowly morphing into Channel 2 News.

This is why I will never vote for Joe Crowley. He is more loyal to illegal immigrants than to the Americans who voted him in to office... after Manton was coerced into putting him in office. Crowley does nothing for Irish Americans except to treat them like second class citizens.

The people employed in his offices around Queens and the Bronx are Hispanic, with heavily accented voices, they clearly discriminate against Americans as they spend all their time assisting illegal immigrants, the jack pot baby production line.

try this at your local politician's office. Go in to say hello and find out what they can do for you. If you are not an illegal immigrant, it will be nothing. see who works for your elected official.

Time to kick Crowley to the curb. He has too much power and only cares about the illegals. He does nothing for his constituents and doesn't even live in his district anymore. He lives in Virginia and probably sends his kids to private school with kids that speak English. He loves the illegals and will give them anything they want. The Americans are left out in the cold. Let's change things up and vote all the incumbents out. Give someone new a chance. It can't get any worse than it already is.

Am all for "reform" as in throwing bums like Crowley and Weiner out.

some details in the obamacare democrat health bill/law that our local reps. are dodging at candidates nights:

pg 22 Mandates the Government will audit books of ALL EMPLOYERS that self insure.

pg 30 sec.123 -there will be a GOVERNMENT COMMITTEE that decides what treatment/benefits you may have.

pg 65 sec- 164 not everyone will have to go on the plan.There will be a separate,subsidized plan for Government retirees and their families including Unions & Community orgs.(ACORN).

pg 127 lines 1-16-DOCTORS -the GOVERNMENT will tell you what you can earn.

or they would have to drop the coverage.
the unions SEIU,AFL-CIO had their employees medical insurance benefits exempted from income tax payment in a weekend /backdoor meeting with obama

this forced law has to be defunded and repealed .vote the republican/conservative line on tuesday .

the independent line,some say, has listed schumer,gillibrand,ackerman and weiner.they voted for obamacare.check it out and vote for freedom to buy your own insurance.

I'm voting all the incumbents out of office. I think politicians should have term limits. If term limits are good enough for the President of the US, then it should be good enough for ALL politicians. I'm all for public service, but it shouldn't be a career job. Let them get jobs in the private sector (if they can) and see what it's like to work a real job.

Anyone who's interested can check out how these representatives spend your Tax money at:

Joe Crowley is a sellout, vote him out of office.

Weiner should be deported to Mexico, period. Crowley should be placed on the border laying bricks for building walls, instead of a wetback doing it.

Take their jobs away on Tuesday!