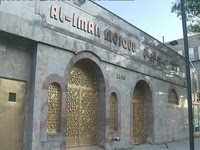 This is a followup from a previously reported story. In a nutshell, the mosque said on WPIX TV that the reported incident of a guy entering the mosque and peeing on prayer rugs never happened, then accepted a donation for new prayer rugs from an out of state rabbinical student. I wrote to the Voice about it, and they followed up on the discrepancy. Here is the second follow up from the Village Voice:

After a visit to the mosque last week, we've learned that the $1,185 donation by Barenblat for a new prayer rug was received and that the new rug has been installed.

We also got in touch with Barenblat, who told the Voice she'd spoken with her contact at Al-Iman, who informed her that Rivera did urinate on the rug inside the entrance to the mosque. Barenblat's contact, who asked to go unnamed, said that while the entryway is not used for praying on a daily basis, it is used for praying on Fridays and holidays when the mosque is at full capacity inside.

"Even if the scope of the damage isn't as great as was initially reported -- meaning if Mr. Rivera urinated on the rug in the entryway which is only sometimes used for prayer instead of urinating on all of the prayer rugs -- I still think the gesture of making the donation was worthwhile," Barenblat said.

So it seems the matter boils down to whether the entryway is considered "inside" or "outside" the mosque. During our visit, we were shown the spot where Rivera urinated, on a rug in the right-hand corner of the entryway -- definitely on the inside side of the door. This, of course, conflicts with the police report that identifies Rivera as having peed outside.

I call bullshit on this attempt at damage control.
Posted by Queens Crapper at 12:03 AM

Why do you care about this?

Because I think lying in order the generate attention, sympathy and donations is a big deal. Shame you don't.

or is it because they are Muslim? Hmmmm

Ok great, so I guess in your mind, if you are Muslim, you should be allowed to get away with lying to generate attention, sympathy and donations.