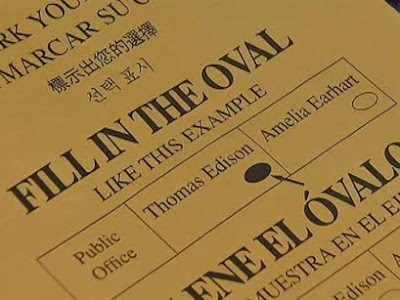 Talk about turning voters upside down.

New York's new ballot has a head-spinning set of instructions on the back, which, if followed to the letter, could lead to an incorrect vote.

Here's how it happened -- or, as the kids say, went down.

State lawmakers approved the language, and it got certified by the U.S. Justice Department. That language reads: "To vote for a candidate whose name is printed on this ballot fill in the oval above or next to the name of the candidate." Except of course, that's impossible. All of the ovals appear underneath the candidate names.

But George Gonzalez, Executive Director for the New York City Board of Elections, said critics should take a deep breath. "This was the same ballot 400,000 people cast without a problem," he said, speaking about primary night.

Yet, there were myriad other issues during the September 14 primary -- from less-than-informed poll workers to machine malfunctions. But improper voting due to faulty instructions was not one of them, said Gonzalez.

Nice. Other new ballot shenanigans are being investigated.
Posted by Queens Crapper at 12:10 AM

They should also investigate the conduct of polling place workers during the primaries. A family member voted at the (Astoria)Variety Boys Girls club on 21st and was annoyed that one worker watched over her should as she voted. This worker even insisted that the ballot was face up as she took the ballot from my relative and scanned it into the machine. I was under the idea that each voter could scan the voting paper themselves. What happened to the idea of privacy in our voting booth?

The ballots worked fine on the primaries and have in other states for a long time.
The worker scans it for you into the machine where the ballot stays right in front of you.

Pretend I am dense but what does your link have to do with the blog posting. I am not a member of the tea party or any political group. Did you even read the link within the posting or read any of recent stories about voters angry with the ballot processing.

I can find more links in case you want to be informed.

How convenient for The Board of Elections to change everything just before a big election. Their aim is to confuse people and to goad people to vote Democratic. The Dems are running scared and the incumbents want to keep their jobs for another term. They should shelve this new system and start fresh after the election. I just hope all the voters figure this system out and VOTE OUT ALL INCUMBENTS on Tuesday. Send a message that we are smarter than they think we are.

There are as many Republicans as there are Democrats on the Board of Elections. This is a bi-partisan screw up.

Hey both of the parties are screwups. I don't trust either of them. Sometimes it's good to be Independent. You are supposed to vote for the best person for the job, not the party. Sounds like the Party's Over. Vote out all the incumbents and let's start from scratch.

Gonzalez, a Dem hack from the Bronx, just got fired after insisting that everything went swimmingly in the primary.

If people cant figure out the ballots then thats really sad. AS always NYC is the last state to get something up to date. Lets not forget that these are not the machines like the ones that were tampered with in Ohio and Florida by the Republican party in 2006 which is sending finally republicans to prison for their fixing with Diebold machines and redistricting state maps.

Tom Delay is about to spend some needed time in prison for that in Texas so his legal defense fund from dominoes pizza CEO is not helping. Say hello to Scooter Libby for his treason if he is still in for taking the fall of the fall of the vice president outing a covert agent.