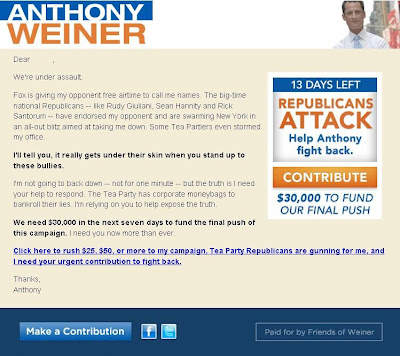 Fox is giving my opponent free air time to call me names. Only the thin skinned weasel he is could write that opening line. Schumer's butt boy is all he is.

AGREED!!! Look at Ackerman's use of $100,000+ to hire attorneys to cover up his illegal activities regarding the Israeli government and his buddies in the financial and aerospace businesses!

Yet - the Queens Dem lemmings will vote him in.

By the way, here's QC's article about Ackerman lawyering up:

That little weiner should be scared. He's a lousy politician and a big cry baby. Did anyone catch his hissy fit when they voted on the 911 health bill? I'm so tired of the same old recycled politicians who don't do anything for us. Vote for Turner. Let's give someone new a chance.

Bob Turner is running against Weiner.

To my knowledge, Turner hasn't landed one personal attack against Weiner.

Turner has made it very clear he disagrees with Weiner on all issues, but Turner has never gotten personal.

Remember in November. Name one thing this little turd has done for his constituents. Vote for Bob Turner. Let's start fresh and flush the weiner down the crapper.

But what did his mom say about him marrying a moslem woman?

Forest Hills voters: Remember when Weiner was head of the Transportation Committee in Washington and yet he allowed $25million allotted to the MTA to renovate our 71 Ave subway station, suddenly disappear! Where did the money go Tony? And why didn't you fight to have our disgusting station fixed up???!!!

We hold these truths to be self-evident, that all men are created equal, that they are endowed by their Creator with certain unalienable Rights, that among these are Life, Liberty and the pursuit of Happiness.—That to secure these rights, Governments are instituted among Men, deriving their just powers from the consent of the governed,—That whenever any Form of Government becomes destructive of these ends, it is the Right of the People to alter or to abolish it, and to institute new Government, laying its foundation on such principles and organizing its powers in such form, as to them shall seem most likely to effect their Safety and Happiness.

On November 2nd you will have a privilege of echoing these words with your vote. Make it for Bob Turner.

I thought Hevesi was Schumer's buttboy.

"Turner has made it very clear he disagrees with Weiner on all issues, but Turner has never gotten personal."


This from Bob Turner's website about Weiner's voting record:

Yeah, so what's your point Turner? Did you vote NO on regulation of the sub prime industry? Are you part of the problem. Did you allow our economy collapse by protecting the scumbags who ripped everyone off and caused the largest recession since 1929 and then got bail out money with our taxes?

WITH MY FUCKING TAX MONEY?

You're actually PROUD of this voting record?

Are people supposed to forget that our children have NO future in this country because you let WALL STREET RAPE THIS COUNTRY AND WE'RE SUPPOSE TO FORGET THIS?

GO FUCK YOURSELF YOU STUPID BASTARD!

Weiner had nothing to do with it, but there's going to be a lot of work taking place at the 71st Avenue ststion very soon.

Hopefully Turner will "Turn" things around. One can only hope. I think he will be a refreshing change from this egotistical moron. Remember in November and vote for Turner.

democrat candidates say the strangest statements when they are in a political election sinking ship :

ackerman at Bayside last night: i did support George Bush ??????
i created thousands of jobs at the Tribune, like the one for Mitch Albom???? i will rework the MEDICARE/MEDICAL ADVANTAGE plan for senior citizens???(which obamacare has cut from 11 million seniors in 2014.)

don't ask questions ,i have to go to another candidates night meeting.( the hosts)

i recommend running for office with NO OPPOSITION??

He's finished? Would that it were so, but I fear the Forest Hills Jewish Mommies will vote him back in...

While Weiner is betting on the vote of old-time Jewish grannies, younger Jews are more receptive of Turner's message. His ads have played on Russian language radio and in Orthodox newspapers.

My new motto is: Don't ask me for campaign contributions until after you prove you've done something that improves my way of life and so far not one of them has. Either side is not worth my vote.

If you do not vote you forfeit your rights and turn your back on every American soldier that sacrificed or died for our freedom. Bob Turner is not asking you for your money, just your vote. How can he prove anything to you if you don’t give him a chance?

Bob Turner isn't career politicial who makes a living at the expense of every taxpaying American.

Weiner lives off the blood, sweat and tears of the private sector.

By default, every decision Weiner makes, helps advance his career at the expense of the people he's supposed to represent.

That's what happens when you're a career politician.

Has Weiner, Avella and the whole lousy lot ever held a REAL job? One where they didn't feed on the puiblic teat?

at a Bayside candidates night, Dr.Milano, St.Francis hospital ,republican/independent congressional candidate discussed the forced obamacare law which will be in effect in 2014.
he stated that $500,000,000,000,00 (billion) has been cut in medicare benefits from senior citizens. the medicare/medical advantage plans will be cut from 11 million seniors.(an excellent plan for seniors) with no premiums except for $110.00 of s.s.i. monthly contribution,$15.00 for doctor visits, and RX reduced rates.
the average senior will have to pay an extra $3600.00 per year when this democrat forced law becomes law in 2014.

a new congress majority in 2012-2014 is planning to
repeal this bad law or defund it.

some states are filing law suits claiming that the law is unconstitutional. the federal government can not force a citizen to purchase medical insurance or any product, under the commerce law.

Cong. Ackerman escaped the meeting with out discussing his vote for this law, because he had another meeting to attend and the hosts,all U.F.T.union members with medical coverage exempt from the obamacare law, permitted this.

"Cong. Ackerman escaped the meeting with out discussing his vote for this law, because he had another meeting to attend and the hosts,all U.F.T.union members with medical coverage exempt from the obamacare law, permitted this."

They WON'T discuss it. I've written Weiner's office numerous times asking him to justify his vote by citing statistics proving it's what his constituents wanted.

What ever happened to government by the people,for the people? I don't care what party they belong to,I'm voting against all incumbents.