Hiram may yet go to jail! 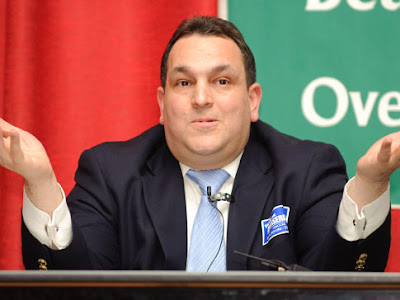 According to Berrero’s report, federal charges will be presented today as part of an unsealed indictment. He reports the charges are a result of Monserrate funneling hundreds of thousands of city dollars to a not-for-profit in Queens called LIBRE, or Latino Initiative for Better Resources & Empowerment. This happened when Monserrate was a member of the city council.

Monserrate’s attorney Joe Tacopina just spoke to NY1 and told them that the former Senator has not turned himself in yet, but will shortly. He expects Monserrate will be in court later this afternoon. Tacopina says he does not know what the charges are at this time, but believes they are in connection to the slush fund scandal.

Photo from the Daily News
Hiram Monserrate Indictment
Posted by Queens Crapper at 9:35 AM

http://www.youtube.com/watch?v=yOYQeRRG_8Q
My governor debate and I address corruption Albany and City Hall

WOW! Monserrate must have stepped on somebody's toes along the way - because "THEY'VE" totally destroyed him. Now he faces charges for this? If he's guilty of some major wrong-doing then definitely he should be punished BUT I'm sure if the city wanted to dig deeper on issues such as these (slush funds)then EVERY city council member would be under investigation!!

there is a god!

He will likley walk again or become a rat witness to a landslide of curruption. Some officials must be shitting bricks.
Now the feds are gonna put every EVERY city council member DA and judge under a microscope.

That's right. This POS came to a civic meeting one time and thought he'd bully everyone in the room to give him what he wants. I wanted to put his nose on the other side of his face outside the meeting and it's good for him he decided to shut up on the way to his car.
He's an egotistical prick who deserves time in the pokey.

Jail is too good for them. make him and Espada live like homeless people on the street. except they should be monitored and not allowed to go inside at all. not even to go the bathroom, like what is done to NYC homeless. they screwed with NYC tenant rights when they went to the landlord's aid. Espada is in the real estate lobby's pocket.

see how they like living with out heat and hot water in the wintertime. don't let them shower.

Wasn't he a police officer? Now he'll see how things look on the other side of the prison cell door. While we hope for justice, I'm sure he'll get no prison time. He knows too much about all the other criminal activities by the city council and other politicians. Still, I'm glad that he's worried for a change.

These not for profits are a city council members' license to steal. Let's see if Monserrate flips on his fellow thieves.
But let's not forget whose in the White House. Wealth redistribution and all that goes with that.

Nothings gonna happen to this guy ! These crooks take care and cover for each other like Arab brotherhoods.
His fellow theives are gonna back him 100% to keep the save their asses --just watch !
Especially cops and judges.

Ever heard of the "Wall of Blue" ?
Ask any trial lawyer, former cop, politition or fireman.

Don't forget that the guy in the White House appointed the people in the Justice Department. They're the ones who did the work, not the NYPD or the local DAs

I wonder how many more of the City Council is involved with corruption. I hope Monserrates sing like a canary & bring down some council members in south brooklyn.

Just glad to see another Queens Dem locked up.

I can't wait until he spills the beans on everyone else!

Who is coconspirator 1 (CC-1) mentioned in the indictment? Can't wait to learn.

Maybe girlfriend dumped him now that he has no job or city council funds to spend.