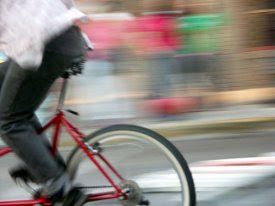 The New York Police Department plans to step up enforcement of bicycle safety in parts of the city that have seen a disproportionately higher rate of collisions involving bicyclists, city officials said Thursday.

The initiative, which would be aimed at common cycling infractions like running red lights or riding on the sidewalk, comes after numerous complaints about two-wheeled scofflaws and recent protests against new bicycle lanes added to streets in Brooklyn and downtown Manhattan.

“We’ve installed 250 miles of lane over the last four years and thousands of new bike racks,” Janette Sadik-Khan, the city’s transportation commissioner, said at a news conference. “We have been friendly to cyclists. Now it’s time for cyclists to be friendlier to the city.”
Posted by Queens Crapper at 12:40 AM

The most dangerous place to be a pedestrian is Central Park, where cyclists ignore the red lights and speed limits and barrel down the hills at high speed.

"We have been friendly to cyclists. Now it's time for cyclists to be friendlier to the city". - Burma Shave

Too many cops just drive around doing nothing anyways.

It's time they do a holistic overhaul of road violation ticketing that includes cars, pedestrians, and bicycles. All street users disobey the law, and all street users must pay the price for it, because together they are quite dangerous.

Ticketing all users will bring in more revenue to the city, also.

I don't understand why more cops don't step up their game for road violations, whether a car is speeding or blocking a bike lane, bike riders going the wrong direction and pedestrians crossing against the red light.

These all need to be enforced.

"“We have been friendly to cyclists. Now it’s time for cyclists to be friendlier to the city.”

"Friendly to Cyclists"??? How about they've been giving them a pass for decades fer crissakes?

Won't happen. Not a chance.

Full disclosure, most of you guys here would probably consider me one of those cyclists who shamelessly flout the law.

Honestly, I think this is a good thing.

To speak anecdotally, If I'm on a street with no bike lane, or only a painted lane that cars are ignoring, I have no qualms about breaking traffic laws designed for cars if I'm safer doing so (think about a left-turn-only T intersection with a red light... it's safer for a cyclist to get the jump on auto traffic than to wait for the green IMO.)

But, a short time ago, I was on the new Prospect Park West bike lane, blew through a red light, and was yelled at by a pedestrian walking next to me. My gut reaction was who does this guy think he is, until I realized I still blew a red light in what is probably the best infrastructure in the city. There was nothing I could say, it seriously shamed me into being a bit more considerate when actually shown that consideration by the city. I'll still get on my high horse if I got a ticket on a street without a bike lane, but on the PPW bike line I deserved a ticket.

It's New York, no one is going to be friendly to anyone. But it's not like all cyclists are anarchists. Improve the infrastructure and even step up enforcement (that shows bikes aren't continuing to be an overlooked mode of transportation) and they'll be slightly more friendly.

I have no qualms about breaking traffic laws designed for cars

Wrong. The laws are designed for all vehicles that operate in the street. Cars, motorcycles, bikes, and horse-drawn carriages.

Wrong. The laws are designed for all vehicles that operate in the street. Cars, motorcycles, bikes, and horse-drawn carriages.

They certainly APPLY to all vehicles that operate in the streets whether or not I think they're a good idea, but until the recent push out of bike lanes there was little to no thought put into how exactly cyclists are experiencing these traffic patterns. That was closer to my point.

I'm also one of the cyclists who routinely breaks traffic laws. I'll do something on my bike I would never even consider doing in my car.

But it's also contextual (for me, at least). I'll slow down to make sure no cars are coming before rolling through a red light in my neighborhood, but I never do that in Manhattan. In Manhattan I wait for the red, along with all the cars. I'm really not sure why...

It's almost as if being on a bike feels closer to being a pedestrian, rather than closer to driving a car.

Whatever... I sincerely hope they step up enforcement on us bicyclists. I get annoyed when I see other riders behaving in ways that shame all of us.

Bicyclists fear for their own safety -- they yield, slow down, and stop for cars and trucks that would hit them. They don't fear pedestrians in the same way and just take risks that results in pedestrians being hit.

*applause* I can't count the numerous times I was almost mowed over in a cross walk by a cyclist running a red light. Very few follow traffic laws.

I'd go a step further and require licences or plates for bikers who use streets. (not little kids on sidewalks) Something nominal, but just to reinforce that a bike is a type of vehicle, and requires validation.

Stopping for a red light on a bicycle when there's no pedestrian or vehicular traffic nearby is idiotic. You lose the momentum and thrrrill of the ride at that point. Be an American. Go through the red light already.

(And dump the tea in the harbor too.)

will they be ticketing the illegal immigrant delivery boys who clog the sidewalks?
Bicycles are not supposed to be on the sidewalk.
please deport them.they might like riding their bicycles back at home.

still waiting on our rollerblade lanes

Good. I was nearly run over by one of these idiots going to wrong way in one of those damn lanes yesterday. Then he proceeded to cross the intersection diagonally without even looking for any incoming vehicle. No turn of head, no even a slight slow down in his speed. OMG....what an idiot. These people are such dangers to pedestrians, cars, motorcycles and other bicyclists of course.

Yeah, they're going after them now.....OK. LMAO

The cops don't want to go after these people.
Think how hard it would be to catch someone who wants to get away. They can go on the sidewalk, go the wrong way on a 1 way, go between stopped traffic etc...
won't be easy to actually catch someone. and what will they get? A 25 dollar fine? BFD.

Fine them enough times, and they will be more careful, hopefully.

I see dozens and dozens of bikers everyday on 8th & 9th Avenues, and I'm not exaggerating when I say that at least 80% of them blow through red lights (when red).

"
I don't understand why more cops don't step up their game for road violations, whether a car is speeding or blocking a bike lane, bike riders going the wrong direction and pedestrians crossing against the red light.

These all need to be enforced."

Anyone that rides a bike in this city these days with cab drivers running red lights and soccer moms from Scarsdale in their Suburbans that can't see over the dashboard has got to be a moron anyway. The fun of riding your bike here is long gone. No one cares. And now the bicyclists don't care either.

This city is a piece of crap now.

What about all the noxious impatient drivers who force the cyclists on to the sidewalks to begin with? Put the cops on unmarked bicyce themselves and see who is wrong.