Part of Astoria's 36th street to be demapped 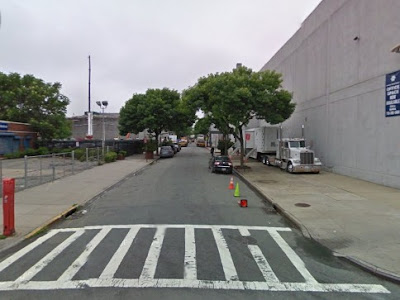 The Astoria studio that is home to "Sesame Street" has cleared its first hurdle in its plan to turn a city block into an outdoor movie set.

Queens Community Board 1 approved on Tuesday a proposal by Kaufman Astoria Studios to de-map 36th St., from 34th Ave. to 35th Ave., and then lease the space from the city. The block sits beside the Kaufman complex.

But not everyone was pleased with the board's decision. Some locals said the closure would increase traffic congestion and vowed to oppose the plan.

Beard said traffic problems will get worse, especially from Northern Blvd. to the Queensboro Bridge. It could also make dropping off kids at nearby schools difficult, he said.

Astoria resident Ron Vega, 52, said he also opposes the plan, noting there are already problems when the studio temporarily closes streets for filming. A permanent closure will make the situation even worse, he said.

"When I tell you from my heart that this is a bad idea, I hope you take it into consideration," Vega implored the board.

Studio President Hal Rosenbluth said the street closure will actually be good for the area and noted that emergency vehicles will be allowed to drive through the block.

Having an outdoor set, similar to ones in Los Angeles, will make the studio more competitive and able to land additional major productions, Rosenbluth said. And those films, TV shows and commercials can translate into local jobs and increased business for area merchants.

"It sustains the economic growth we've created," he said. "The neighborhood is going to be very happy in the end."

The proposal would allow the studio to lease the block from the city through 2049, said city Economic Development Corp. spokeswoman Julie Wood.

I thought they were leaving because the tax credits ran out.
Posted by Queens Crapper at 12:24 AM

About 60 outraged people showed up for the community board vote. Almost all spoke against it.

Overwhelming majority of the community board voted for it.

Interesting that during the vote not one local elected official was anywhere to be found.

"What are you going to do about it?" Boss Tweed.

Yea, but for whom?

This makes me ashamed to be a resident of Astoria. If you have the money Community Board 1 is for sale. I wonder how the street closure will affect the local businesses and schools near that street.

(off topic) but why didn't the EDC give tax credits to the manufacturing industries that have left this area, instead the factories and jobs have been replaced by condos.

Are there any residents or other businesses on this block?

Sounds like a give-away what is Kaufman giving the city to make up for the loss - forget the money that's a joke. The Kaufmans own substantial real estate portfolio around the city - they should give up something that the city residents can be reciprocated - not just money in this transaction.

Why can't they buy a stretch of private land and pave it to look like a street? When companies need land for a private purpose, they can acquire it from another private owner.

The loss of parking alone that closing that street will bring should be enough to outrage people, residents and business owners alike, in that area. Additionally, there is a Kaufman Studios parking lot with an entrance on that block - does that mean they will relocate the entrance to 34th Avenue, taking away yet more parking? or will those who park there be allowed to drive down the de-mapped street?

The problem is not Kaufman Astoria, for, being a business, will take advantage of an opportunity.

Like the millstone issue at Dutch Kills, where EDC and City Planning beat up on a community (and sustained a handful of local all but thugs to carry out their mandate) our local officials were MIA and their shoddy treatment of the community was sustained and abetted by the local presss.

This is what happens when a community has a weak civic structure.

As long as bikes can still use it it's OK.

Naw, check out the postings on Why Leave Astoria.

They are all ticked off ..... because the bike lane was closed.

This is about it.

So much for all the newbies coming into our community to 'revitalize' it.

CB 1 the community board from hell.

It sustains the economic growth we've created," he said. "The neighborhood is going to be very happy in the end."
--

Sure, all those Astorians with high end jobs at the studio and the thriving shopping on Steinway Street.

Lets see, the Dominican hair cutter by the subway, the empty burned out coffee shop a few doors down, the dish washers at Applebees, the largest Goodwill store in the city at the corner of 34th Ave....

.... but again, the problem is not the studio, but the politicans that permit them to beat up the community and the press that simply does not do their job by exposing this joke.

Wait till they add the out of scale hotel etc.

Those whole thing will be a colony walled off from the community, contributing little, but a black hole for tax credits and honest graft.

Funny how Studio Square is just around the corner. Is it true, as rumor has it, that the Vallones have an interest in it as they did in Cup and other places?

The closing off the street was something discussed for years.

It got the fast track start to finish in a matter of weeks.

Vallone? Gianaris? Baloney Maloney? Can someone call them to get a statement.

We know Simotis voted for it.

It will create local jobs? Yeah sure, for those with personal connections to this business.

the constant noise and chaos on the show encourages thug behavior in young children.

Wow, the Vallone issue is something I did not think about. Now he is involved with the Steinway Mansion.

Wel, at least my taxes are going for a good purpose: honest graft.

So much better that they have my money than my kids.

why is it that these kind of plans never seem to be public until all is said and done and only a small handful of people had an opportunity to find out about it and protest?
---

So that a small number of people can enjoy honest graft.

One wonders, of course, how the residents of the adjoining blocks- which are indeed residential and densely populated- are going to feel during night shoots on this outdoor set. When the good guys and the bad guys are firing their prop guns, and special effect explosions and car crashes are staged- AT NIGHT. Oh, does the idea of living across the street from high power theatrical lighting sound not sound exciting?
Do you think 311 will be the place to call and complain?
The borough motto should just be "Welcome to Queens, now go fuck your self"

Wasn't he killed in a drive-by-shooting?

You're one of the biggest fools I have ever seen post on this site.

How many times can those guys get away with this and still have cred in the community?

People are getting pissed.

George Delis, I hope you're retired and out of here and back in Greece living in your mansion by now because you are not welcome here.

One wonders, of course, how the residents of the adjoining blocks- which are indeed residential and densely populated- are going to feel during night shoots on this outdoor set. When the good guys and the bad guys are firing their prop guns, and special effect explosions and car crashes are staged- AT NIGHT. Oh, does the idea of living across the street from high power theatrical lighting sound not sound exciting?


They are mostly illegal aliens living in rent controlled buildings that you and me will never be able to live in.

The reason the fight was lost was because they made a bogus argument about traffic. How traffic works isn't just some ghost that we chase without explanation.

Basically, like it or not, traffic adjusts. A fundamental law of traffic is if you add space, more cars will fill that space. If you remove space, you get fewer cars.

Secondly, Astoria's proximity to so many train lines makes the parking/car argument a hard sell.

I think if the interest groups made an argument based on community fabric, or negotiated a deal where the street was used by the community/community groups for events and became a part of the community.

Also, if the car people weren't so opposed to working with the bike people they might have found an alliance that would have successfully fought it under the grounds that 36th street is a north/south Bike lane in the masterplan and this is not consistent with prior planning efforts. If Car folks could embrace sharing the road, again, I think this could have been stopped.

But the presence of specious jingoisms about traffic and parking just killed any chance the community had of fighting this bad idea.

Out of this whole project, 100% for the studio, there should be 5% for the community. I suggest that before this is "cast in concrete", that the type of street closure be considered( a fence is better vs a complete concrete wall, which will invite graffiti); that there be a bike or pedestrian walkway down 36th street, at least part of the time, if not every day.

Oct 25 Anon said:
Vallone? Gianaris? Baloney Maloney? Can someone call them to get a statement.

Response: THIS is NOT Vallone's council district 22; it is 26, was Gioia, now Van Bramer.

(except district 26 also gets the waterfront parks north of 34 Ave, a peculiar pinky on the district map ... how did that happen?)

ps: could not find these district maps on the council web site ...