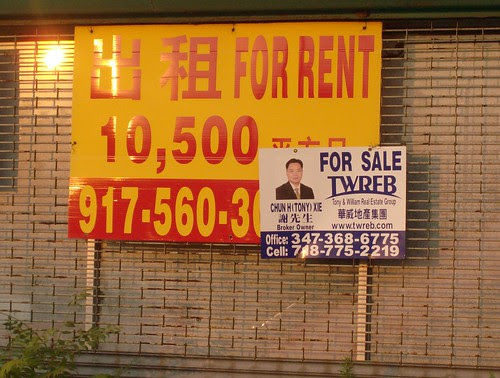 I am writing about the piece of crap at 37-19 College Point Blvd in Flushing. 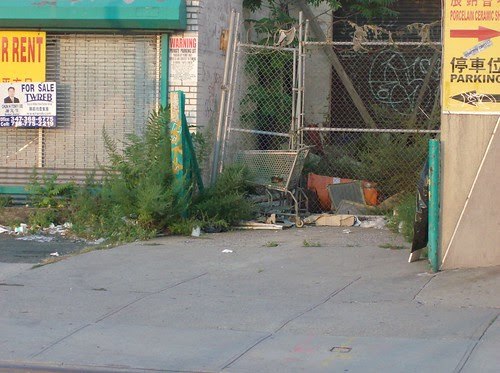 I can't tell you the actual name of the business because they never updated their signage from the last piece of crap that was there. It's one of those porcelain vase stores. Anyway, I have lived on that very block for almost 30 years. 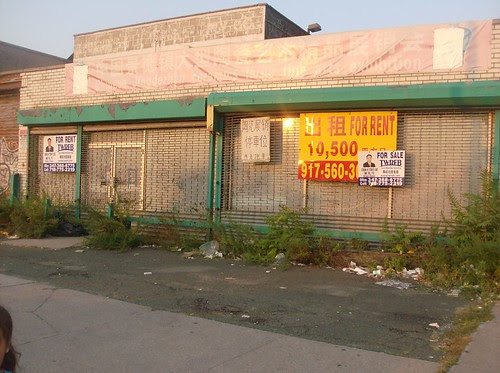 As you probably already know, parking is disastrous in that neighborhood. But the owners of this business feel they can use the street as they please for THEIR customers. The building was constructed over the driveway of an old business (a long family-run plumbing company that was run out of business like so many others in Flushing) and the curb was never reconstructed. So, the owner still calls it his driveway and late this past summer had my car towed. 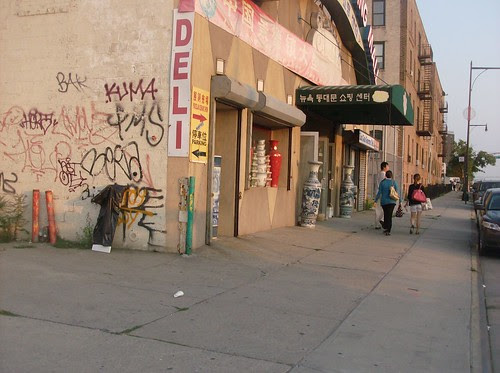 When I confronted him, he denied calling to have it towed but it clearly said on my ticket "complaint by owner." Furthermore, they use the closed plumbing business next door as a dump. Literally throwing their garbage outside. I am in the midst of fighting the ticket, have contacted the city, Councilman Peter Koo and even at one point was interviewed by ABC News about the last business who did the same thing. And nothing has changed! 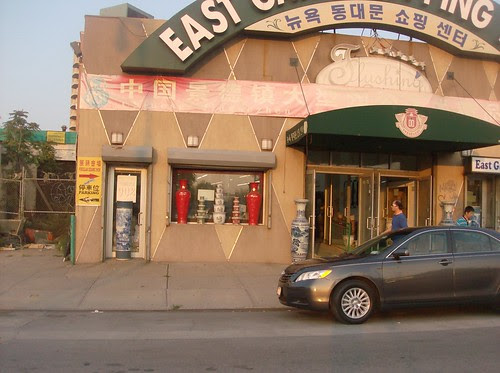 It's so unfair that if you are of a certain race in this neighborhood, you pretty much can do what you want without consequence. I have attached pictures to show the business and the garbage next door. These were taken a few weeks ago and there is actually more garbage there now." - anonymous
Posted by Queens Crapper at 12:00 AM

Mind your own business,round eye!

These photos portray a slum. Is this Queens or is this the south Bronx of 1977?

this is outrageous that this city should allow such decay to take place for the benefit of being "politically correct" to placate votes from illegal aliens.

This is disgusting. Helen Marshall and Michael Bloomberg, YOU are the problem. YOU let this happen. YOU need to set this city straight before your dictatorships have run out. This is YOUR legacy. Have you no shame?

Nope:( They have no Shame:( I've only been in Flushing for 17 yrs and it's changed drastically for the WORST!!! Uncivilized, selfish, Rude ass Nasty people!!! I swear I'm wondering if it's a Set up :( LOL Seriously!!! Oh Lawd I's a CONSPIRACY:( LMAO

when the immigration policies toward asians were laxed in the mid '60s the handwriting was on the wall. an explosion of legal and illegal asian's came flooding into queens. by the mid '80s flushing was overtaken and by the mid '90s they crept up to the city line. they came into bayside with shopping bags of money looking to buy houses. my friend sold his house to an asian who paid cash. when the buyer asked my friend what are you doing now? my friend replied i am selling my coffee shop and moving to florida. the buyer also bought my friends business as well also cash. where in the world do u hear of such a story? they have mounds of cash, they run strickly cash type business's, declare very little of there income and DON'T pay there fair share of taxes. go into any asian restaurant and see how they use the register as a change drawer. almost nothing is ringed up or recorded. the drawer is open and they use it to make change. classic!

It's a huge problem, and no one takes care of it. How was this building constructed without the driveway being lifted. To the person who wrote the Article. I have a DOB expediters card. If you want I will go with you to the DOB and we can pull the folder.
The Builders pavement plan should show that a curb should have been installed.

I am the person who wrote this. I deal with this kinda crap everyday. My sister is a building manager for a few buildings in Flushing and many times they come to rent an apartment, with a wad of cash, no proof of income and of course not a lick of english. I grew up here and literally watched this neighborhood change before my eyes. I feel like an outsider because they cater to another race. They have an Equality for Asians organization, but what about equality for the rest of us? I live right down the block, dont you think all that garbage brings rats?! And thats just the tip of the iceberg.

Thanks Joe, I will be contacting you. I have contacted Councilman Peter Koo, and after the 2nd attempt he responded and said he was angered and has sent the pictures to the DOB and DOS. Let's see...

Where do you suppose that they are getting all of that cash from?

"Where do you suppose that they are getting all of that cash from?"

10 people in a 1 bedroom apartment and not paying taxes. That's where the money comes from.

"Where do you suppose that they are getting all of that cash from?"

10 people in a 1 bedroom apartment and not paying taxes. That's where the money comes from.

And smuggling whatever they can (drugs, people, knock-offs, etc)

Its like that episode of MASH when 6 local people came into the camp for medical care all with the ID card in the name of "Kim Luck".

They will run whatever scam they can!

Where is this "Equality for Asians" you're speaking off? I don't believe such an org exists in Qns.

Most of these people are hardworking and not a problem. Everything you said about them people said about all of us when we came over. They work hard and emphasize education and respect with their children.

Raquel, you can contact me if you'd like at joefar75@yahoo.com.
Im curious as well. There is another huge problem with architects self certiying plans and contruction that are either not done, or not done to code or approved plans. Im sick of it as well. WE need people to take responsibility, and if they wont we need to make them responsible by telling the proper authorities.

Sorry, its actually "Asian Americans for Equality"...which coincidentally is right down the block from this very site.

again, how about equality for everyone?