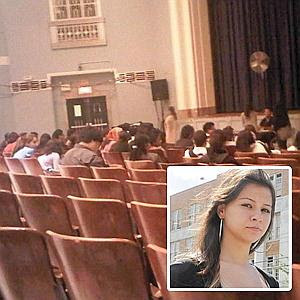 Scores of city high-school students have no class -- liter ally.

Nearly 200 students at William Cullen Bryant HS in Astoria, Queens, got a tutorial on tedium at the start of the school year, herded into the auditorium and forced to sit idle for some or all of their first six days. The delays have never been worse, sources said.

Administrators at Bryant -- Chancellor Joel Klein's alma mater -- had no schedules for them, blaming late registrations and crashing computers. Attendance was taken every half-hour, but no learning occurred.

"All we did was sit and do nothing. It was so boring. It was just horrible," said ninth-grader Melissa Galarza, who waited all week without classes. She went home Friday still without being assigned a single class.

Melissa joined a jam-packed auditorium on Sept. 8, the first day of school. Last week, the crowd of close to 200 dropped to 100, then to 50 or so by Friday.

"Don't worry about it. There's hundreds of other kids who still don't have a program," she said a guidance counselor told her.

Principal Aaron Perez referred questions to the Department of Education, which gave no explanation for the delays or the warehousing of kids without classes.

"Any student without a schedule will receive it by Monday," said DOE spokeswoman Margie Feinberg.
Posted by Queens Crapper at 1:03 AM

Is not Department of Education efficiency grand?

"All we did was sit and do nothing. It was so boring.

Sounds like a typical day in NYC public schools!

The NYC public school system is arguably the most worthless, corrupt, inefficient institution in the entire country.

It's a complete joke!

Hell, send 'em back to city hall, Albany, and Washington again and again.

Give them enough time to 'get it right.'

Besides, Astoria is 'saved' - right?