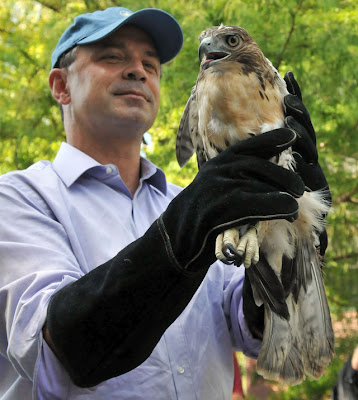 [Yesterday] Parks & Recreation Commissioner Adrian Benepe released a red-tailed hawk who was rescued and rehabilitated over the summer. The six-month-old bird of prey's nest fell off an air-conditioning unit (seriously, those things are dangerous if magical) and some bird lovers scooped him up and took him to a licensed falconer. The male hawk's return to the wild witnessed by Urban Park Rangers, Bobby Horvath of Wildlife in Need of Rescue and Rehabilitation (who helped care for the hawk) and first and second graders from P.S. 83 and the Dalton School.

Apparently, Mr. Benepe "forgot" to invite the folks who actually helped rescue the hawk - not to mention thank those who created the opportunity for him to try to get some positive publicity.

But this is what we can expect from a guy who slaps his name on the side of tree removal contractors' trucks.
Posted by Queens Crapper at 9:46 AM

Isn't this the same guy ( Benepe ) who may have not sactioned the killing of the Prospect Park geese, but didn't condemn it either.
Benepe is a big PHONY.

I wish this hawk would have pecked his nose off.

I hope a pigeon shits on Benepe's head. I hate this guy; he's not about park "wildlife". He's about carrying out another one of Bloomberg's slash and burn policies-this time, it's not the school system but the geese.

Photo op. The only asswipes not in the photo are Bloomberg and Quinn. Does this guy actually DO anything for New York instead of letting yuppies have their dogs crap all over our parks and not clean up after them?

He will be hogging the spotlight in history books when his political legacy will be of closing down the last historic beach club on Staten Island for a park no one wants or thinks the city can afford.

Does anyone have change for a 3 dollar bill?

Does he look smug or what? Smack