Is Bloomberg really ok with this? 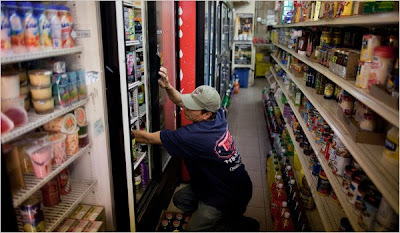 Night and day, the heavy front door rarely stops swinging. Men and women pass one another at the entrance of a four-story building on 21st Avenue in Bensonhurst, Brooklyn, on their way out to work, or back in for a few hours of sleep between shifts. They are line cooks, construction laborers, deliverymen, deli workers, housecleaners and gardeners.

A dozen of the building’s 16 apartments are occupied by Mexicans, and most of those have two families per unit, sometimes more. Except for a few women caring for small children, all the adults — about 50 — are employed. Most work long hours, six days a week, for minimum wage or less. Some have two jobs.

The building is a microcosm of Mexican industriousness in New York City. And there are hundreds of others like it, bastions of low-wage work, crowding and hope.

That success, though, has a flip side. One reason Mexicans have found work in such numbers, experts say, is that many are illegal immigrants, and less likely to report workplace abuses to the authorities for fear of deportation.

“Illegal immigrants are very convenient,” said Demetrios Papademetriou, president of the Migration Policy Institute, a nonpartisan research group in Washington. “Employers are quite interested in employing people who are willing to work and to overlook some labor laws.”

Several tenants in the Bensonhurst building said they had held jobs that paid less than the minimum wage. The tenants, who asked that their last names be withheld because they feared being fired or deported, said they had never been paid overtime compensation, were routinely handed the least desirable tasks and were sometimes forced to work on their one free day.

We must look the other way when we discover people living in overcrowded, unsafe conditions who are being abused at work because to do something about this would be anti-immigrant and racist. This is the Bizarro World we live in. And Lord knows, Americans and legal immigrants don't want to be line cooks, construction laborers, deliverymen, deli workers, house cleaners or gardeners, especially in this economy and with unemployment at 10% in some places.

It's funny, but after Fresh Direct was raided and forced to hire people who were here legally, they didn't collapse.
Posted by Queens Crapper at 12:31 AM

Hey
Whatever situation, Always try to focus towards the better living factors that make people to live in healthy environment.

One reason Mexicans have found work in such numbers, experts say, is that many are illegal immigrants, and less likely to report workplace abuses to the authorities for fear of deportation.

Illegals from anywhere and their employers illegally hiring them should be punished by the laws already in place to prevent or discourage fence jumping or employers hiring fence jumpers. Enforcement of Federal laws should be discretionary but rather all Federal laws obeyed under penalty of the laws.

How come Americans refuse to work hard like that?

Hey, as long is it's not happening in Manhattan, Bloomberg doesn't care. He loves his Sanctuary City, as long as the illegals don't come to his neighborhood in Manhattan. He only wants illegals in Manhattan to work their shifts as busboys, waiters and cleaning ladies.

if these buildings were filled with swedes or frenchmen, you wouldn't care.

We have to enforce our illegal immigration laws.

For those who say/think/believe that Americans won't do "that" kind of work, Fuck You with a capital F and a capital Y. YOU are the problem, because you think that kind of work is beneath YOU.

These jobs used to be honest because Americans kept them that way. Now it's almost like an infidelity, an adulterous triangle between the American employer, the American worker, and the house-wrecking illegal alien.

It's not even close to being racism, black and white agree that the jobs are best kept legal. I notice the Fresh Direct van that rolls by the Hunter's Pt 7 stop no longer carries Mexicans.

what the rich want is a large mass is a willing silent wage slaves available to work at a moment's notice and who will not agitate for their or anyone else's rights.

RE: AUNTI INVASION :if women and black males are unemployed.....it is rational that they have" no income "to compare with any workers who are.how did you dream up this fantasy ?