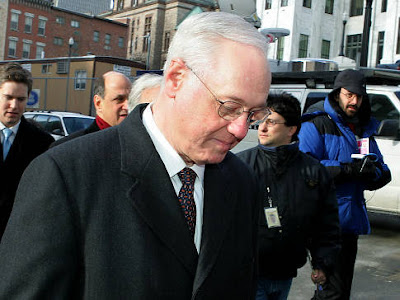 Disgraced ex-Controller Alan Hevesi is expected to plead guilty to a felony corruption charge for his role in a massive pay-to-play pension fund scandal.

A source with knowledge of the case said Hevesi's plea could come in state Supreme Court as early as today. Negotiations were still underway last night.

"They want to resolve the matter," the source said of the attorney general's office, which has been probing the scandal for more than three years.

AG Andrew Cuomo's team said "there is no agreement between the attorney general's office and Alan Hevesi. The office has an ongoing investigation."

It was unclear last night whether Cuomo will push for prison time. Hevesi resigned in 2006 after pleading guilty to a felony for using state workers to chauffeur his wife.

Until recently, Cuomo's pension fund probe had only touched Hevesi on the periphery - though almost all of his top aides were indicted, pleaded guilty or cooperated with investigators.

Investigators revealed in June court papers that Hevesi met regularly to discuss pension fund business with his political guru Hank Morris, who was slapped with a 123-count indictment for his role in the pay-to-play scheme.

Morris was "intimately involved in the day-to-day business" of the pension fund, court papers allege.

Firms wanting to do business with the fund were often forced to fork over campaign donations or kickbacks to Morris.

Israeli investor Elliott Broidy, who has pleaded guilty as a result of the scandal, admitted providing luxury overseas trips to a top controller official and his family.

Sources say that was Hevesi.

Does "and his family" include Assembly Member Andrew Hevesi?
Posted by Queens Crapper at 1:54 AM

is not liberal/democrat/progressive dictatorship grand?

the chickens are coming home to roost......and it looks like they are eating their own.....

And if Cuomo hadn't continued to prosecute this case you would be saying?

Come on Andy, throw Alan under the bus and I will vote for you.

"is not liberal/democrat/progressive dictatorship grand?"


It is, but ZOG is far more grand.

H.U.D. secretary initiates subprime loans to NINJA'S,(no income ,no job,no assets) and guarantees given by FANNIE MAE AND FREDDY MAC......his gang also marched in little neck/douglaston MEMORIAL DAY parade with cuomo name banners. that is not proper when honoring U.S.war dead ,who sacrificed for their nation.

did his family risk lives for the nation? shame,shame shame.....

Birds of a feather flock together. Cuomo is just as dirty as all the other politicians (criminals).

How is Queen Melinda involved in all of this???

Queens Melinda was Hevesi's babysitter years back and he took care of her by helping her get into politics. Guess he showed her the ropes.

Without question in several ways!!!

They are all phonies , liars, and crooks. Hevesi family : Have you no shame?

"They are all phonies , liars, and crooks. Hevesi family : Have you no shame?"

Lemmings of Forest Hills, Queens and the rest of the 28th AD, have you no shame? You could have voted for Joe Fox in the primary, but you'd rather remain "sheeple", so screw you all! It's your fault!