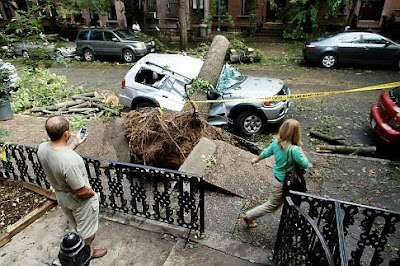 The city said Thursday it won't charge tornado-battered New Yorkers to replace the ruined sidewalks outside their homes and businesses.

Just don't ask when the repairs are going to get done.

Hundreds of workers across Brooklyn, Queens and Staten Island are still clearing trees and other wreckage left after two tornados and one nasty "macroburst" blew through the city last week.

"Right now, we have hundreds of unsafe trees everywhere," said Robert Holden of the Juniper Park Civic Association in Middle Village, a Queens neighborhood hit hard by the storms.

"We have dangling branches and giant branches sitting on other branches. It's an accident waiting to happen," Holden said.
Posted by Queens Crapper at 12:00 AM

Mayor Bloomberg dismissed complaints that the city hasn't moved fast enough. "We've opened all the streets. We've made sure it's safe," he said. "And now we're trying to work on the sidewalks, and we'll get to it as fast as we can. We just don't have any more resources."
Over a week later hazardous conditions still exist.
Just don't have anymore resources??
BULLSHIT!! Bloomberg can come up with millions to change the Manhattan streetscapes on a whim, but when Queens has a tornado it's sorry, we're tapped out right now. Be happy with what we are doing. Where is the outrage??

Bloomberg can come up with millions to change the Manhattan streetscapes on a whim, but when Queens has a tornado it's sorry, we're tapped out right now. Be happy with what we are doing. Where is the outrage??

You are paying taxes. You should not be cleaning parks and your front yard.

A developer has everything laid out for them and every city service at their beck and call.

A tweeded has a host of service all ready for them.

Dizzy Lizzy is such a stupid bitch! She looks like a idiot on t.v. arguing about such stupid bullshit. She lies out of her ass about being there for the people and then looks like a two year old arguing about it. Nice going Dizzy Lizzy! It's not bad that your district looks stupid for having you represent us but you go on t.v. and show the world what an idiot was elected. Do us a favor a stay off the air and just go hide in your tiny little office.

Queen politicians are asses!! They say they are going to change things in our government in our towns but they dont do anything Addabo I have never heard anything from him, usually they send out flyers or there are event that are planned to talk about things but nothing. Seriously no one cares about queens my tree that is about 100yrs old is leaning towards the street... it looks dead but when you call 311 all they say is parks and recreation take 3-5 days to review your complaint! thats all!! and you hear nothing else. I want a follow up from this!! If the tree falls not my problem it was reported!

Elizabeth Crowley''s performance in this video is laughable however what's not funny is that she got elected in the first place. Wake up District 30 and start electing leaders in your district, instead of party machine clowns.

Newsflash to Elizabeth Crowley....You serve our community you clueless mouthbreather. Stop worrying about the rest of the city and represent the people that voted for you. She can't even open her mouth without putting her foot in it at every turn. Middle village was one of the hardest hit areas that got responded to last. "The streets were clear the next day"....I'm pretty sure she must have been visiting forest hills or park slope cause our streets weren't clear at all.

Police presence in MV has and always will be a joke as long as we share a precinct with ridgewood. Mr Holden....Thank you for calling her and Bloomberg out on the BS excuses on live tv.

What an ass that Elizabeth Crowley is. I'm ashamed that she is a politician for my neighborhood. She said all of the streets were open on friday? There were about a dozen streets that were closed thru Sat. The night of the storm I didn't see one cop car. She's a liar.

DIZZY LIZZY GET OUT OF TOWN; GLENDALE, MIDDLE VILLAGE AND MASPETH NEEDS STRONG LEADERSHIP; NOT A BLOOMBERG BUTT-KISSING CLOWN.

Mr. Holden has been quiet for so long I thought he'd left this world. Evidently, from the youtube segement, he's back to his nastiness and throat cutting. It's no wonder that all Queens politicians ignore him and want nothing to do with him...with maybe one exception, but he'll wake up soon (no doubt when he doesn't do something that Mr. Holden wants).

What You Tube segment?