They'll even ticket you after you die 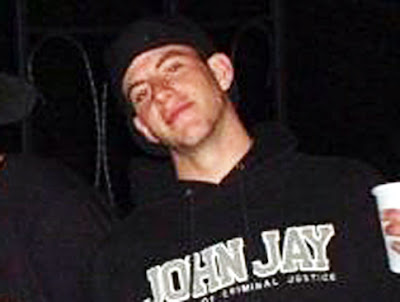 A Queens man was slapped with a parking ticket as he lay dead in the driver's seat of his car, cops and family said Wednesday.

Nicholas Rappold, 21, of Flushing, was slumped across the front seat of his Jeep Cherokee on 165th St. near 35thAve. Tuesday morning when a traffic agent wrote him up for being illegally parked during street sweeping, cops and family said.

"It's really messed up," the young man's cousin Patrick Hill told the Daily News. "While he was dead in his car, a New York City traffic agent gave him a ticket."

An hour after the ticket was issued, a friend whose house Rappold had left in the middle of the night spotted his buddy's vehicle still parked outside, sources said.

The curious pal went to see why the SUV was still there and found Rappold's cold body, sources said.

Investigators interviewed the traffic agent but found no wrongdoing. "He had heavily tinted windows," a police source said in defense of the postmortem ticket. "It was hard to see inside."

Police voided the parking summons after they released the vehicle to the family.
Posted by Queens Crapper at 1:09 AM

We heard that he tragically died of a drug overdose.

There is a rather suspicious house on the west side of 165th Street between Crocheron & 35th Ave. that has a long history of activity at odd hours.

It's been noted that possible drug dealing might have and is still going on there.

This has been reported numerous times.

Maybe now if the new precinct's new commander spots this post, he might be moved to attend to this!

Of course "a resident" is going to blame cops. Had he bothered to read the article, he'd see it was a traffic agent that wrote the ticket.

Of course "a resident" is going to blame cops. Had he bothered to read the article, he'd see it was a traffic agent that wrote the ticket.

I'm talking about the shady house on the block that the lazy 109th does nothing about.

Maybe they're all getting a cut at the precinct for all of the drug and prostitution activity that's going on in the vicinity for years!

True about the 109th PCT taking bribes from madams in the downtown nabe for allowing their whores to operate with immunity.

Two officers were arrested and charged with protecting an Asian madam & her whore house.

They got money and probably sexual favors in return.

This all happened about 2 years ago.

Since then I report any suspected drug or prostitution activity to Manhattan central or Queens narcotics.

Why give the 109th a heads up so they can warn the pushers and madams of a raid in advance?

It took me one call to the FBI to break up a human trafficking ring in my nabe after the local precinct didn't do squat...claiming that I was an alarmist!

The 109th has absolutely nothing to do with this story. Save your whining for another topic.

Yes, had been in rehab before, and he overdosed this time.

The house he was in front of, and had a friend at, has not had much trouble before it. A lot of kids going in and out and hanging around, but not really noisy and nothing that bad, before this.

The formerly (?) bad house being referred to is 35-58 165 Street, which is not the one this kid was at. 35-58 used to be real bad, especially when Ronnie Santos lived there, who was really nuts. In the mid 1980s, he took his sister hostage with a gun and the police had sharpshooters all around the house and it was on the evening news. Then some time later he was let back, but he dealt drugs, and was busted in 1995 and put in jail for a little over two years. No one has seen Ronnie around for years, and cars have stopped pulling up to the house at all hours, so 35-58 hasn't been a problem lately.

Since Ronnie was locked up in 1995, the street has been pretty good up until now. Even the house he overdosed in front of hasn't been bad - most of the kids who go in and out of there are normal.

In other words, Ronnie has nothing to do with this story. Got it. Thanks for the overshare.